Home History The most ancient history of Bulgars – 2 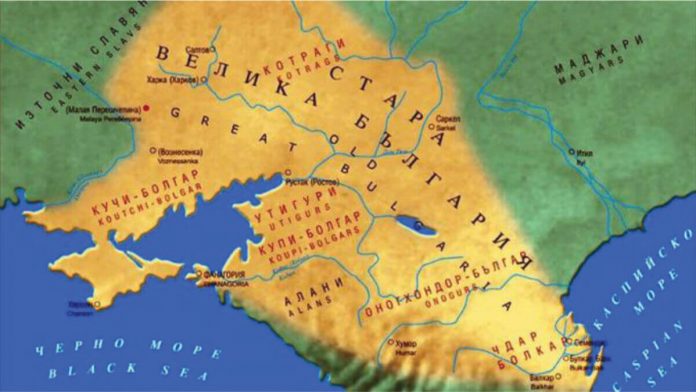 Right before the campaign Salahbi decided to buy a horse and went from the Bulgarian balik Aka-Basar to balik Haldja, which is also called the Khwarezmian balik. There he zeroed in on a Türkmenian horse named Djilan. However, while buying he dropped a coin under the legs of the horse and imprudently bent down to pick it.

Djilan, trained to stamp down in fighting the foot soldiers, immediately struck him with a hoof and killed him on the spot. Almysh was shocked by the loss of his loyal djur and was personally present at the Salahbi’s funeral. A part of Sadimians hired by Salahbi soon after the funeral went by Aikha-yuly road to their land, and the planned campaign did not proceed… Another part of the Sadimians went to Djir together with the Salahbi’s son Hum, appointed by Almysh as a new Bulgarian viceroy of Djir.

When those who sailed to Sadum returned to Djir, they told Hum, that his grandfather Erek is still alive and that after the decimation of Khud he took to in memory of him the name Khud. In 925 AD Hum was kicked out from the Djir by Ugyr, but in the same year was reinstated by Almysh.

In 943 AD Hum was sent by Kan Yalkau to a raid against Gurgja, where again began the oppression of the local Hons or Sevars. Hum’s troops sailed in the ships to Itil, where Modjar in a self-confidence tried to stop him. Angry with shots from the shore, ours landed close to the palace of the Khakan and took it by storm. The Bek was killed, and his protege Jusuf fled to the Kumans. On the Khazarian throne sat, without special ceremonies, Alan, released by the Itil Burdjans from a dungeon.

The new Khakan immediately let the passage of our group to the sea. Crossing the sea, Hum sailed up the Karachai river to the city Alaberda. Though it was a Moslem city, but they were strongly connected with the infidel Gurdjans and the Modjars, that’s why they met ours with extreme hostility and refused to let them pass to the Gurgja. For a few days Hum tried to appeal to the conscience of these people, who sold out the fellow tribesmen for the sake of a profit, and then at sunrise seized the Alaberda citadel and offered the Bek of the city to conclude with him a treaty about the free passage of the Bulgars to the Gurgja and back. But the vali of the city was even more self-confident than Modjar. He decided to become famous with a victory over the Bulgars and ordered the inhabitants to prepare the storm of the fortresses.

When even the Gurgjians, frightened by the appearance of the Bulgars on their borders, released the leaders of the Sevars to the Bulgars in the Alaberda, the vali seized these biys and attacked the citadel. Not achieving any success, the Bek treacherously offered to Hum to leave the city in exchange for the release of the Sevars and a tribute. The Ulugbek of Djir agreed, but when he left the citadel, the vali attacked him. The ours broke through and returned, but Hum was fatally wounded. On the death bed, he regretted the skirmish with the Moslems forced upon him, and so bequeathed to his son Syp to donate all the spoils to the mosque.

With these means in the Nur-Suvar was built a two-story mosque “Al-Hum”, which beautiful building from the side reminded a kumgan, and the gallery on the south as its handle. The walls of the mosque were decorated with an amazing ornament and with images of the birds and animals. Around it was arranged a wonderful garden with a small lake in the centre, and it became the main attraction of the city…

And Syp quite often sailed to Bashtu, transporting his ships from the Idel to the Shir by Bekhtash, and thus received a nickname Shambat. He was friends with Salman, who was sailing with his father to the Alaberda. And their possessions were next to each other, in the Ulem ulus. And other possessions of the descendants of Hum, which were called a house of Utar after their ancestor Khud-Erek, were by the rivers Chu-yl and Adidel. From this house came a lot of great salchibashes, ferry owners and merchants, who were sailing to the native land of Ugar, the northernmost Sadum, the Urman.

Once the ship of Syp-Shambat got in a terrible storm, and he in fear appealed to the mercy of the Almighty, promising in the case of the safe outcome to accept Islam. The Creator spared the sailor, and Syp-Shambat after the arrival in the Bulgar took a name Gusman… On his money, he erected a fortress Gusman on the river Djuk which became the main one on the Hukrat way to the north. And this Yul began in the Bolgar.

From the Bolgar they sailed on the Agidel and Nukrat-su, and then went to the fortress Gusman, where the roads from the Djir and Bolgar joined. And from the Gusman-Katau by the Djuk and Tun they came to the river Bishek, on it they reached the Biysu tributary Oshma and by the Oshma also were coming to the Biysu. The branch of the Hukrat road that went from the Bolgar by the Agidel and Chulman to the Biysu was called the Chulman road.

And about the origin of the names for these rivers the seid Yakub wrote the following. Once the son of Aiha Mizan sailed from the Urman to Biysu and decided to shorten the way, not to go to the mouth of the Biysu, where was the city Ak-Artan, but to cut through a shorter way. He landed in the mouth of a river which began to be called by his name, and then by its tributary went to the Biysu. The Shudian biy pursued him and fatally wounded his fellow merchant, Bozay. Therefore the small river received his name. Then Mizan was fleeing from the pursuit, almost without resting, by the left tributary of the Biysu, and nicknamed it Yalitmé.

This name later turned into Djalna. Only at the Biysu, where were patrols of our Biysuan Ars, he could, at last, take a rest. From Biysu he, already in complete safety and without haste, went south by the river which he named Ashkyma, and in a due course, this word became Ashmaм… The Mizans were engaged in trade, mainly of the northern goods, the canine teeth and horns of the water and field Ajdakhi, furs, honey and wax. At this, they were tireless in their travels. The son of Mizan was even was nicknamed Ülbat… To his son Bulan, the Kan Mohammed ordered to sell the right for the collection of the tribute from the Ars of the Ish district, that’s why he was nicknamed Ish-Bulan. Once to him, on the river Sudju, came the buyer of his goods from the Azerbaijan, Minas, and asked to tell him about the road to the north. ”What for do you know it?”, asked surprised Bulan.

-” The goods from the north are always sold at fabulous prices, and it is explained by the difficulty of the road to the north. I do not believe it and I want to buy these goods right there”, answered Minas. ”But it is truth, and only the extraordinary hardy person, knowing the environment and the customs of the peoples of the North can reach it and return, and even that with the greatest risk for his life”, objected Ish-Bulat, trying to stop the merchant. But he excited even more and accused Bulan of trickery.

Then the son of Üulbat pointed to him the safest of all the roads to the north, The Nukrat road, and suggested to accompany him, but Minas refused and went alone. To the present date, he did not return and disquieted Bulan went to trace him. Near the mouth of the river Ot, the left tributary of the Nukrat-su, he found a block of ice with frozen in it Minas… As soon as the rivers opened, Ish-Bulan came again to this place and buried the merchant, and gave to his son his name. The river Ot after that began to be named Kilmes (“No Return”)…

And shortly before the death of Salahbi died his wife Gazaya, the Кwaresmian Musallah, and after her died Bat-Ugyr, who just returned from Khazaria. 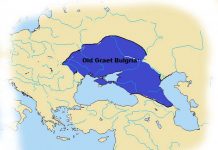