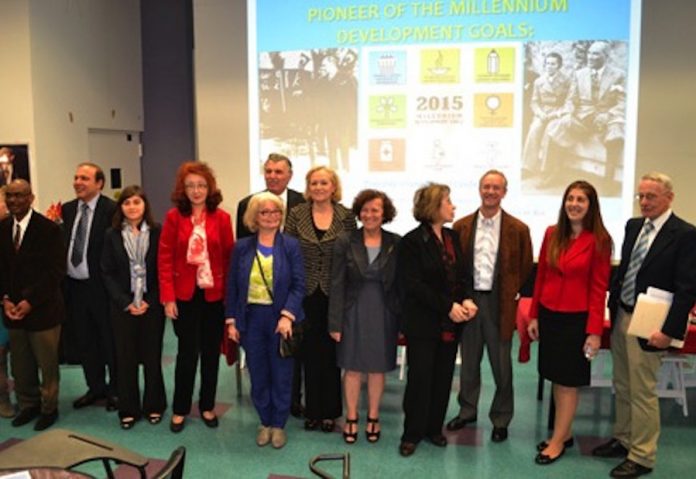 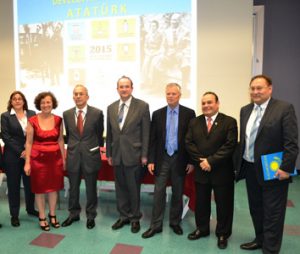 The Light Millennium and the College of Arts and Letters at the Stevens Institute of Technology jointly presented an international conference on the Millennium Development Goals of the United Nations and their relation to ideals advanced by Mustafa Kemal Atatürk (1881-1938), founder and the first president of Republic of Turkey. The two-day conference was entitled Pioneer of the Millennium Development Goals: Atatürk and, The conference was held on the campus of Stevens Institute of Technology in Hoboken, NJ, on Friday, April 19, and Saturday, April 20, 2013.

One of the most accomplished world leaders of the 20th century and founder of Turkey, Mustafa Kemal Ataturk’s (1881-1938) visions, principles, and their implementation from the 1920s on until his departure in 1938, which are nailed down as the pioneering acts and development programs on the multiple level and dimensions as well as from global perspectives of the Millennium Development Goals for 2015 during the Pioneer of the Millennium Development Goals: Ataturk – A Two-Day International Conference at Stevens Institute of Technology in Hoboken, New Jersey on April 19-20, 2013.

High Level Inaugural Session of the conference dedicated to the Eight Goal of the Millennium Development: Global Partnerships and International Peace.

Co-chair of the conference, Prof. Foster, opened the Inaugural Session of the conference by inviting Dr. Nariman Farvardin, president of Stevens Institute of Technology, for his welcoming remarks. The dean of College of Arts and Letters, Dr. Lisa Dolling, followed Dr. Farvardin with her own welcoming remarks. She articulated the importance of Ataturk’s dedication to art and science education and the need to imprint ethical responsibilities on students. Then Prof. Foster invited Bircan Ünver for her own concept that led to the conference. 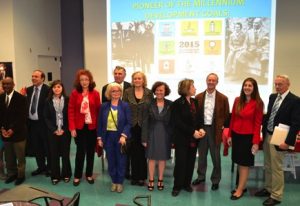 The morning session of the second day was dedicated to the “Empowerment of Women and Gender Equality, and Universal Education” moderated by David C. Cuthell, Adjunct Associate Professor, Columbia University.

During the second day of the conference there were very interesting spectrum in between the different presentations that each of them has brought it one of the key angle’s of the Universal Education, Women Empowerment and Gender Equality as well as the Eradicating Hunger. At the same time, some of the presentations act as the other counterpart of each other such as Prof. Dr. Nezih Orhan and Research Assistant Efe Gozde’s paper on Village Institutes and Universal Education and Robert Weir’s power point presentation on Universal Education; presented in debt Turkey, India and on the global level MDG#2 and literacy level and comparison came it naturally in the minds of the attendees. Similar conceptual connection and another corresponding item came in with Mrs. Sally Shatila Kader’s keynote on Middle East and Arab Spring and Dr. Hamid Akin Ünver’s paper entitled “Sovereignty and Legitimacy as the Basis for Peace: Atatürk’s Principles and the future of the Arab Spring.”

Ataturk Society of America, Dr. Gul Çelkan, Judy Light Ayyildiz and Seden Anlar’s papers offered from multiple angles of the MDG#3 “Women Empowerment and Gender Equality” in Turkey both from its pioneering and inspirational qualities and values as well as its historical perspective. A combination of these also have escalated Ataturk’s role, principles, vision and importance a much more higher global ladder and conscious, which are more relevant and needed in the present time. (Please see Full Report of the Conference).

Dr. Sebahattin Devecioglu’s paper brought it another angle both from the Ataturk Era as well as UN-MDGS with a proposal that development programs and investing in Youth and Sport should be included Beyond the 2015 Agenda of the MDGS.

Afternoon session of the second day of the conference presented “Global Partnership and International Peace” from the academia, NGOs and independent thinkers that also act as the counterpart of the Inaugural Session.

Prof. David Cuthell presented of Atatürk “as the man” of Atatürk rather as an icon or god-like figure, which also has served to Atatürk’s his own vision about himself as Prof. Kinzer’s quoted by Atatürk during his keynote presentation: ““I am leaving no sermon no dogma nor am I leaving as my legacy any commandment that is frozen in time or cast in stone.”

In the “Peace vs Pact: Mustafa Kemal Atatürk’s Concept of Peace” paper, which presented by Prof. Foster, its author Prof. Özer is highlighted Ataturk as an humanitarian who believed in the equality of nations, and his urge for activisim for the protection of the future of the world as a whole (secularism, education, women’s rights). She also redefined of Leadership with reference to Atatürk’s stance in the face of wars and domination putting an emphasis on his concept of Peace.”

Rev. James Bestman strongly emphasized the urgency to achieving the MDGS in Liberia, in particular, achieving “eradicating hunger” through “universal education”. Rev. Bestman and LCA-Global Initiative also brought in Africa, and one of the least developing countries in our time that also has added tremendously to the overall goal of the concept that is presenting the conference from the global perspectives and on the global level.

Prof. Vassillopulos’s metaphorical and powerful comparison of “Homer and Ataturk” as well as focusing on Ataturk’s “reconciliation” with the neighboring countries immediately after forming of Turkey as well as to prior “enemies”, who were invaded of Gallipoli, and Atatürk message to the mothers of the lost soldiers, “now, your sons are also ours” created a sensational moment at the conference that is alone still stands out one of the most unique examples how a military commander has transformed to a “peacemaker” with the world immediately followed by the forming his own country! This quote also brought in both emotion and a better understanding of Ataturk’s vision for international peace as well as, Prof. Vassillopulos being from a Greek background, added further in debt mean and value to the dedication theme of the conference and the afternoon session of the April 20th.

Prof. Özay Mehmet focused from the economic development agenda in his paper and suggested to the western countries policymakers and to the United Nations to take another approach to achieve the MDGS such as taken up a combination of Ataturkist and Gandhian perspectives for achieving the MDGS.

With all above mentioned that the conference also has brought in several proposals to be included into the Beyond 2015 Agenda of the MDGS.

As it was initially announced, Dr. Aysegül Durakoglu presented a paper entitled “Atatürk: Creating a Universal Language in Turkish Musical Culture” from the cultural implications of Atatürk’s development agenda in the 1920 and 30’s as the concluding session of the conference. A selected and very impressive piano performances from this era presented. Young talent violinist Yigit Karatas accompanied to Dr. Durakoglu.
[For the April 20 REPORT, please click on this link.]

As the overall conclusion of the High-Level Inaugural Panel as Prof. Stephen Kinzer is commented on the following: If Ataturk were alive today, he would’ve be a perfect Director of the Millennium Development Goals (or Secretary-General of the United Nations). Prof. Kinzer also emphasized and illustrated Atatürk was a very inpatient that might have been caused his early departure, he commented.

With Atatürk’s inpatient personality, forceful and visionary mind, if Atatürk were alive today, indeed, he would’ve been able to achieve the MDGS as in full by 2015!

The conference is directed by Bircan Ünver of The Light Millennium and co-chaired along with Prof. Edward Foster of the College of Arts and Letters at Stevens Institute of Technology.

Special Thanks to: Hande Subasilar, Alternate Representative of The Light Millennium to the Department of Public Information of the United Nations.

DISCLOSURE:
This Summary may be fully reproduced under the following conditions only:
1. “This SUMMARY of the PIONEER OF THE MILLENNIUM DEVELOPMENT GOALS: ATATÜRK” International Conference was originally e-published by The Light Millennium.”
And, below hyper link to the actual webpage should be included:
http://www.lightmillennium.org/ataturk/2013/conference-summary.html
2) For the post-production of the conference’s video-recording as a mini television series (4+1 Highlights) ot 6+1 parts) to be edited and scheduled in Fall 2013; The Light Millennium (with tax exempt/501c3 status) is seeking for sponsorships and donations for post-production of this mini-series. If you are interested in sponsoring it, please email to:LMTV@lightmillennium.org.
3) Timeline of the Book Publishing: Depending on availability of sponsorship, in Fall/Winter 2013 or Spring 2014.
4) ALL the presented PAPERS at the conference will be available on The Light Millennium’s website.

Cypriot Turks in ‘’Dawn Turn’’ and Bosnians Waiting for Their Identities...