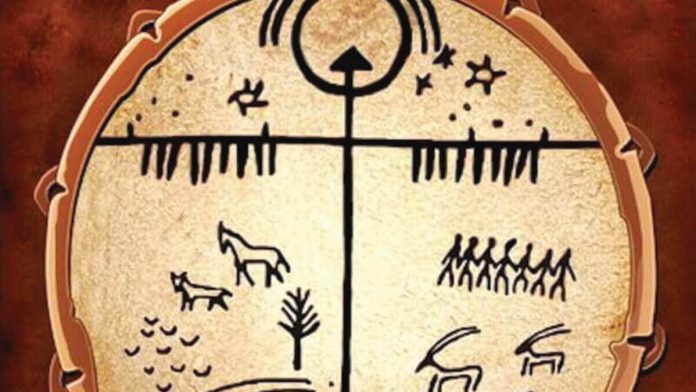 A chapter on Tengrianism from the book of Murad Adji

The iron sickles and axes, pig iron ploughs, warm log huts, graceful palaces and towers, carriages, cabriolets, coaches and many – many others the hardworking Türks presented to the mankind. Here they are, the actual achievements of the ancient Türkic culture! In front of us… In the olden time in Altai it was said: “Everything is good and evil, the poverty and riches are given only by Tengri”.

It is truly so.

The Celestial GodWho is Great Tengri, the heart of the Türkic culture? Tengri is an invisible spirit living in the sky. Huge. The size of the sky, of all the worlds. Therefore, the ancient Türks respectfully named Him “an Eternal Blue Sky” or “Tengri – Khan”. A title “Khan” specified His supremacy in the Universe. He is a Supreme God, Creator of the world and of all existing on the Earth.

A Lord. About Him are preserved ancient legends, they have not been forgotten. To understand the wisdom and depth of faith in Tengri, the people themselves should understand one basic truth: “the God is uniform, He sees all”. Nothing can be hidden from Him. He is a Master and a Judge. The Türkic people then lived in trepidation of God’s Judgment. But not with fear!.

The people were sure: there is a Higher Justice in the World. It is God’s Judgment. And nobody will escape it, neither king nor slave. The god is protection and punishment in one! It was the base of the faith of Türks in Omnipotent God.

The highest achievement of the spiritual culture of Türkic people is the religion; people left paganism. They addressed Tengri in unendingly different ways: God (Russ. Bogdo or Boje), Khodai (or Kodai), Allah (or Ollo), My Lord (Russ. Gospodi or Gozbodi). The mountains of Altai already heard these words two and a half thousand years ago!

There were, certainly, also other ways of addressing Tengri. But the word “God” was said more often than others, it meant “to obtain peace, calm, perfection ». With God, the Türks went now in battle. With God, they started any difficult task. The word “Khodai” (literally “become happy”) was different, it showed that Tengri is Omnipotent in this world.

The Creator, Maker of this world. From here is Omnipotent, Giving Happiness.“Allah” (Ala) the ancient Türks said less often, only when asked Great Tengri – Khan for something… About most sacred… This word came from Türkic “al” (arm).

In other words, “giving and taking”, that what meant “Allah” at one time. Saying it, it was necessary to read a prayer and to turn the palms of hands to Eternal Blue Sky. And the word “My God” was infrequent, only clerics had the right to pronounce it. Literally it means “enlightenment of eyes » or “giving enlightenment ».

It is a higher call to Tengri, most sacred. It had a very deep philosophical sense. The spiritually pure righteous asked direction for the true path, to understand what stands behind the visible side of the experience.

With years the rules by which the people prayed were refined, celebrating holidays, observing fasts. These rules were called rituals. Clerics led the rituals. The Türkic clerics differed from the other people by clothes and radiant thoughts. They walked in lengthy dressing gowns (caftan, epanche) and pointed hats (bashlyk).

The clerics of higher grades wore white; the other clergy wore black clothes. Naturally, on the rocks of Altai, the ancient artists also pictured clerics. We now know what they were, these mysterious “white wanderers”, as they were named by the people.

They were the preachers of the faith. As a sign of Tengri – Khan the Türks selected a direct equilateral cross, named “adji”. It should be noted the cross also existed before as a sign of Türkic culture, and there also was a “slanted” cross, a sign of hell and of old underground gods. Initially, adji were artistically simple, and then became the real works of art, made by jewellers: the surface of the cross was golden plated, decorated with precious stones, to shine and please the soul.

On Altai, the oblique crosses appeared about three thousand years ago. To speak strictly, they were not crosses. It was the Europeans, who found out about Tengri faith, that described them as crosses.

Rays of the sun!. More correctly, rays of divine blessings coming from a single centre. They are the signs of Celestial nature, which forever marked the Türkic spiritual culture.

In could not be any other way for the people that believed in the virtue of Eternal Blue Sky. Sometimes to the cross-like sign of Tengri was added a half-moon. And that attained an absolutely another sense: it was a reminder of time and eternity. For the ancient Türks understood time as a unity of the Moon and Sun. (And from here originates their calendar with 12 years cycle.)

The sign of Tengri was embroidered on the battle banners. It was worn on the breast, hung on a chain. It was tattooed on the forehead. The artists weaved it in arrangements and ornaments. And how could it be different? From here come the national traditions.

The Nagorno-Karabakh analysis by Sinan OĞAN is published in Hurriyet Daily...