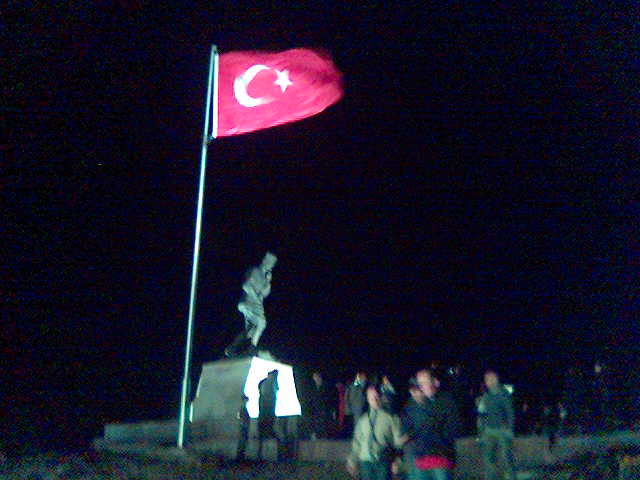 At 5:30 AM, Tuesday morning, 26 August 2008, ‘’The Attack Concert’’ started with the master of ceremonies reading the opening section of Mustafa Kemal Ataturk’s ‘’Speech’’:

Landed at Samsun on the 19th of May, 1919. This was the Present Situation of the Country
The group of Powers, which included the Ottoman State, Germany and Austria-Hungary, had been defeated in the Great War.

The Ottoman Army had been crushed on every front. An armistice had been signed under severe conditions. The prolongation of the Great War had left the people exhausted and impoverished.

Those who had driven the people and the country into the general conflict had fled and now cared for nothing but their own safety. Vahdettin, the degenerate occupant of the throne and the Caliphate, was seeking for some despicable way to save his person and his throne, the only objects of his anxiety.

The Cabinet, of which Damat Ferit Paşa was the head, was weak and lacked dignity and courage. It was subservient to the will of the Sultan alone and agreed to every proposal that could protect its members and their sovereign.

With the conductor, Burak Tuzun’s signal, the 60 member Anadolu University Symphony Orchestra and the 65 members of the Anadolu University State Conservatory, started the concert, high on the famous hill, Kocatepe, which was Mustafa Kemal Pasa’s headquarters for  conducting one of the most important decisive battles of  Turkish history, known as Baskumandanlik Meydan Muharabesi – Battle of the Generalissimo.

The first piece, Bozkir – the Plains, was a tribute to the barren hills around Kocatepe, which is now being planted with trees by the Ministry of Forest and Environment.

Following other beautiful pieces, including the ‘’Voice of the plains,’’ the concert ended with the song ‘’Yasa Mustafa Kemal Pasa’’ which were sung by everyone with tears in their eyes.

The Governor and the Mayor of Afyon and many dignitaries with several thousand spectators, including the young and the old, men and women, representing 50 universities and many civic organisations, who had come from many of provinces of Turkey to commemorate this important event, were at the concert. The group of 8 students sitting next to me were from Dicle University, who had come all the way from Diyarbakir.

The liberation of Afyon, 86th Anniversary

The program as part of  celebrations commemorating the 86th anniversary of liberation of Afyon was started on August 25 by the Municipality of Afyon, which will last for a week. On August 25, a group of students walked 19 kilometres from Suhut, a town nearby, all night to Kocatepe to take part in the celebrations.

Leaving the buses and the cars below, everyone walked for over half an hour to reach the top of the hill and visited the statue and took photographs (Attachment 1).

Across from the top of Kocatepe, everyone could see the many barren hills which were the scene of battles in 1922. The crescent moon was directly above and the wind was blowing hard, forcing many to purchase blankets sold in a makeshift store.

At the very spot where Mustafa Kemal Pasa’s famous photograph was taken as he walked to answer a phone call from one of his commanders early in the morning, stands a life-size statue with the following inscriptions (1):

Throughout the concert, the master of ceremonies read additional sections from Mustafa Kemal Ataturk’s ‘’Speech’’, giving a sense as to how the Nationalist Forces had come to the Afyon plains. Greeks with the support of the British Empire had landed in Izmir on May 15, 1919, just a few days before Mustafa Kemal Pasa had began his famous trip to Samsun. The Greek forces, under the leadership of King Constantine, who had high hopes of even capturing Istanbul, began advancing towards Ankara.

Periodically, the Greek Headquarters were inspected by the British Military Commission.
Mustafa Kemal gathered all the forces that he could to fight the invading Greek army, which was limited since it was impossible to enact a general mobilisation.

Greek army brought catastrophe wherever they came, killing, raping and putting villages and towns to fire. The Nationalist forces had to retreat until they could regroup and begin a counter attack from West of Sakarya river to drive the Greek forces back.

The Sakarya battle lasted 22 days and nights, considered as one of the greatest achievements in military history. It marked the decline of the Turkish forces and emergence of an army capable of defeating armies twice its size under the leadership of Mustafa Kemal Pasa.

On September 17, 1921, the Grand National Assembly gave Mustafa Kemal the rank of Marshal and the title ‘’Gazi’’, the most prized title which was also given to Maresal Favzi Cakmak following the Battle of the Generalissimo.

At 5:30 AM, 26 August 1922, Mustafa Kemal Pasa gave the orders for the attack and the artillery began pounding the Greek positions which took them by surprise.

The Turkish infantry and cavalry followed through the fortifications which had been destroyed by the artillery and the front line of defence were captured by the Turkish forces. On the second day, Afyon fell and Mustafa Kemal entered the city with Chief of General Staff  Fevzi (Cakmak) and General Ismet (Inonu) the front commander, followed by other commanders Nurettin and Yakup Sevki.

The battle continued at Dumlupinar and on 30 August, Mustafa Kemal Pasa gave orders for the attack and the main body of the army to march to Izmir and the rest to Eskisehir. The battle was won and the top commander of the Greek forces, General Trikopis was captured together with his commanders and over 5,000 soldiers near Usak. On September 1, Mustafa Kemal Pasa gave his famous order, ‘’Armies! Your first objective is the Mediterranean’ Forward.’’. The Turkish forces entered Izmir on 9 September 1922, travelling a distance of over 300 km from Afyon.

According to many historians, the conquest of Anatolia was accomplished in three stages. The first was the victory of Malazgirt Battle in 1071. The second one was the establishment of the Ottoman Empire following the unification of many Turkish principalities across Anatolia. The final conquest was achieved with the liberation of Izmir that began on 26 August 1922.

On this date, Ataturk secretly travelled to Konya and on to Aksehir and to Kocatepe where he decided on the ‘’Great Attack’’ after consultation s with İsmet Pasa and Fevzi Pasa.
Historian Gurbuz Azak, in one of his articles, states: ‘’Turks are members of a great nation. Histories of countries in Europe, Asia and the Middle East can not be written without devoting 100 pages to their involvement with Turks.

We need to acknowledge the following fact: There are only four nations in the world which has preserved its identity and existence throughout history: Turks, Chinese, Arabs and the Iranians. You can not find the fifth one. This monumental truth should be the pride of the young generation.

26 August 1922, is the symbol history of the third conquest of this beautiful country. No one should worry, if the motherland calls for ‘’Help’’, it will definitely witness a fourth resurrection. (2)’’

Nazim Hikmet memorialized this historical event with the following poem: