Home General Articles Culture 85th Anniversary of the Turkish Republic and Journey to the History of... 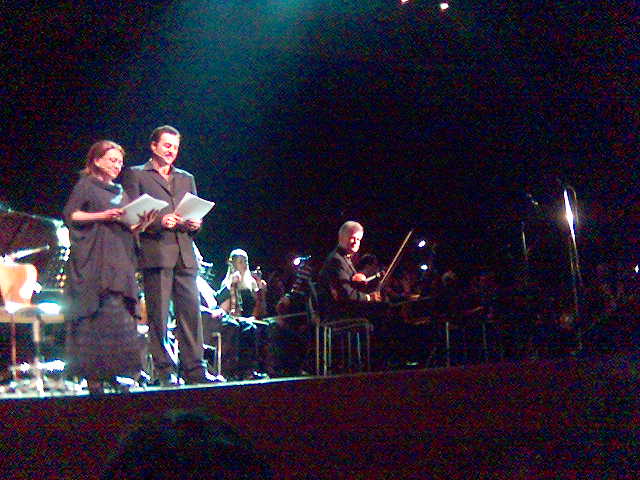 As preparations are getting underway for the celebration of the 85th Anniversary of the Turkish Republic on Wednesday, October 29, with Turkish flags and Ataturk posters everywhere, many organisations are busy presenting concerts, symposiums and other activities in Istanbul and across Turkey. One of these took place at the Lutfi Kirdar Convention and Exhibition Center on Friday night to a full house which was both first of its kind and will be remembered for many years to come and perhaps repeated in 2023, on the 100th anniversary of the Turkish republic.

Tekfen, one of the early Turkish construction firms that started in the fifties and left its mark on many projects worldwide, presented a ‘’Republic Concert’’ on the history of the Turkish National Anthem. Thirteen anthems (one lyric, twelve compositions) among the 100 candidates that were submitted back in 1921 were performed for the first time by Tekfen Philharmonic Orchestra, including the selected  Anthem of Independence (Istiklal Marsi) written by poet Mehmet Akif Ersoy. Among the audience were AKP Deputy Nevzat Altintas, Hurriyet columnist Tufan Turenc, famous singer and sister of Oktay Sinanoglu and many other dignitaries.

The program was presented by the actor who played Nazim Hikmet in a movie and Aysen Gurzap who alternated reading segments on the War of Independence (beginning with the victory at Inonu and ending with the battle of the Commander in Chief on August 30, 1922) in between each anthem. Over 60 members of Tekfen Symphonic Orchestra conducted by Saim Akcil and TRT Istanbul Youth Chorus with over 50 members under the direction of Gokcen Koray participated in this extraordinary concert. There were also individual performances as well including an anthem played on piano only.

One of the anthems was the work of Kazim Karabekir, who wrote both the poem and composed the music, which starts with ‘’Ya Istiklal Ya Olum – Either Death or Liberty.’’ Musicians with a kanun, ney and ud accompanied the orchestra when Kazim Karabekir’s anthem was performed. Another anthem was by a Turkish student studying music in Vienna who also took part in the competition and had a western influence as some others also did.

Evidently the project was initiated by Don Kiss Kalafat, a Hungarian-born communications coordinator at Tekfen, who heard about the story of the national anthem from Mahmet Altun. A team of researchers went through the archives of the General Staff, the Turkish Radio and Television Corporation (TRT), the Prime Ministry, the Library of the Parliament and the Ministry of Education. After hot debates, all the compositions were sent to an academy in Paris for the selection, which was later abandoned. The national anthem written by Mehmet Akif Ersoy was composed by Turkish musician Zeki Ungor and orchestrated by Armenian maestro Edgar Manas.

There was also an exhibition of photographs of Mehmet Akif Ersoy and others, including Ataturk and Kazim Karabekir in the lobby of the centre. A beautiful book by Mahmet Altun, ‘’Freedom Notes – The Story of the National Anthem’’ was on sale, together with a recent book by Talat S. Halman, ‘’Ataturk Alive in his Own Words’’, both in Turkish and English. I had the concert book signed by Nihat Gokyigit, one of the three founders of Tekfen (2) and now busy creating parks around Istanbul, including the one at the Kozyatagi intersection of Trans European Motorway (TEM.). The park, dedicated to his wife Nezahat Gokyigit, is full of beautiful trees and flowers from around the world and many animals. ‘’It is not finished yet’’ remarked Nihat Bey, as he signed the book for one of my children, adding ‘’It is going to be a beatıful oasis among the crisscrossing highways.’’ It certainly is and everyone is recommended to visit the park which has very easy access and a 24-hour security guard.

2.  The other founding partners of Tekfen are Feyyaz Berker and Necati Akcaglilar. Their motto when they formed Tekfen was, ‘’Perform the work that you know best in the best way you can and be useful to your country.’’ Tekfen Foundation was established in 1992 with the same aim: to be useful to the country. Tekfen Philarmonic is only one of many.  www.1gufte12beste.com,  www.tekfen.com.tr.

3. Another concert celebrating the 85th Anniversary. On Sunday, October 26 a ‘’Republic Chorous’’ put together by the State Theater, Opera and Ballet Workers Foundation without any sponsor, will be performing at the Anitpark next to the Anitkabir, Ataturk Moseleum, in Ankara at 12:00 noon. Up to 3,000 chorous members from every one of the 81 provinces will sing 13 pieces, accompaned by the 60 member Band.