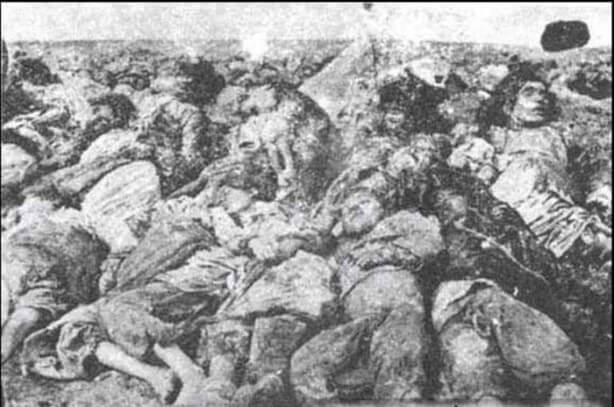 The “In Our Pages” section of the International Herald Tribune (2/10/2009), published a re-print of a news article dated 1909 from Constantinople, “1909 Turkish Exodus” which states:

The non-Mussulmans, who must now serve in the Turkish army, will be enrolled next week. This project has already caused a considerable number of young man to flee to foreign countries. They can secure exemption by a payment of LT50, but as they are not able to do this may have prepared to leave the country. Military service, during which they would be forced to live in the same barrack rooms with Mussulmans, inspires terror among the young Greeks, Armenians and Israelites of good family, for their manners and customs differ totally.

The above is just one example of the behaviour of non-Mussulmans only a year after the declaration of Mesrutiyet (Constitutional Monarchy) in 1908 which gave equal rights to Turks, Armenians, Greeks and Israelites, as the IHT refers to the Jews living in Turkey. However, the Armenians took advantage of the new freedom and purchased loads of guns and ammunition (as mentioned in Mrs Fyfe’se small book on her experience in Turkey as a teacher at the American High School0 and began to act on a project to create a Kingdom of Cyclia in the region around Adana. The events that began in 1909 have been told by different people in different ways, some even going as far as stating that the Ottomans started the fight to exterminate the Armenians, which is a flat lie.

Conferences are being held in many countries and in Turkey throughout 2009 commemorating the 100th anniversary of the tragic Adana events, including a symposium at Turkish Historical Society (TTK) on June 25/26, 2009, which I attended partially. An International Academic Workshop is scheduled for Nov 6-7, 2009 on the 1909 Adana Incidents at Bilgi University, Istanbul. The Istanbul workshop is being organized by Sabanci University, Bogazici University History Department, the Gomidas Institute in London and the International Hrant Dink Foundation in Istanbul.

The official title of the workshop, according to a news release of “Organisation of Istanbul Armenians” is “Adana 1909: History, Memory and Identity from a Hundred Year Perspective” with the aim of the analysis of new approaches to the classic texts by some authors. Those listed in the “Event calendar” of the Organization of Istanbul Armenians include the writings of the following academicians and authors:

However, the following authors who have written about the Adana incidents are not  among those selected by the organizing committee of the workshop;

I am not a historian. I am a civil engineer who has worked on power plants in the United States and many countries, including, Japan, Mexico, Korea and  Turkey. Now I work as a consultant with American and British Energy companies in Turkey, building power plants. I have been interested in the Armenian issue ever since I was introduced to it during the 50th anniversary of the  Armenian genocide at the Riverside Church in NY City quite by chance. Since then I attended many conferences, symposiums and exhibitions, including at Dallas Museum where children were brought by the busloads who were exposed to lies using the fabricated stories presented with photographs, posters and videos. A one-page declaration that I distributed to the visitors on is given below. This is the worst form of anti-Turkish propaganda where hatred is created among children who are never told the other side of the story. Thousands of articles and books are published which are usually one-sided and never mentions the uprisings of the Armenians, including the uprisings in Adana in 1909.

Adana incidents, referred to as Adana Massacres by some authors, is one of many Armenian uprisings across the eastern Anatolia which goes back to 1878. These, some of which took place as open revolts against the local authorities, are well documents which were carried out primarily to bring the attention of the West to their demands from the Ottoman Empire and eventually create a state of their own on lands where they were not the majority. The declaration of Tazminat in 1908 gave the Armenians in the Adana region to accumulated huge arsenals of arms, especially through the efforts of

I submitted an application to attend the Workshop with an abstract which has been acknowledged but my attendance has not been confirmed yet. In case I will be allowed to participate and deliver a paper, I started to work on this and started preparing a draft which I will distribute if anyone cares to comment, contribute as a co-writer with me.

The Nagorno-Karabakh analysis by Sinan OĞAN is published in Hurriyet Daily News – 19...