Allianoi has been in the news during the past several years when it became known that the world’s oldest known ancient thermal city wolud be flooded when the nearby irrigation Yortanli dam would start holding water, now set for mid-February, 2008. A small creek that flows through orchards and under a restored Roman bridge near the site and runs through the diversion tunnel under the dam now, will start filling the reservoir and cover the area.

On Sunday, February 3, 2008, close to 500 concerned citizens and members of organisations working on Allianoi came to the site from Istanbul, Ankara, Izmir and many towns near and far by bus, car and taxi, to attend a rally dubbed as, ‘’Loyalty Journey’’, to save yet another treasure of Anatolia. The rally was organized by Atlas magazine, Doga Associationa nd Doga Tourism. The photograph taken by Ahmet Cicek of Yeni Asir shows the concerned individuals including a lady who told the story of Allianoi with tears, asking that the site be saved (Photo1.)

Allianoi and Asklepion, the God of Health

Throughout history, Allianoi has been known as the ‘’native land of the God of health’’, Asklepion, and has been a thermal centre of the ancient city of Bergama (Pergamon), 18 km northeast of Bergama. It was permanently inhabited throughout the Hellenistic, Roman, Byzantine and Ottoman periods. Excavations were started in 1998. In 2005, an original Aphrodite statue was discovered in one of the rooms which is being displayed at the Bergama Museum (Photo 2). The entire area was covered and the area was farmed without knowing the existence of buried treasures for years until the first discovery was made in the 1990s.

20 % of the area and includes a church, two chapels, two fountains, streets, the remains of another bridge, and a spa facility where hot spring still functions. 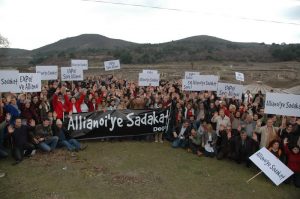 The excavations have been carried out under Dr. Ahmet Yasar from Trakya University, which has been halted due to lack of funds, who attended the rally and stated that over 11,000 objects have been discovered to date and presented to the Bergama Museum.

Proposed Solutions to Save Allianoi

In 2002, several alternate schemes were proposed to save Allianoi and sent to the Ministry of Culture and the State Hydraulics Works (DSI), while allowing the reservoir to be filled to serve the needs of the local farmers. One of the alternatives proposed was underwater cameras to show the visitors the relics of the spa and the town. None of the solutions were accepted, mainly due to high cost, and the efforts of many civic organisations and concerned individuals have not been succesful. Three commissions formed in 2005, 2006 and 2997 carried out academic studies but none of these and the efforts of the Allianoi Initiative made a difference in the decision of DSI to proceed with filling the reservoir. There is also another irrigation dam nearby, which will also begin impounding soon.

The planning of the irrigation dams goes back to the early 60s. The location was determined by DSI in 1970 and the project was finalized in 1995, with tenders issued in 1993. The dams have been under planning and construction stages for over 40 years, and only recently completed.

Villagers near the area who grow vegetables and crop for their livelihood favour the dams, including The Chamber of Agriculture of Bergama. In fact, there were several representatives from the supporters of the irrigations dams at Sunday’s rally,

Izmir is a candidate for the 2015 Expose whose theme is health. The associations and individuals working on to save the Allianoi project are hoping that Izmir will be chosen as the Expo 2015 site and the organisers will include Allianoi in their program and finance the construction of a wall around the site that will save the ancient health centre for the benefit oýf expo goers and Turkey.

A book of letters written by students, teachers and others, has been published to provide awareness of Allianoi and also funds for the association organized to save Allianoi (www.allianoi.org). The book includes letters and poems written by students, teachers and others and photographs. It is available from ‘’anabasis’’ publishing (www.anabasis.com.tr).

Every effort should be made to save Allianoi.

Additional information can also be obtained from www.dogaturkiye.com.