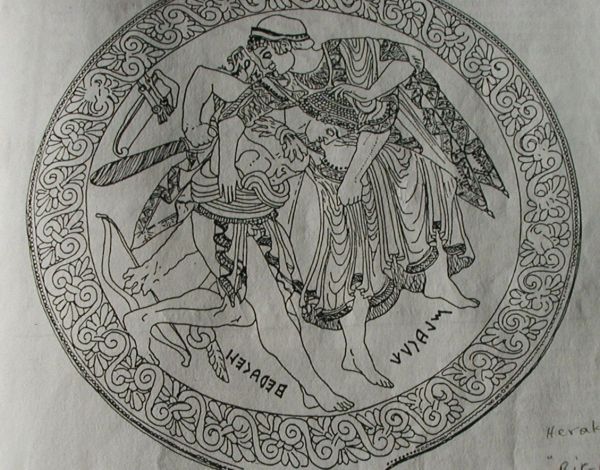 Below is an Etruscan Mirror:  From a book by Giuseppe Foscarini, “La Lingua degli Etruschi”, Item 11, p. 31.

This mirror has two Etruscan inscriptions as names of a man and a woman as shown above. I first trancribe and describe the man’s name by reading the name from right-to- left as:

a)  “OKEL-oQUN” which identifies the man with the Turkish name “OKIL-oQUyaN” meaning “he who studies in school”.  In the Etruscan text, the first letter is shown as an “arrow” which has the name “OK” in Turkish. Therefore, I trancribed it as “OK”.
b)    Additionally, it could be transcribed as “aKEL-oQUN” which identifies the man with the Turkish “AKIL-oQUyaN” meaning “he who studies logic and knowledge in school”.
From the picture, we see that he is a “BALD” man with a lion’s fur on his sholder. This identifies him as the Etruscan “HERAKLI”, that is, Turkish “ER AKLI” as I discussed in describing the previous Etruscan mirror. Thus, the man in the picture is a mythological personification of the knowledge that people learn by attending schools or through their self enlightened thoughts.

The Etruscan “HERAKLI”, Latin “HERCULES” and Greek “HERAKLEUS” are all from Turkish words “ER AKLI” and “US”.

It is interesting to note here that in western mythology, Hercules is described as son of JUPITER and ALCMENA.  The word JUPITER, the name of the father of Hercules, rearranged as “ER-TP-UIJ”, we find that it is the Turkish expression “ER-TePe ÖYİ” meaning “the head house of man”. Thus, the so-called Roman name JUPITER is just a name fabricated by altering and restructuring the Turkish expression “ER TEPE ÖYİ” and mythologically personifies the “human head” as “god”. So, the source text for this Romanized name is a restructured Turkish expression. Similarly, the mother’s name ALCMENA can be deciphered in three ways:

1)   “MAN-ACEL” which is Turkish expression “MEN AKIL” meaning “I am mind, I am wisdom, I am knowledge”.

Thus, in all of these cases the Romanized name ALCMENA, the name of the mother of HERCULES, is another name fabricated from Turkish and it personifies again the human mind, intelligence, understanding, thought and other attributes of the human head. Then, again reference is to the “Human Head”, that is, ER TEPESİ in Turkish which I have been mentioning in many of my comments.

HERCULES being the personification of human knowledge, it is natural that his mythological father and mother be the human head!  But we must note and admit the fact that the source for all of these is the Turkish language and ancient Turkish civilization!

In the Etruscan mirror below, I transcribe the name for the woman as follows:

a)   The name is given as “MVNOVK” where the symbol shown as O with a central dot in it is an ancient SUN symbol and the EYE symbol.  Curiously, the English word EYE is voiced as Turkish AY the Moon which is also a round disc in the sky as a full moon and it is also regarded as an EYE that appears as looking down on earth during the nights. So, this Etruscan symbol is a representation of the Sun and the Moon and the human “eye” that enables us to see. With this background information, I identify this Etruscan Sky-God symbol as having the value of TUR, UTU, UT, TU or T as needed in reading Etruscan words. TUR and its shortened form of TU and its other variations are also a Turkish suffix used in definitions of concepts. With this definition, the Etruscan word “MVNOVK” can be reas as “MUNTUK” which identifies with the Turkish word MANTUK (MANTIK) meaning “logic, rationality”. With this reading, the woman dancing with the man named “OKIL OKUYAN” (AKIL OKUYAN) is actually a mythological personification of “human logic and rationality” which is the fundamental foundation of human knowledge!  Without logic and rationality, knowledge would be false and without solid foundation.

b)   If the Etruscan word given as MVNOVK is read as “MUNTURUKa”, it identifies with the Turkish expression “eR-MANTUKU” meaning “man’s logic”, “man’s rationality”.

With these readings, in my view, the woman in this Etruscan mirror personifies “the human LOGIC” which again is the companion of human knowledge.

With these readings and understanding, the message portrayed in this Etruscan mirror is another portrayal of the of the same HERAKLEI concept that previous mirror Etruscan mirror (given as Item No.12 by Giuseppe Foscarini in his book) portrayed.

After these explanations, I would like to turn back to the name of the bald-man in the Etruscan mirror below. I read and transcribed his as “OKEL-oQUN” which also identifies the man with the Turkish name “O-KEL-oQLaN” (O KEL OĞLAN) meaning “he is the Bald Boy”. “KEL OĞLAN and His Mother” are Turkish folklaric charakters.  To find them on this Etruscan mirror is another evidence that the Etruscans were ancient Turkish people having culture that was same as that of the present Tur/Turk/Oguz peoples.

From his representation on this mirror, we can see that he has also been shown as a “bald man” or “Bald Boy”.

So we see that this ancient Turanian mythological charakter has lived in the Eteuscan folklore and to this day in the Turkish folklore.  This of cource links the Etruscans and Turks as etnically, linguistically and culturally with the Turks of today and also with the ancient Turanian Tur/Turk/Oguz peoples!
***
In closing this writing, I would like to bring to the attention of the reader a modern comic boy character that have been shown over the TV networks to the world children. This “bold boy” is known by the French word “CAILLOU” and the word is pronounced as “KAYU”. A picture of him can be found at the following link on internet. http://th178.photobucket.com/albums/w266/duhitsm3/th_caillou.jpg<>  <>The

This French word “CAILLOU” is very revealing.  First, in the context of pebble, stone and boulder, and the fact that it is pronounced as KAYU, the word CAILLOU identifies with the Turkish word KAYA (or KAYA O) meaning “rock, boulder, stone” or “it is rock, it is bolder, it is stone”.  Thus, this French word is an altered, restructured and Frenchized form of the Turkish word KAYA.

Furthermore, when the French word CAILLOUX is rearranged as “CIL-OXLA-U”, we find that the word CAILLOUX is also an altered, restructured and Frenchized form of the Turkish word “KEL OKLAN O” meaning “he is Bald-Boy”. That is why the French word CAILLOU also means “bold-head”.  Thus, even in this case, a Turkish expression is altered, restructured and Aryanized deceptively to make a “French” word.  A picture of him can be found at the following link on internet.

Thus, we find the historical Turkish character “KEL OĞLAN” not only in the ancient Etruscan culture, but also in the French dictionary!

When the Greek word PHALAKROS is rearranged as “KAL-(K)APHO-RS” or “(K)AL-KAPHO-RS”, we find that the word PHALAKROS is also an altered, restructured and Hellenized form of the Turkish word “KEL KAFA eRiZ” meaning “we are bald-headed men”. Thus, again a Turkish expression has been altered, restructured and Aryanized very deceptively to make a “Greek” word and sell it to the world as “Greek”!

And similarly, when the Greek word PHALAKROTES is rearranged as “KEL-(K)APHATOR-S” or “(K)EL-KAPHATOR-S”, we find that the word PHALAKROTES meaning “baldness” is also an altered, restructured and Hellenized form of the Turkish word “KEL KAFATUR” meaning “it is bald-head”. Thus, again a Turkish expression has been altered, restructured and Aryanized very deceptively to make another “Greek” word.  Turkish word KEL means “bald”, KAFA means “head”, KAFATUR means “it is bald”.

In concluding, we can say with confidence that all of these readings and decipherments show and prove without question that Turkish language and the ancient Turanian civilization was the source on which so-called “Indo-European” and “Semitic” languages and civilizations have been based!

1909 Adana Rebellions and the Massacres of Armenians and Moslems ...