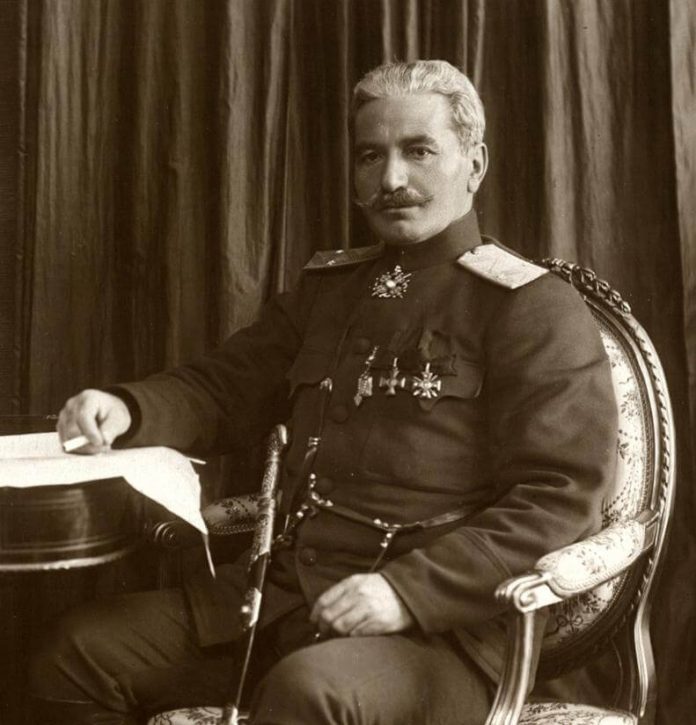 The first time I learned about ‘’Antranik of Armenia’’ was in a story written by William Saroyan with the same title back in 1935 (1). William Saroyan, the Pulitzer price winner and one of my favourite authors, was born in Fresno, California whose grandparents had immigrated to the area from Bitlis, Turkey in 1905 (which he visited in 1965)). In his story of Antranik of Armenia, Saroyan does not present a favourable picture of Antranik after meeting him following Antranik’s settlement in California, and states in his story that ‘’The enemy of the Armenians were not the Turks, but the Russians.’’ Saroyan also sates that, ‘’in 1915, General Antranik was part of the cause of the trouble in the world but it wasn’t his fault. There was no other way out for him and he was doing what he had to do.’’ But, Antranik Celebyan does not make any reference to William Saroyan’s story on Antranik, the terrorist who bragged about how many Moslems he had killed..

Antranik was famous for his collaborations with the Russians and killing of Turks after the Armenian organizations chose the Bulgarian method to gain their independence, meaning practising terrorism and from time to time, organizing open revolts where Moslems would be massacred. Several Turkish publications on Antranik quotes that Antranik was a rebel leader, not a Pasa, and that he would love to brag about ‘’how many Moslems he had killed in one day.’’

Therefore I was very interested in finding out about, first what the Armenians thought about Antranik and, second, why they never refer to anything written by William Saroyan, including Peter Balakian, in his one-sided book ‘’The Burning Tigris’’. The first is a very long story, which I will try to summarize below, but the answer to the second one is very simple, which the book gives us quite innocently.

On page 336, this is what Celebiyan quotes from Sarayon: ‘’Soviet Armenia is our sun, stone, ocean, history, and our unity. Russian support is a great chance for us. We can not survive without the support of strong power. That strong power is the Soviets. It is the Soviets that give the freedom to the Armenians, help us to breathe and to show our strength and riches. The Russians are our brothers and friends. For 50 years we have been enjoying the fruit of this friendship. We are alive, healthy and happy because we have a Soviet Armenia. There are no obstacles for us. Because the Soviets are behind us’’.

And yet, when William Saroyan sees what the Russians are up to, he does not hesitate to call them the ‘’real enemy of the Armenians’’, as he elaborates in his story, ‘’Antranik of Armenia’’. When the Turks lost the Turco-Russian war in the east and the Russians were nearing Istanbul on the west, the Armenians were jubulious. Even the Armenian Patriarch started working with the Russians. However, as the invading Russian armies left the Ottoman lands after the 1917 Russian revolution, the Armenians took over and started mass killings which are being unearthed even today. The Armenians tried to establish a greater Armenia including the lands from the eastern Anatolia which the book constantly refers to as the ‘’Western Armenia’’. But William Saroyan knew the reality and never supported the backstabbing of the Turks by the Armenians.

The book is over 400 pages and has close to 80 pages of photographs, ‘’From Antranik’s Album’’, a note states. There is also a long list of references but does not include any books by William Sarayon or authors that tell the other side of the story. Almost exclusively, only Armenian writers are identified. There are extensive notes at the end of each chapter which again do not make any reference to books that refute the claims presented in the book. The lack of an index is a shortcoming of the book.

The book presents the life of Antranik and also Armenian revolutionary activities during three periods, first 1850- 1914, second, 1914 – 1919, and the third, 1920 – 1927. Antranik was born in 1865, in Sebinkarahisar, a town in the northeastern part of Turkey, not too far from Erzincan. I visited Sebinkarahisar after reading a beautiful article by the granddaughter of an Armenian, also born in the same town, who was afraid to go to Turkey, but following her three week journey to Turkey, she found the truth in her own way, stating at the end of her story that it was not the fault of the Turks or the Armenians on what happened in those years, but the fault of  humanity.

Celebyan’s theme is on the ‘’Armenian Revolutionary Movement’’ with the purpose of creating a greater Armenia from the lands of Soviet Armenia and the lands in eastern Anatolia where Armenians were never the majority. Even in Bitlis, a province where the largest number of Armenians lived, Turks and Kurds were two-thirds of the population. The author throughout the book refers to these lands as the ‘’Western Armenia’’ and the population as ‘’Turks and the Kurds’’. Ignoring the fact that Sultan Mehmet moved the Armenian Patriarch to Istanbul in 1466 and for centuries, the Armenians and Turks lived together in peace, the author states that the Armenians were massacred long before Abdulhamit and 1915 and claims that the Armenian population at the beginning of 10th century was over 6 million.

There is very little coverage of the relocation of the Armenians in 1915 in the book and on p. 320, the author states that close to one million Armenians survived the relocations. On p. 343, the author also states that 150-200 thousand Armenians remained in Syria. Thousand returned to the Ottoman lands and joined the Russian forces in the war against the Empire. On the Turkish deaths, the author gives a figure of 1.5 million Turkish civilians and 221,824 military personnel, an exact figure that makes one wonder.

The book gives in detail the creation of secret organizations, such as ‘’Freedom Party’’ in Van in 1872 to liberate Van, the Hinchak part established in 1887 in Geneva, and Tasnak party created in 1990. However, in many instances, the book tells the story of differences between Antranik and the parties and even describes a plot against Antranik by the Armenians in Tiflis.  The author also makes reference to some of American Missionary Dr. Clarence Usher’s observations (p. 242), how Antranik takes off his Generals uniform (does not state how he became a general though) and how Antranik goes up to the mountains to fight as a freedom fighter. But on p. 248 makes a confession that the Armenians put the entire city of Kars on fire as they leave the city on April 12, 1918.

The book presents victories supposedly won by Antranik, one after another, which is not mentioned in any other book that I have read. He is made a hero who fights with a small Armenian force against large Ottoman armies and wins and hides in the mountains. Many monasteries become the scene of fighting including a victory that Antranik supposes to have won at the Arakelots Monastery. On page 97, the author makes reference to the Missionary activities carried out by the Protection and Catholic Missionaries, who are distributing free Bible to people with are 80% illiterate, unaware of the atrocities committed against the Armenians.

This is yet another book that twists the history as the author feels and many Turkish Armenians will read this book and be faced with the story of a man who the Turks label as a murderer and yet the Armenian author even gives him the title of ‘’Pasa’’ which is only earned by going to military schools, not by killing innocent people, as Antranik did.
Interestingly, the original name of the book in Turkish ‘’ Komutan Antranik ve Ermeni Devrimci Hareketi’’ has been changed to ”Antranik Pasa” by the author Antranik Celebyan, who states in the Preface that he became interested after witnessing a total lack of recognition of the Armenian Genocide in 1965 when many conferences were held (one of these was at the Riverside Church in New York City on April 24, 2965, attended by this writer also). Antranik celebyan states that he was a Psychology student at the Beirut American University at the time. One day he discovers diaries that he claims were written by Antranik and becomes interested in the life of Antranik and writes the book in the United States after his immigration following years spent in Europe.

Antranik dies in California in 1927 and buried at a cemetery in Fresno, California, called ‘’Ararat’’. His friends want to bury him in Armenia and take him on a long journey to Armenia. The book claims that the Russian Government did not give permission for the burial of Antranik in his country and therefore they bury him at ‘’Per La Sez’’ cemetery in Paris.

The book was advertised in the AGOS newspaper, which I purchased when went to visit the Publisher of AGOS, Mr. Hrant Dink, in connection with some articles in Agos. They told me that Hrant Dink was at a meeting and that they would call me back for an appointment. That was almost a month ago.. They never did.

About the name of the Etruscan King LUCIUS TARQUINIUS PRISCUS by Dr. Polat...