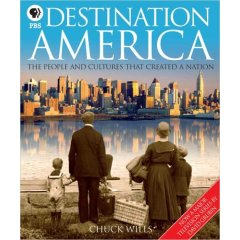 This is an excellent book with some omissions and deficiencies on the story of immigration to America in terms of the Four Freedoms expressed in an illustration by the famous American painter Norman Rockwell: “Freedom to Worship, Freedom from Oppression, Freedom From Want, and Freedom from Fear”, to which a 5th dimension has been added, “Freedom to Create.” With more than 500 photos and artworks, Destination America is a very informative, entertaining and comprehensive “family portrait” of the United States, where I have lived, on and off, for 50 years.

Following the introduction, the first section, Settling in America, tells the story of the First Americans and the settlement of America from the 1500s to the 1800s by the Spanish, the French, the English, the Dutch and Swedish settlers with stories of the Native Americans and the enslaved Africans. It is a moving chronicle that leads to the Thirteen Colonies, the Revolutionary War and closing the “Golden Door.”

The next four sections tell the story of immigrants from every corner of the world, including the Armenians under “Freedom from Fear.” However, there are very few references to Turks or Turkish immigrants who started coming to America during the late 19th century and the early 20th century, which probably numbers around 300,000 today.

Early comers were largely Ottoman citizens with different ethnic backgrounds and a few thousand Turks who first showed up, including those during the famous Chicago Worlds fair in 1890s, did not stay to become citizens. Most who came from the Ottoman lands are mentioned under “Muslims” (page 94) where immigration from the Islamic world is described as a fairly recent phenomenon in the United States, but with major cultural impact, perhaps numbering over 7 million.

The reason was given for the immigration from Syria and Lebanon, then parts of the Ottoman Empire, is young men seeking to avoid conscription into the Turkish Army.
The Armenians have been given special treatment with 2 pages presenting a brief history followed by what is referred to as “The Horrors of 1915”, without mentioning the many Armenian uprisings in eastern Anatolia, some of which were probably organized by Armenians already settled in the United States long before the conflict started.

The article begins with the following statement: “Many historians consider the fate of the Armenians during World war I to be the first European genocide of the 20th century. While the Turkish persecution of the Armenians remains controversial it led to an influx of up to 100,000 Armenians to America. Today, about half of the nation’s million or so Armenian-Americans live in California.”

The last section “Freedom to Create” includes Eli Kazan under “Theater”, referring to him as a Greek-American born in Turkey.

The short biography of Kazan states that he won fame directing plays by Arthur Miller (such as The Death of a Salesman) and Tennessee Williams and acclaimed films such as “On the Waterfront”, but Kazan’s reputation among some of his peers was tarnished because he named names to the House Committee on Un-American activities during its hearing on communism in Hollywood in the early 1950s, which did not prevent him from receiving an Honorary Oscar for Lifetime achievement in 1999. He also wrote many books, including “The Anatolian”, his life story.

But the book does not mention Ahmet Ertegun, the legendary “Music man” who made many musicians famous, including Ray Charles, and died last year and was buried in Uskudar, Istanbul.

In March 2006, PBS  aired a documentary on the Armenian genocide, but refused the showing of another documentary, “The Armenian Revolt”, which would expose the one-sided treatment of the Armenian issue in “Destination America.” PBS, supposedly created for the good of the public, is doing a disservice to the Turkish-Americans and the general public by disseminating false information, the way the Armenian issue is presented in this book is an example. What a shame.

The book also has a wealth of information on immigration and references to websites, such as http://www.ellisisland.com and http://www.cis.org/.

I purchased the book in Boston during a walk on the “Freedom Trail” after seeing it displayed in front of the Borders bookstore across from the “Irish Famine” monument at the corner of Washington and School Street. The book needs a major revision on the often neglected settlers in this wonderful land, the Turkish-Americans.

As mentioned to you during our brief conversation, Channel 13 would be making a colossal mistake if it does not allow the showing of “Armenian revolt” or the “Debate” following the airing of “Armenian genocide” documentary, which must be full of misinformation, falsified events and only the Armenian viewpoint on the tragic events that were started by the Armenians during the World war I. The showing of the “Armenian genocide” documentary will tarnish the image of Channel 13 and all of PBS affiliate stations forever in the eyes of those who know the truth and have been trying very hard to let the PBS know this through letters, telephone calls and personal visits, which will tarnish the image of Turkey and the Turks around the world.

Two nights ago, I watched Channel 13 pledge program, which was excellent, especially the folk songs of the sixties and the seventies. On another channel’ on the state of television of today’ someone made a comment that “As long as it makes money, it does not matter what you put up in the air” which I am afraid applies to the actions of some of the irresponsible PBS administrators who have decided to air “Armenian genocide.”

I have been watching PBS steadily for almost 44 years since its founding in 1962 when Edward R Murrow introduced the station stating that its mission would be “educational”, presenting different points of views, which was also the case with other TV channels in those days. Since I had come to the United States to pursue my education, watching educational programs was very important and helpful. But what we are now being offered with programs such as the showing of “Armenian genocide” is nothing but “Armenian propaganda” with Armenian point of view only and total disregard of opposing views, which should be open for public debate.

During the membership drive program, last night’ Tom Smother” of the “Smother Brothers” and everyone in the studio sang the song, “This land is My land, This Land is Your Land, From California to the New York island”. I am afraid, judging from my 50 years among Americans, some Armenians have hijacked the American people with no room for Turks through their insults and lies to be a part of this great nation. Only two weeks ago, the performance by a Turkish singer in California was cancelled through the efforts of some Armenians, which is a pity. But times are changing and with the growing awareness and increased participation of the second and third generation Turkish-Americans, who simply call themselves Americans with Turkish heritage in contrast to Armenians who are determined to stay Armenian forever, there is an ongoing movement that challenges the anti-Turkish propaganda and tells the truth to Americans.

As a Turkish-American who has lived in this country for 50 years with all the benefits of being a good citizen and a proud American, I urge PBS to reconsider its decision to air “Armenian genocide” and to allow the showing of “Armenian revolt” and the “debate” for a fair and balanced view of the tragedy. Perhaps only then some of your ill-informed program directors can realize the vital role that PBS plays in educating the American people for peace among all people that make up the United States of America.