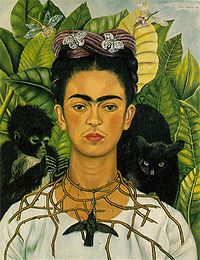 The Pera Museum in Istanbul hosted a selection of paintings and drawings by two of the most influential artists from Mexico, Frida Kahlo and Diego Rivera. The reception held at the museum on December 22, 2010, Wednesday evening was attended by many from Istanbul’s elite, including the Mexican Ambassador to Turkey, Honorary Consul General Varol Ziya Dereli and Ara Guler, the most famous photographer in Turkey. An exhibition of Ara Guler’s own photographs is currently at the French High School,  Notre Dame de Sion Fransiz Lisesi,  (1). There is also a 40-minute video on the life of Frida Kahlo, told by 11 individuals, made by Karin and David Crommie, shown in San Francisco in 1966.

The Pera exhibition is the first time a major selection of works by the couple are shown, including photographs of Frida Kahlo and Diego Rivera, taken by American photographer Nicholas Murray with whom Frida had a 10 year relationship.

Frida Kahlo was born on 6 July 2007,  but later she changed the day to 7 July to coincide with the beginning of the Mexican revolution. Her father was a Hungarian Jew photographer, Wilhelm Kahlo, and mother an Indian (Kizilderili) Mathilda Calderon Gonzales. Both had extraordinary personalities and their marriage was turbulent. Frida suffered health problems all her life which began when she was struck with polio at the age of 6 and spent most of her childhood in bed, walking only when she was 20. She started to paint and when she went to see Diego Rivera show her paintings, she fell in love with him and married in 1929. Both had a relationship including Frida’s with Russian revolutionary Leon Trocki who came to Mexico after his three-year stay in Istanbul. Frida died on 13 July 1954 at the age of 51.

The house where Frida lived, known as the “Blue House” is a museum in Mexico city and the impressive “Diego Rivera Museum” is located in the Chapultepec Park. The works exhibited are all from the Jacques and Natasha Gelman collection (40), including  Natasha Gelman’s two portraits drawn by Frida and Diego, exhibited side by side.  The exhibition has been curated by Helga Prignitz-Poda, who was also responsible for the Frida Kahlo exhibition in Berlin and Vienna this year.

Notes. (1) An exhibition of photographs of Ara Guler together with passages from poems and writings of French poets and writers, called “Eller ve Yuzler – mains et visages” is currently being shown at the Notre Dame de Sion Fransiz Lisesi, through 20 January 2011

Revealing the secret make up of the Latinized terms “PROKARYOTIC” and “EUKARYOTIC” – and...