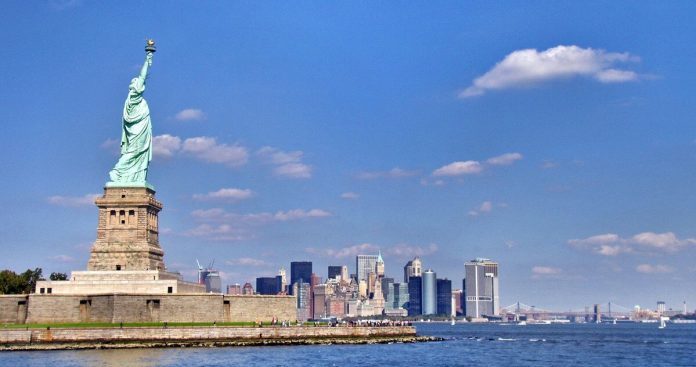 The Statue of Liberty is a majestic sculpture that towers above Liberty Island at the entrance to New York Harbor. This figure of a woman draped in a loose robe holding a glowing torch in her uplifted right hand is renowned throughout the world. It is a symbol of the United States and a beacon of freedom to people throughout the world. The Statue is a monumental feat of sculpture, engineering and architecture, which this year celebrates its 125th anniversary.

The purpose of this article is to correct an inaccuracy in the history of the Statue and put it in a true historical perspective. Common knowledge tells us that this Statue was a gift by the people of France to the United States on the occasion of the 100th anniversary of the founding of this country. In fact, the Statue did not belong to France; it was originally intended for a different locale – the City of Port Said of Egypt on the Mediterranean Sea, at that time a Turkish soil. The Statue, “The Light of Asia” was ordered in the name of the Turkish sultan Abdul Aziz (1861-1876) to celebrate the inauguration of the Suez Canal, and the money was paid from the Turkish Treasury. The entrance of the Canal was to be crowned with a statue depicting a woman towering above the harbour. She was to be draped in a graceful loose robe, wearing a crown with seven spikes on her head to represent the Ottoman Sultan whose title was the “King of Seven Seas.”

The order for this Statue was placed with Frederick Auguste Bartholdi, the foremost sculptor in France. A socialite, Isabelle Eugenie Boyer (widow of the Singer sewing machines inventor Isaac Singer) posed as a model for the Statue. Bartholdi completed the copper and steel frame of the Statue in Paris, working together with Gustave Eiffel, another technical genius.

When the Statue was completed, Egypt had won its independence from the Ottomans; the new Egyptian ruler, Hidiv Ismail, objected to the Statue on two grounds; first, an imposing structure rose from the bosom of the sea could have impressed people, and it could become a subject of idolatry, a mortal sin in Islam. Second, as the Statue represented a woman this might cause disturbances in a Muslim country. Under the circumstances, the enterprise was suspended, and the Statue was put in storage in France until a suitable location could be found. At that time, the Ottoman Empire was in turmoil; beleaguered with endless wars and internal problems, and the Turks had forgotten that they had paid for and owned the Statue.

Historically, from the time of Marquis de la Fayette, there existed a strong friendship between the United States and France. An organization called “The French-American Friendship Society” was founded to promote this friendship even further. Mr Edouard Laboulaye, a politician and a legal scholar was its president. Aware of the existence of the Statue, he envisioned it as a monument to the U.S. independence as well as to the ideal of liberty shared by both people. At that time the United States was on the rise with a whirlwind dynamism. On January 1, 1863, the 13th Amendment abolished slavery.

At Gettysburg, in July 1863 the Confederate cause ended. Finally, in 1864, the Civil War came to an end. America, united and democratic, emerged as a highly respected, progressive country. As a token of the enduring friendship between the two countries, Laboulaye wanted to make a gesture to the United States. And what could be more fitting than to make use of the Statue that lay idle in storage for years?  By making a gift that belonged to a third party the French put themselves in an awkward position. As for the Americans, giving them the benefit of doubt, they were perhaps unaware of the intricate history of the Statue. Besides, as a recipient of the favour, they might have considered it inappropriate to question the provenance of the gift.

The occasion of the gift was to be the 100th anniversary of the founding of the United States. Laboulaye convinced the French government to support his idea, and the work of refurbishing and completing the Statue was assigned to Frederick Bartholdi, the creator of the Statue. Upon completion, he disassembled the Statue into 350 pieces packed in 214 wooden crates and shipped them to the United States for re-assembly in New York. The French freighter “ISERE” carried the pieces across the Atlantic Ocean. She arrived in New York on June 17, 1885, carrying a “symbolic” 100th-anniversary gift (as the 100th anniversary had already passed). The American architect Richard Morris Hunt was selected to design the pedestal. To have the Statue made it the 110th anniversary (in 1886) a hectic schedule was applied. The erection of Lady Liberty in New York Harbor took four months. As was originally intended a tablet is cradled in her left hand. The dedication ceremony took place on October 28, 1886, and it was inaugurated by Bartholdi himself.

France and the United States raised funds for this project; but those funds had nothing to do with the Statue per se; they covered the construction of the foundation and the pedestal, the refurbishing work, shipping and handling, erection, additional engineering and the architectural expenses as well as making changes to the face; Bartholdi made an alteration by putting his mother Charline’s face on it.

The French conveniently got credit on the Turks without even a token reference to the Turkish generosity. By right, the Statue itself which is an enduring symbol of freedom, opportunity and hope can actually be considered a gift from the Turkish people.

About The Ancient Sardinian NURAGHES and Their Possible Multifunctional Use (Part-3)...