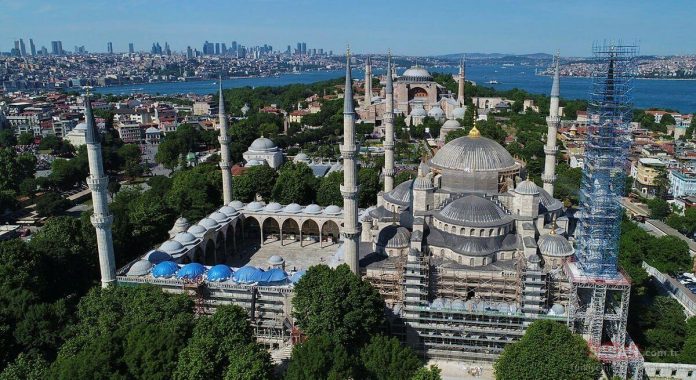 In Islam, there is a custom called Kandil ( Feast in English). These are periodic religious observances commemorating an event, or honouring a Deity, a person or a thing. In Islam there are four special events “Kandil” that are observed; they are Mevlud, the celebration of the Birth of Muhammed, Regaib that glorifies His Conception, Mirac that praises His Ascension to Heaven, and Berat that observes His Investiture with Prophet-hood. In those occasions the devout are reminded of their pious obligations towards Providence as well as their social obligations to fellow human beings; they are enjoined to reflect and pray, to concentrate on their inner world, and to become more mindful of their relationship with God.

To make those occasions cheerful the bakeries make special bagel-type rolls, and the mosques are lighted up. The devout are encouraged to read and chant Qur’an. Families, friends and relatives pay a visit to each other. In 1616, when Sultan Ahmed Mosque (Blue Mosque) was completed during its dedication ceremony the Ottoman sultan Ahmed I (1603-1617) began a custom first time ever of stringing oil lamps (Kandil) high in the air among the six minarets. This special illumination is called “Mahya”. The above four special events took their common name, Kandil, as a reference to those illuminations. Nowadays, however, the oil lamps have been replaced by electric bulbs.

Those Mahyas occasionally spell out greetings and goodwill messages which could be seen at nights from everywhere. These illuminations are made during Ramadan also. The most popular message is “HOS GELDIN YA RAMAZAN-I SERIF” (Welcome, O sacred  Ramadan). Those lights are lit on the first day of Ramadan, and they remain on throughout the month of celebration and also during the Feast of Ramadan, the three-day observance marking the end of the fasting.

Lately, those Kandil celebrations have come under scrutiny. The contemporary scholarship claims that they did not exist during the time of Muhammed because there was no such notion. In fact, there is no reference in the Holy Qur’an to those days. Even during the period of the four Khalifs who ruled after Muhammed, no such custom was practised. They are later inventions and accretions to Islam by the clergy. Furthermore, modern scholars dispute the occasions that gave rise to those celebrations. For instance, they say in an ever-changing lunar calendar system how reliable is the date of birth of Muhammed, let alone his Conception? How so intimate an event could have been chronicled, and 1500 years ago at that? Besides, how significant is this, and what is its relevance to His holiness? Also, there are question marks about the Mirac Kandil which celebrates His Ascension to Heaven. The legend has it that He mounted a charger called “Burak”, journeyed to seventh Heaven and met with God. He travelled from Mekka to Jerusalem – on a camel back – and returned on the same night. The distance covered is about 1000 miles, not to mention His journey to Heaven. The modern scholars say these are parables, and today people regard them just fairy tales. Therefore, all the Kandil literature which we see in print these days are mythical lore, not authentic.

Furthermore, the modern Islamic scholars assert that these observances were contrived by the ulema close to the sultans to attract people to the mosques and to establish control over the populace. The underlying purpose is political; religion is but a sugar coating. They assert, “The mosques are Temples to assemble people and a showcase to flaunt the power of the sultans. In that setting, the collective subconscious is imbued with the supremacy and the might of the state. Kandils are benign occasions for this goal as during the Kandils, people congregate in the serene atmosphere of the mosques in unruffled quietude, mentally and physically ready for initiation into submission and obedience. This is a smooth rite of passage into indoctrination and resignation. So, it all boils down to controlling the masses.”

The process follows psychological steps; it starts with imposing on the congregation the submission to God to which no one can raise an objection, once people are inspired with submission, then the allegiance to the ruler is hammered home. The believers, under the imposing structure of the mosques, feel humble and diminished. A man in strange garb, Imam or Hodja, apparently an authoritative figure, babbles something that the audience could not understand, yet everybody in pious reverence listens to him submissively. The message that comes across in all this exercise is “Obey the God, and obey His shadow on the earth.”

We are living in an age of query. With the onset of the internet age, everything is debated and probed, and logical answers are sought. Islam, so far, has remained immune from this brutal dissecting process. Yet, lately, some fertile minds (shall we call them “iconoclasts!”) courageously search explanations to age-old taboos in Islam within the framework of reason.