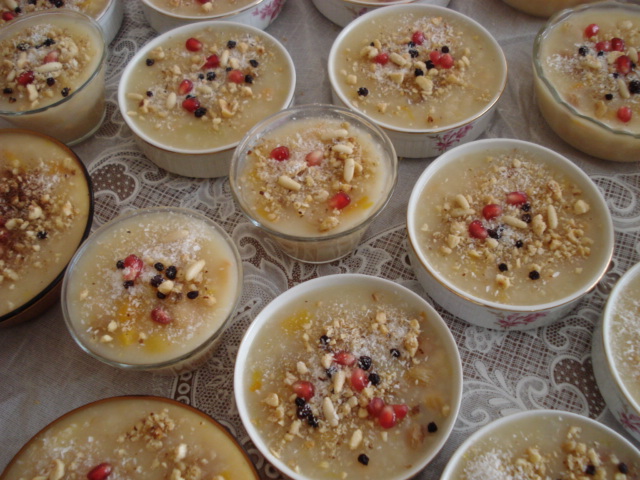 Ashure is an authentic and unique dessert widely known in the Middle East and made by the Christians, Jews and the Muslims alike. It is also called “Noah’s Pudding” a reference to the legend of Noah’s Ark. Traditionally; it is made on the 10th of the Islamic month of Muharrem. In Arabic “Ashar” means Tithe, the tenth part of something; so it may have acquired its name from this connection.

Noah’s miraculous journey on a boat is a shared belief by the three monotheistic religions. Legend has it that thousands of years ago societies showed sign of corruption.  Persistent problems of violence, injustice, oppression, crime, immorality vexed and exasperated people. Prophet Noah, a wise man, with an unwavering belief to one God, urged his people to amend their evil and wicked ways. Yet, people refused to listen to his injunctions, even made fun of him, and scoffed at him.

According to Legend, God sent signs to Noah that a flood was imminent, and that he should build a vessel to save those who believed in him along with a pair of each animal species for procreation. Noah and his people worked hard to finish the boat, and all the time he tried hard to reason with the people about the approaching flood; yet they still refused to listen, and even cast derisions on him. When his vessel was ready, the supplies were loaded, and the believers and the animals boarded the boat. Traditions tell us, and then God said, “Oh, sky! Let your water pour down!” and then He ordered the earth,”Oh earth!…Hold your water!” The water began to rise all over. While those left behind perished, a long and tumultuous journey started for Noah and his company. The boat was left to the whims of the churning water. Days passed and food became scarce, and starvation seemed impending. There was not enough food left to make a decent meal. Noah collected whatever edible left around the boat, and mixed them together in a big cauldron. Famine was averted, and everybody in the boat survived. And Ashure was born. According to Legend this journey lasted for forty days, and the very next day the flood receded. Historians believe that the Noah’s Ark came to a rest at the top of Mount Agari in Eastern Turkey. This special dish that Noah is believed to have improvised serves us as a reminder of the God’s mercy over mankind through Noah.

Ashure symbolizes sharing and caring and deep communal identity. It also symbolizes synergy where the total effect is greater than the sum of individual effects. In this dish, very different ingredients come together in one pot and create a harmonious whole. While the wheat, white beans, hazelnuts, figs, chickpeas, raisin, almond, apricot, sugar, walnut, cinnamon, pomegranate, sesame, chestnut, pine nuts, grains, blackberry, raspberry, strawberry and others preserve their own unique character in the process they also enhance each other’s taste. Ashure is not a “melting pot”; rather it is a living example of how diversity can heighten the quality and richness. It is a vivid example of how different cultures can live together peacefully and in good rapport, and yet they preserve their own identities. Noah’s pudding reminds us of our common values: Love, peace, respect, compassion, modesty, generosity, trust, altruism, inspiration, hope, integrity…As humankind, we are all on the same boat together regardless of our differences. This is the big picture whereby Noah’s Pudding teaches us a lesson.