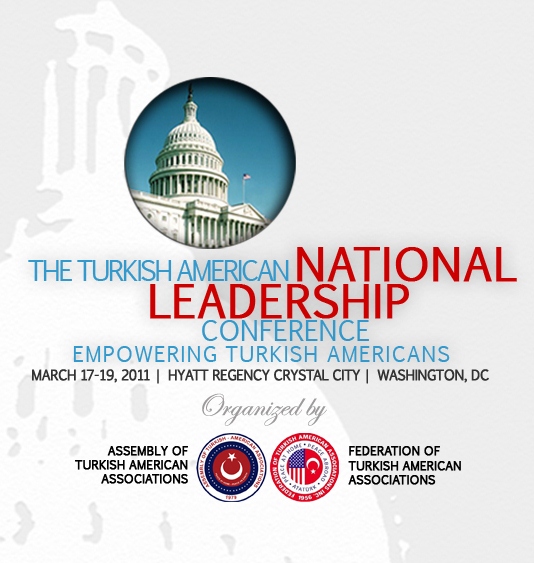 The first day of a three day, The Turkish American National Leadership Conference – Empowering Turkish Americans, was concluded yesterday with the Ambassador’s reception at the magnificient Turkish Embassy Residence in Washington DC. Prominent members of the Turkish-American community, students from several universities in and around WDC, including three 13 year old elementary school students, and many Turks, including a young Turkish-American who drove 30 hours from Texas attended the reception. Professor Dr. Justin McCharty and his wife and many academicians and businessmen were also at the conference and the reception.

The conference has been organized by the two umbrella organizations; Washington DC based, “Assembly of Turkish – American Associations – ATAA” and the New York based “Federation of Turkish – American Associations – FTAA” with support from the “Turkish Coalition of America” and the “Turkish Cultural Foundation.” The official language of the conference and the Program book were all in English, including the presentations, except State Minister Egemen Bagis also spoke in Turkish after his presentation in English, which is to be commended. After all, this is a conference for the Turks in America and the Turkish-Americans, or, perhaps to follow the example of a speaker on the American Jews, perhaps we should refer to us as the American Turks.

The Conference was opened with a video address by the Turkish Minister of Foreign Affairs, HE Ahmet Davutoglu, followed by welcoming speeches by Gunay Evinch, the President of ATAA and Kaya Boztepe, the President of FTAA. These were followed by  remarks from the Arlington City Council Chairman Chris Zimmerman, the Host county, and the Mayor of Alexandria city William D. Euille. HE Ambassador Namik Tan spoke about the role of the Turkish-Americans and HE State Minister Egemen Bagis reminisced his 17 years in America before going to Turkey and entering politics and provided many advise, including a strong statement that, the Turkish-Americans should love each other.” Of course, the first requirement for this is “knowing each other.” A simple example of this is the lack of name tags for the Conference participants except for the speakers.

The first panel was on “US-Turkish Relations: Challenges and Opportunities“, moderated by Mark Meirowitz, advisor to ATAA and FTAA Presidents. Suleyman Gokce, Deputy Chief of Mission, Turkish Embassy, and Jess Baily, Director, Office of Southern Europe in the Bureau of European & Eurasian Affairs, spoke in length on various issues. Following the first question by the Moderator himself and long responses, three questions were allowed to the participants, one of which was on the Turkish-Israeli relations and the Boat Marmara incident. I asked two questions; one whether any action was being taken for the removal of the fabricated statement by Hitler on the Armenian issue displayed at the US Jewish Memorial Museum, visited by 2.5 million people every year. The second question was whether there was a Turkish Library and Museum in the US? Neither questions were responded to, but was discussed in length outside the conference room with Mr. Baily.

Open Letter To: President Barack Obama – On the “Armenian Resolutions”, “Discriminations” and the...