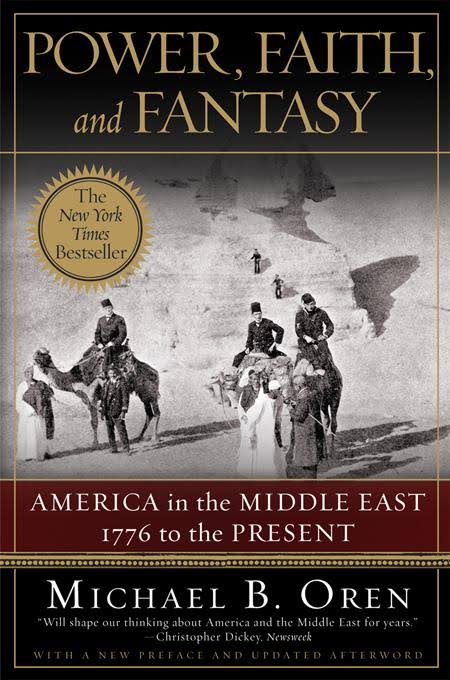 By Michael B. Oren, a senior American – Israeli fellow at the Shalem Center in Jerusalem who lives there with his wife and three children. Published in 2007.

The book is a survey of U.S. involvement in the Middle East over the past 230 years, beginning in 1776, with a chronology of events listing major events from 1776 to 2006 and presents a map of the Middle East and Israel,

For the year 1923, the chronology includes the following:
1923 Khalil Gibran’s The Prophet is published.

There is no mention of the establishment of the Republic of Turkey and incredibly, nothing about the accomplishments of Mustafa Kemal Ataturk, who is still an inspiration to many leaders in the Middle East and other countries around the world. This is what Michael B. Oren writes about Mustafa Kemal under the title “Postwar Postmortem.”

“The Ottoman Empire, the forbidding and exotic polity that, for centuries, had dominated the crossroads of the world, alternately terrorizing and enchanting Westerners – Americans included – was demolished.

But not Turkey. A forty-year-old general named Mustapha Kemal, the hero of Gallipoli refused to accept the San Remo dictate and rallied the army against it. Three years later, Kemal – later to take the title Ataturk (father of the Turks) had succeeded in driving all foreign troops from the Anatolian homeland.

Collaborating with the Soviets, Kemal crushed the Armenian independence movement and suppressed Kurdish separatists. In the Symrna area, tens of thousands of Armenians and Greeks were killed and 250,000 people expelled as Turkish troops sacked and burned the city.”

That is all about Turkey and Ataturk, except a reference to the Lausanne Treaty signed on July 24, 1923 (p.394) and notes on minor incidents during the Ottoman period. No mention of the creation of the Republic of Turkey or the many reforms in the 778-page book with 32 pages of photographs, excluding Turks.

Many books and articles are published around the world frequently by Armenians who present a one-sided view their relocations that took place during and after the First World War without ever mentioning the Armenian rebellions, which is a sad chapter in the history of the Armenians and the Turks.

And there are those like Michael B. Oren who simply present information that supports the Armenian point of view, totally ignoring the Turkish side of the events, as if they are totally against the presence of Turkey in the Middle East. There are over 35 pages devoted to the Armenians and the Armenian genocide and, in a review of the book included in the back cover, Henry Kissinger states. “A tour the force, brilliantly researched and written, and extremely interesting, as well as informative.”

Words Under The Lens: “ACKNOWLEDGEMENT”, “ADMISSION”, “CONFESSION” and Other Related Latin...

William Saroyan, the Armenian-American Writer, Honored on his 100th Birthday,...