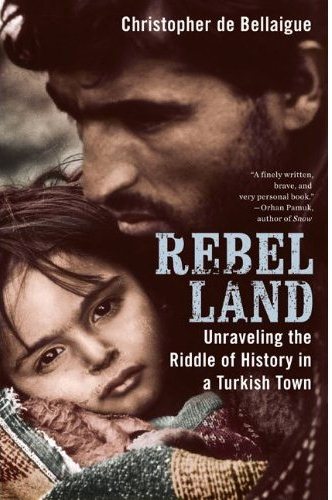 The cover of the book includes a photograph of a man and his daughter, both sad looking, and praise for the book by Orhan Pamuk, “A finely written, brave, and very personal book.” These are enough to turn one off from reading the book, but I did it anyway after a friend asked me for a review. After searching several book stores, and being told that the book was withdrawn due to lack of interest, even at Barnes & Noble in Princeton, I located a copy at the Warren County Public Library in Washington NJ and read it over the weekend.

Evidently, the author decided to write the book after one of his articles in the New York Review of Books was rebuked by James Russell, a professor of Armenian studies at Harvard for stating that half a million Armenians died during the First World War when Armenians revolted against their government and, as a consequence, were re-located. Mr Russell in his letter to the New York Review of Books repeated what many Armenians and their supporters claim shamelessly that 1.5 million Armenians died, which has been proven to be a lie and a fabrication (1). No one knows exactly how many Armenians, Turks, Kurds and others died during the conflict which was started by the Armenians long before 1915.

The 270-page book opens with a Prologue: The Mirror, and tells many different stories in 10 chapters and ends with an Epilogue: the Silver Belt. The author, who has learned to speak Turkish during an earlier assignment in Turkey, decides to go to Varto, a small town in eastern Anatolia. In the first chapter, the author writes about the captain who is reading the best seller in Turkey, “The Crazy Turks” and belittles the story, claiming that it does not contain anything more than a reiteration of events that everyone knows. He meets the Mayor, the captain of the Jandarme, and many notables, including Mehmet Serif Firat who has written a book about the region, “History of Varto and the Eastern province.” In Chapter 5, the author tells about the death of Firat.

There is too much emphasis on ethnicity and the author complains that not enough studies have been conducted to determine who is a Turk, who is Kurd and what their religions are, which is useless. First, he explains who the Kurds and Alevis are. There are too many characters in the book that the author writes about and makes frequent references to Orhan Pamuk, Hrant Dink, Deniz Gezmis and many others, mixing apples and oranges. There is nothing new that a reader can learn from this book and the use of pictures of swords and rifles in between paragraph is disgusting. No wonder the book did not sell and the bookstores withdrew the book. And a reviewer in amazon.com boldly states: An esteemed journalist travels to Turkey to investigate the legacy of the Armenian genocide and the quest for Kurdish statehood. What nonsense.