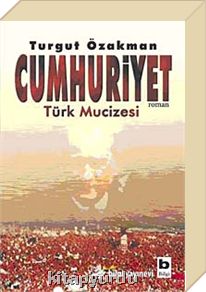 I borrowed the title from Turkish Forum President Kaya Buyukataman’s recent message to the ATAA yahoo group on the Greek landing in Izmir for the review of a wonderful new book by Turgut Ozakman, “Cumhuriyet – Republic – the Turkish Miracle”, actually written for the Turkish youth. We all know that U.S.A participated in the Lausanne Treaty negotiations, but believing that it was only as an “Observer” and the only country that has not ratified it in the US Senate. In fact, the book begins in Izmir.

This excellent book, the third in the series that began with “Cilgin Turkler – The Crazy Turks, and “Dirilis – The Resurrection”, tells otherwise. U.S.A delegation not only attended the conference as an observer but also presented their views on certain issues during the conference and influenced the thinking of England-Franch-Italian collaborators to force the Turkish delegation representing the Turkish Grand National Assembly, under Ismet Pasa’ leadership, to accept their terms, which they failed. Mr. Child, the head of the US Delegation even visited Ismet Inonu together with Lord Curzon of England outside the conference hall, where Curzon made his famous treats that in the future they will take back everything that Turks hopes to win today.

Among many other accomplishments, the signing of the Lausanne Treaty on 24 July 1922  that led to the proclamation of the Republic of Turkey on 29 October 1923, was truly a miracle, as beautifully told in the 436-page book. The treaty is first signed by Ismet Pasa and other members of the Turkish delegation followed by the representatives of England, France and Italy. The deputy head of the ABD Observers Team, Mr Grew states the following: “Ismet Pasa has won a tremendous diplomatic victory at Lausanne. perhaps this is the greatest diplomatic victory won in history. Mr Grew later is appointed as the first US Ambassador to the Republic of Turkey and negotiates a Commercial Treat which many believe that it took the place of the Lausanne treaty rejected by the US Senate under heavy anti-Turkish propaganda.
“Cumhuriyet – Republic – the Turkish Miracle” consists of two parts; The Beginning: 28 September 1922 to 11 November 1922″ and “From Righteous Battle to Beautiful Peace: 12 November 1922 – 29 October 1923. There are 91 pages of footnotes, a total of 144 with explanations and references. This is actually the first volume of a two-volume book that tells the behind the scene stories and the negotiations that took place during the Lausanne Treaty Conference and the creation of the Republic of Turkey.

The first chapter opens with a description of the celebrations following the liberation of Izmir on 9 September 1922 and the relocation of M. Kemal Pasa’s headquarters from Kordon to the Usakligil Villa in Goztepe. In later chapters, Ozakman tells about the wedding of M. Kemal Pasa to Latife Hanim, whom he meets at the Usakligil villa. He travels to Izmir many times including after her mother Zubeyde Hanim dies and is buried there.

Every commander and leader, both Turkish and foreigner, who were involved during those years are mentioned, complete with their photographs. The book tells us that General Kazim Karabekir did not only care for the Armenian orphans but also for over 2,000 Turkish children who lost their fathers in the war, which is seldom mentioned.

There are many references to the state of the railroads and Meric, the legendary General Manager of the Railroad Company at the time, owned by foreigners, who made sure the repairs were made and the trains ran, the only means of long-distance travel between Ankara, Afyon, Izmir and Istanbul by way of Izmit.

The book also tells the tragic story of Fikriye Hanim who falls in love with M. Kemal Pasa who chooses to marry Latife Hanim. Fikriye Hanim spends some time in a Sanatorium in Switzerland and committed suicide, which is told in many books about her life.

The book ends with the proclamation of the Republic of Turkey on 29 October 1923 at 20:30 PM.  Commander of an artillery battalion Ismail Hakki Tekce standing in front of the Turkish Grand National Assembly orders his men to begin firing of 101 canons. This is followed by the election of Mustafa Kemal Pasa as the First President of the Republic at 20:45 PM.  Commander Ismail Hakki runs to the telephone to give the news to Latife Hanim. She responds by saying, “What do you want me to do Hakki Bey. So what if he was elected the President.”

In the forefront of the book, Ozakman asks a question: “Why Ataturk is great, and why do we remember him with increasing respect and gratitude?” Then he states that Ataturk is the only leader in the history of mankind who was victorious with very little means and people under destitution. The foreigners do not understand our devotion to him simply because they have never seen an example before.

Ernest Hemingway was among the many reporters who came to Turkey to witness the miracle and wrote for The Daily Toronto Daily Star, sometimes not accurately and staying at Pera Palas Hotel, where gossip was probably heard more than the truth. M. Kemal Pasa gave numerous press conferences where he wanted to make sure the Turks, including many opponents, and the people from around the world learned about the happenings truthfully. These are all covered in the book with interesting stories, including the participation of Halide Adip Adivar and the tragic death of Ali Kemal, whose grandson is now the Mayor of London.

Turks are being frequently advised to face their history on many issues including the “Dersim Uprisings” in 1937, a city was known at the time as Tunceli and visited by Ataturk. Well, this writer happens to believe that not only the Turks but all the countries that created the “Eastern Question” should face their history, especially the Americans who shaped the thinking of the youth of Ottoman Turkey during the late 19th century and the early 20th century and for many years.

The Efforts over NGO’s and Media for the Acceptance of PKK Terrorist Organization as...