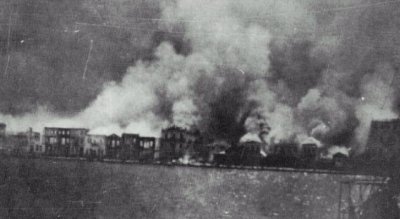 A new book by Mehmet Coral, Doga Book, August 2008, Review by Yuksel Oktay
13 September 2008 marks the 86th anniversary of the great Izmir fire that destroyed three fourth of the city in 1922. The first book that I read about the Izmir fire was ‘’Symrna 1922: The Destruction of a City,” by Housepian Dobkin, published first in 1972, which I had borrowed from the Central Library in Mexico City during an assignment there, where other books on the Armenian issue were also available. The version referenced in Atesin Gelini is dated 1988, published by The Kent State University in Ohio. It seems that this untruthful book is being published over and over again.

The book opens with the following paragraph, which is mostly nothing than a distortion of facts but fed to the unsuspecting readers around the world for over 36 years and used as reference:

In September 1922, Mustapha Kemal {Ataturk}, the victorious revolutionary ruler of Turkey, led his troops into Smyrna (now Izmir ) a predominantly Christian city, as a flotilla of 27 Allied warships– including three American destroyers– looked on. The Turks soon proceeded to indulge in an orgy of pillage, rape and slaughter that the Western powers anxious to protect their oil and trade interests in Turkey, condoned by their silence and refusal to intervene. Turkish forces then set fire to the legendary city and totally destroyed it. There followed a massive cover-up by tacit agreement of the Western Allies who had defeated Turkey and Germany during World War I. By 1923 Smyrna ‘s demise was all but expunged from historical memory.

Since then, I read many books and articles on the Izmir Fire, probably the most famous after the fire of Rome supposedly started by Emperor Neron in 64 AD, including a commentary by Prof. Dr Turkkaya Ataov published in Cumhuriyet. Now there is a new book that just came out that tells the story of this tragic event with documents that prove that the fire was not started by the Turks as the above book claims but by Armenians as revenge.

The author has researched the origins of the fire for many years through hundreds of documents and has reached the conclusion that the Armenians were responsible for the fire. The Turks who took back the city on September 9 had no reason to burn such a possession which was inhabited by Turks and many other nationalities for over 500 years. Izmir, the home of famous father of history Homeros has a history of over 3,000 years.

The 305-page book consists of 11 sections (32 pages) followed by four sections of photographs taken during various periods, beginning with the latter part of the 19th century and the early 20th century, with commentaries (250 pages.)

The last section, Son Soz – Final Word, begins with the saying of Flavius Philostratus: ”The Asia’s torch, the most beautiful city illuminated by the Sun.” Then, the author gives a summary of events that led to the destruction of Izmir and the atrocities committed by the retreating Greek forces that also included several Armenian units organized at the beginning of the invasion.

1.  Following the 3 years of War of Independence, the Battle of the Commander-In-Chief that started on August was won on August 30 and the Greek army was defeated.

2.  The Greek soldiers began their desperately flee towards Imir and along the way, burnt down many villages and towns, raped women and young girls and massacred defenceless Turks.

3.  The local Greeks (Rums) and Armenians who had welcomed the Greek army with open arms, joined the fleeing Greek army, participating in the inhuman treatment of local people and burnt the city of Usak.

4.  On September 2, the Turkish Army entered Usak and found General Trikopis getting ready for am attack, and took him, prisoner, with his staff and soldiers. Mustafa Kemal informed Trikopis that he was just appointed as the Commander-in-Chief of the Greek forces.

5.  On September 4, the fleeing Greek army with their supposedly legendary commander General burned Alasehir and many villages, just as they did across Western Anatolia.

6. Fleeing with the Greek army were Armenian volunteers under Armenian General Turkon, who participated in the destruction and the fires that they started.

7. On September 5, the Greek army reached Salihli, which they burned and on Sept 7, they reached Turgutlu, which was also burned. receiving orders from the Greek High Command, the Greek forces rushed to Cesme and left for Greece, the last one on September 14.

The retreating Greek forces burned over 200 villages and towns, destroyed over 280,000 houses and acres of land with crops. General Plasteras together with General Gonatas returned to Greece and taking over the government, paved the way for the hanging of those whıo were responsible for the ”Anatolian Disaster.”

The Turkish forces entered Izmir on September 9, exposed to sniper fires by the Greeks who were hiding in Tuzakoglu and a bomb was thrown by an Armenian (Greek according to some sources). The Turkish forces reached the Governor’s Building and the Turkish flag was hung.

Mustafa Kemal came to Izmir on September 10 and met w[th the representatives of foreign countries. He also made assignments for the control of the city and appointed Nurettin Pasa as the Governor of the city which he later regretted.

On September 11 the entire city except the Armenian quarter was under control. On September 12 the Armenians were told that they could leave the cit with their possessions. On the same day Yakup Kadri Karaosmanoglu, Falih Rifki Atay and Asim (Us) arrived in Izmir to report the events taking place.

On September 13, a fire was started in the Armenian quarter which spread rapidly and eventually engulfed the entire section. The efforts of the firefighters could not stop the fire which extends when the wind direction changes and makes the fire worse. On September 15 the force of the wind dwindles but the fire keeps burning.

Various sources give a different account of the fire among them the US Consul General George Horton who issues anti-Turkish propaganda (1) blaming the Turks for the fire (seems to have followed in the footsteps of US Ambassador Morgenthau of the 1915s.)

This is a well-written hardcover book with many photographs and a short bibliography but hard to read due to small size letters. Anyone interested in finding out who burnt Izmir (certainly not the Turks) should read this book.

(1)   The Blight of Asia: An Account of the Systematic Extermination of Christian Populations by Mohammedans and the Culpability of Certain Great Powers; With the True Story of (Sterndale Classics) (Paperback), by US Consul General in Izmir George Horton.