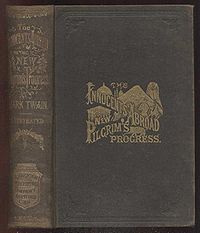 During our high school years at Talas and Tarsus, books by Mark Twain were among the many that we read with great joy, including Huckleberry Finn and Tom Sawyer. To many, Mark Twain was the Lincoln of the American literature, whose real name was Sam Clemens (1835-1910). Among his wonderful travelogues are “Roughing It’’, “Following the Equator”; “Life on the Mississippi” and “The Innocents Abroad” published in 1869.

Twain was a reporter who joined the six-month expedition to Europe and the Middle East onboard the steamer “Quaker City.” The pleasure tour had been organized by the famous pastor Henry Ward Beecher and Civil War General William Tecumseh Sherman (who is famous for burning Atlanta.) Neither of these notable made the trip citing other obligations. Twain roomed with a young man from Elmira New York and after a visit to Elmira he meets his friend’s sister Olivia. She would become his wife and the mother of the couple’s three daughters.

The Innocents Abroad is a long book of 500 pages. Twain travels through Florence, Rome, London, Paris and meets Czar Alexander II in the Crimea. He tours Syria, Lebanon, Greece and Israel and spends some time in Istanbul, known as Constantinople at the time. In Chapter 34 (pages 233 -241), Twain tells the story of his visits to a Slave-Girl Market, his confrontations with dogs in the streets, experience with nargile and indulgence in a Turkish bath. The chapter opens with the following statement:

At the end of the chapter, Twain writes about his dislike of the Turkish coffee, stating that, “of all the unchristian beverages that ever passed my lips, Turkish coffee is the worst.” Now, even Starbucks sells Turkish coffee.

This is an interesting book with a lot of funny episodes but certainly not in praise of a country which he saw only a part of, Turkey.