Following the opening speeches by Erman Yerdelen, the CEO of Dogus Media Group, Jimmy Wales, the Wikipedia Founder, spoke about the free information exchange in the world. He stated that everyone produces information freely and consumes it free and talked about how this will effect life and business in the future. The number of users of wikipedia has increaed from 365 million in 2001 to 420 million in 2011 which has 16 million articles in about 200 languages, including Turkish with 170,000 Turkish entries. Articles are written by volunteers and also edited by volunteers, where more Turkish editors are neded.. Wales spoke about the principles that govern Wikipedia, including neutrality, free licensing and civility. The Project is run by a Foundation which is funded by donations.

Several other speakers spoke about their experience with online financing, investments, e-commerce and the impact of inernet on business and commerce. The star of the conference, Julian Assange, spoke for over two hours via video conference from his home in England. Stating that he would have loved to come to İstanbul but being under house arrest for over 300 days, this would not be possible. He stated that believing lies is easier than searching for the truth and commented on the Turkish – American relations, which he said is no longer based on saying yes to eveything that the US wants. He talked about his astonishment after watching ‘’The Valley of the Wolves – Palestine’’ which, he said is like  another Holywood movie but showing a different aspect of the Israel – Palestine conflict. Referring to the New York Times and the Guardian as the ‘’False Prophets’’ of the media, Assange said that the Turkish media had nothing to be ashamed of although reforms are needed.

The conference ended around 7:00 PM following a question and answer session, where some of the questions were in Turkish with translation.  Assange provided answers with details and finally with tears in his eyes when the audience applauded him for a long time.

A Commentary was written back in December 2010 following the firts revelations about the Wikileaks, which is given in the Attachemnt. Many speakers and Julian Assange stated during the conference that there is a new media order in the world, which will continue to be discussed.

Photo by Matthew Guay on Unsplash 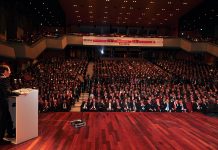 A Symposium, A Book Release and a Turkish Lady with a...