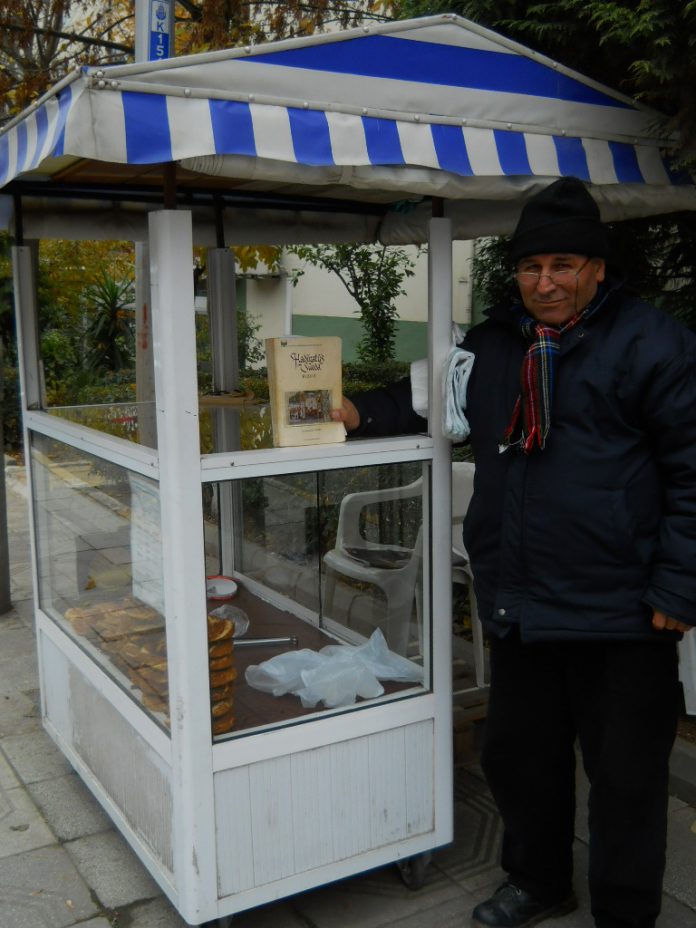 Even though İstanbul has hundreds and thousands of restaurants and cafes all around the city, the vendors that sell pohça and simit are still abundant, including in Kozyatagı, Kadıköy. As I was walking past the cart full of Simit two days ago, I noticed that the vendor was reading a book, a rare picture. I stopped and after saying good morning,  I asked the vendor what he was reading. He smiled and showed me the cover of the book: The title was: ‘’Fuzuli – Hadikatü’s S-Sueda’’, by Şeyma Güngör, published by the Ministry of Culture, as part of a series as ‘’Source Books.’’ When I asked him, what the subject was, he said, ‘’The Kerbela,’’ the story of the murder of Hazrat Ali in the 7th century in a town now in Iraq, which is considered a sacred place for the Şiis and Alevis. When I told him that perhaps he should be reading books on ‘’Dersim,’’ the hotly debated issue of the day, he smiled again and said, I have been reading about Dersim for 35 years. I know all about it.’’

The vendor’s name was Rıza Balta, from Karakaya village, Sivas, but his parents were originally from Dersim. (A coincidence since the name of the Kurdish rebel was Seyit Rıza.) Since I was headed for the airport, I could not continue with the conversation but asked his permission to take his photograph. He said yes, shown in the Attachment, which I will make a copy and present to him and perhaps continue with our conversation since he knew a lot about what had happened in Dersim many years ago. The subject has been hotly debated since the revelations, first by the former Deputy Onur Oymen on TV 10 Nov 2009 and again by CHP deputy,  Hüseyin Aygün,  ironically also on Nov 10, 2011, although he had given the interview to Zaman newspaper on Oct 31, prompting discussions on almost every tv channel and the publication of articles in many newspapers, which is still continuing.

Waiting, the same day, for the flight to Ankara at the Sabiha Gökçen Airport on the Asian side of İstanbul, I read several newspaper articles on Dersim including the suggestions made by Deputy Metin Metiner and Radikal columnist Cengiz Çandar that the name of the airport be changed, Çandar even stating that it should be re-named ‘’Hrant Dink Airport.’’ The reason for this nonsense is the role that Sabiha Gökçen has played during the 1938 operation against the uprisings in Dersim, re-named as Tunceli, back in 1935.

When you write ‘’Dersim’’ in google, a list of close to 100 books appears, including 9 published by ‘’Kaynak Yayınları’’, 2 based on the Joint Chief documents, ‘’The Kurdish Uprisings.’’ The Dersim events, referred in the media as ‘’Dersim Uprisings, Dersim Killings, Dersim Massacres’’, some without any reference to the causes of the events, is very complex and goes back to the early days of the Republic. At that time, Dersim was almost non-governable according to the new laws and regulations as the area was under the control of local chieftains who wanted their centuries-old feudal system to continue. There have been many articles published on the events, some simply stating that the people from Dersim were first massacred and then subjected to forced relocation to the west, without mentioning the root causes and the uprisings. It is true that many people were settled in the west, including a large number of families in Safranbolu, where I grew up. They lived in a neighboorhood in Gümüş, where we never visited until I took Stephen Kinzer there back in 1998 during the 75th anniversary of the Republic.

In 2000, I had a chance to attend the ‘’Munzur Festival’’ in Tunceli while visiting the nearby Karakaya HES on the Euphrates. I met several families at the festival and even spent a night at the house of a Kurdish family that I met there since all the hotels were fully booked, one of my most memorable days in Turkey (2). Afterwards, I corresponded with a university student who wrote to me about Dersim, but when I mentioned the Seyh Sait uprisings, she stopped writing. Since then I read many books, listened to many experts on the Dersim events and tried to understand the situation, which can be summarized as follows:

3. Complaints continued from the governors and the governor of Elazığ Ali CemalBardakçı, the grandfather of the historian Murat Bardakçı, prepared a Report in 1926, which advocated education for the region, followed by other reports.. However, according to an article in today’s HaberTurk newspaper by Murat Bardaçı, contrary to the recommendations in the Report, a force was used which resulted in the death of over 13,000 in Dersim.

This is not a subject that can be understood easily and without reading many books available to those interested in learning the truth. The deputy and author Hüseyin Aygün in his book titled Dersim 1938 and Obligatory Settlement and many other books tell the sad story of Dersim, which I have not read and can not be understood fully without the opening of the Ministry and military archives. When I gave the copy of the photograph to Rıza, I wanted to ask him questions but changed my mind. He gave me his permission to use his photograph in my article and stated that the Alevis in Turkey were over 35% of the population and that they were good people. I agreed and bought a simit, first time in a long time.