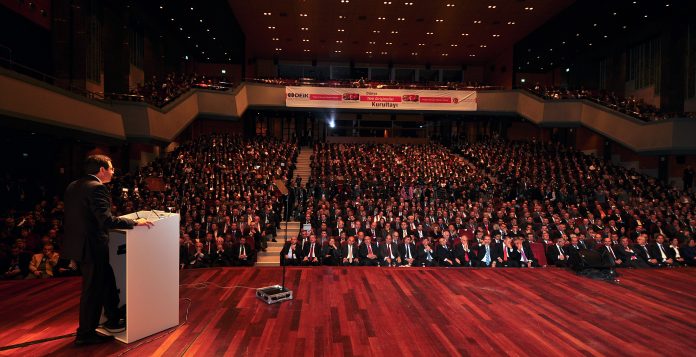 An article published in the November 19th 2011 issue of the Economists, ‘’The Magic of Diasporas’’ states that ‘’Immigrant Networks are a rare bright spark in the world economy. Rich countries should welcome them.’’ The full-page article talks primarily about the Chinese and the Indian diasporas with reference to those of Huguenots, Scots, Lebanese, Japanese and Jews, part of 215 million first-generation migrants around the world, but does not mention the Turks although their number of all generations in Europe is close to 6 million. The main argument of the article is that the  Networks of kinship and language make it easier to do business across borders, diasporas help spread ideas and Money.

The opening speeches were made by M. Rifat Hisarcıklıoğlu, the President of TOBB, Rona Yırcalı, the Chairman of the Board of Directors of DEIK, Kemal Yurtnaç, the President of Overseas Turks, and Zafer Çağlayan, the Minister of Economy. Some figures mentioned during the speeches include:

The regional presentations after the opening speeches included the following sessions:

During the Professional sessions monitored by Zafer Çağlayan, four speakers made excellent presentations, including a video message by Dr Mehmet Öz of Columbia University, who spoke first and in Turkish. Dr Oz stated that his TV program is shown in 112 countries for educational purposes and suggested that funds should be made available for students to prevent brain drain. Dr Oz’s father, Dr Mustafa Oz, spoke after his son’s presentations and stated that during his 50 years of professional life in the US, he managed to bring his children to Turkey every year to make sure they learned Turkish and experienced the Turkish culture.

The next speaker was Ali Sabancı, who was introduced as the President of the Young Entrepreneurs Association of DEIK and the creator of the PEGASUS Airline. Sabancı said that he knows all about the diaspora since he studied and worked abroad in Germany and America and suggested that the diaspora Turks should invest in Turkey rather than returning home. Sabancı also gave some figures related to Turkish experience stating that Turks were 5th in Facebook usage.

Ali Beba, the head of the School of Entrepreneurship at Hong Kong Technology University, said that his wife was among the top managers at Pepsi Cola and talked about the successes of Turkish entrepreneurs abroad. Hüsnu Özyeğin spoke about his life in the United States, where he received an MBA at Harvard University while operating a small eatery and made several recommendations, including advice that Turks abroad should send their children and grandchildren to universities in Turkey and provide funds to build quarters for girls.

The next speaker, Hikmet Ersek, introduced himself as the CEO of Western Union, one of only 2 Turkish CEO of Fortune 500 companies (the other is Muhtar Kent, the CEO of Coca Cola Company) and stated that although he was born in Austria to a Turkish father and an Austrian mother, he considered himself a Turk and suggested that Turkish entrepreneurs abroad should be given the blue passports.

The above sessions were followed by meetings between various groups and strategic projects.

Several speakers stated that there are over 3,900 Turkish associations around the world, but none of these were mentioned, not even the umbrella organizations such as  the Federation of Turkish American Associations (FTAA) or the Assembly of Turkish American Associations (ATAA), which has participated with a delegation or the new federations which have many associations as members. As far as I could see during my limited time at the convention, among the many that included several commercial companies and Business Associations abroad, such as the ‘’Turkish-Russian Businessmen’s Association‘’, there was a stand of “Yunus Emre Institute” from Ankara which has established many Cultural Centers in several European countries.. I did not see a stand for ‘’Turkish Cultural Center’’ which has many centres across America and organizes many events, or the Turkish Coalition of America (TCA), which is involved in many Turkish events in the US.

There was no mention on how to fight against the anti-Turkish propaganda, which is rampant through books, publications and TV programs, and impacts not only the economic interests of Turks and Turkey but also the daily lives in certain areas.

All in all, the Convention was successful with several excellent presentations and publications were made available, such as ‘’Dünyada Diaspora Stratejeleri – Türk Diasporası için Öneriler’’ in Turkish and  ‘’Küresel – Special Issue’’ both in Turkish and English. The official language of the convention was Turkish, which was also an excellent choice.

Baba Turbeh in Fulya, Besiktas – Modern but Fake – Only...