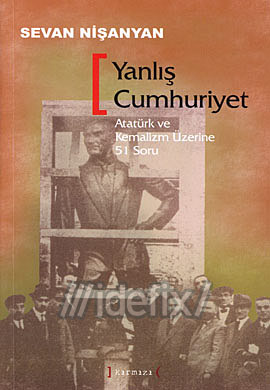 By Sevan Nisanyan, in Turkish by Kirmizi Publishing House, May 2008, Second Printing, July 2008

The author of this book has joined the long list of writers, mostly foreign, who have chosen to attack Ataturk and the Turkish Republic that he founded rather than to make suggestions as to how to understand his principles and improve on the accomplishments to date. A letter sent to a number of these foreign writers who have dared to criticize Ataturk is given at the end of the book review together with a commentary on Ataturk’s leadership.

The author of this book is a small hotel owner in Sirince, a historical village high on the hills near Selcuk, a columnist at AGOS (a weekly newspaper published in Turkish and  Armenian in Istanbul,) and also the author of several guide books on Turkey and a directory of small hotels in Turkey. He became famous recently when he threw a jar of his excrement over his wife’s head during an argument, who is suing him for 300,000 YTL and, and his wife of 17 years, Mujde Nisanyan, has filed for divorce.

The 438-page books open with a chapter, “View from 2008” where the author states that he wrote the book 1993-1994 and for some reason did not publish it. He claims that most of the arguments presented are still valid today although some conclusions may not be, but the biggest obstacle in front of free-thinking has not been cleared.

The author states that his purpose in writing the book was to present unpopular views that have been lingering for over 70 years under three major headings. First, Nisanyan states that we all grew up believing that the last century of the Ottoman Empire was a period of decay. However, his journeys around the country have shown him that this was not the case and the last century had brought advancements to Anatolia.

He also states that the architecture of that period and remnants of daily lives as told in the memoirs show that much had been accomplished and argues that, on the contrary, the first 38 years of the Republic did not bring anything other than break down of cultural and economic advances.

The second issue, according to Nisanyan, is the assault of those representing themselves as the protector of the laic regime against the increasing Islamic radicalism. Nisanyan states that he realized the unsoundness of this thinking which is concealed behind the Ataturk way of thinking.

As the third issue, the author believes that perhaps the answers that the Islamists tried to provide with the help of an ideology that has not renewed itself for centuries were not sufficient.

The questions are presented under eight sections followed by a “Final Word” and a list of references. Several of the 51 questions are presented in this review, to which the answers would be obvious but not given by the author. Being of Armenian descent and an advocate of Armenian thesis, I thought Nisanyan would devote a good portion of his book to the Armenian issue, perhaps referring one of the questions to Ataturk’ rejection of the false Armenian genocide claims. The only question in the section on “War of Liberation”, asks ;

The author does not give an answer to this question but makes references to US President Woodrow Wilson as the supporter of Armenian issues and to US Ambassador Morgenthau’s untruthful book, “Ambassador Morgenthau’s Story”, stating that it was simply a propaganda material and that Wilson rejected a movie version, something mentioned by an Armenian for the first time.

Under the first section, Historical Perspectives, the author presents his first question:
1. Is Kemal Ataturk the representative of political thinking like no other in the world?
2. Is the permanency of the Kemalist regime the result of characteristics like none in the world.

The second section is “Democracy and the Republic” with 10 questions on various aspects of the final days of the Ottoman Empire.

3. Is the regime founded by Ataturk democratic?
13.   Was the Caliphate a product of  “Middle Age” mentality. Was its abolishment necessary for the Modern state?

The third section Worshipper Culture questions whether the Kemalist Regime helped the elimination of worshipper culture and the characteristics of worships towards individuals.
The fourth section Revolution questions the reforms that were started during Ataturk’s time, from change of alphabet to women’s rights.

The fifth section, Laicism, questions whether the Turkish republic is laic and the characteristics of the Ottoman Empire .

The sixth section, Natioanlsim,  begins with a questions whether Turks were considered inferior to other nationalties and Ataturks’s nationalism.

In the seventh section, the author asks 8 questions on the war of Liberation and whether the Turks would have come under the American Mandate:

51.  If there was no War of Liberation, would Turkey come under the American Mandate?
In the last section of the book, The Final Word, the author admits that there are certain characteristics of Ataturk that can be praised despite the years of devotion, further stating that Ataturk had an undeniable charisma.

At the same time, the author dares to state that Ataturk’s culture was limited, basing this on lack of education outside of the military. This alone shows the author’s ignorance of the excellent curriculum followed in military schools and Ataturk’s extensive library of over 3.500 books, some of which he even read during the times of war and recommended to his commanders. Ataturk’s name appears on the creation of almost every establishment in Turkey, from the State Hydraulics Works to the Turkish Airlines to Universities. The author even dares to refer to the extension of the railway system during Ataturk time as a period of the quagmire. How sad.

On p. 431, the author likens Ataturk to Mussolini and Franco and gives credit to Nelson Mandella for his rejection of Ataturk prize. How unrealistic and sad.

I showed the book to a German colleague working on a wind farm project in Antakya, Hatay, who had read about the Armenian issue and had told me that the Ottoman Turks were responsible for the mythical Armenian genocide. I presented to him a copy of a document ‘White Paper’’ which refutes the claims. He asked me why I was reading the book since it was clearly anti-Turkish and anti-Ataturk. I told him that this was a cleverly written book by someone who has no love of his country and the creator of the Republic of Turkey, who criticizes but gives no solutions to problems in today’s Turkey.

Perhaps, reading the study of an American professor of all the leaders of the 20th century (which took him 17 years) where he picks Mustafa Kemal Ataturk as the greatest leader of the 20th century, summarized in the commentary below, may do a lot of good to Nisanyan and perhaps give a reason to thank Ataturk for all the worldly goods that he has accumulated over the years. I would also recommend Nısanyan to read a new book that just came out, ATATÜRK ALIVE In his Own Words, by Prof. Talat S. Halman. This is what the introduction states:

‘Destiny has endowed very few individuals WİTH ANY OF Ataturk’s achievements. The protagonist of his nation’s sovereignty. Undefeated commander. Pioneer of anticolonialism. Staunchestfoe of imperialism at home and abroad. Creator of a republic. The transformer of the political, legal and socio-economic systems. Spellbinding orator. Cultural revolutionary. Secularist visionary. Humanist and international peacemaker. Model for the leaders of emancipation and of emerging nations. The hero of the 20th-century renaissance.’

Baba Turbeh in Fulya, Besiktas – Modern but Fake – Only in Turkey

“Words Under the Lens Series”-#2: The latin word “FERRAMENTUM” sourced from...