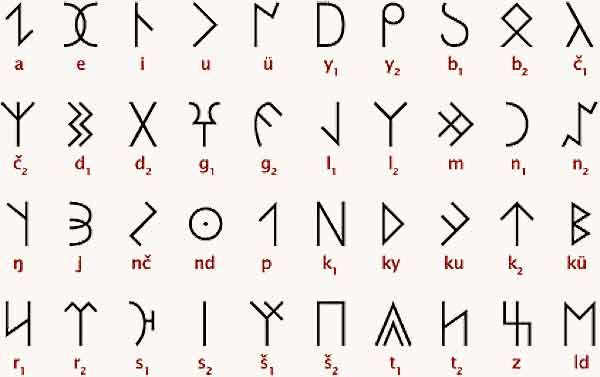 The word #3 of the “Words Under the Lens Series” is the Greek word TETHWRAKISMENOS which means “armored, ironclad”, [Divry’s English-Greek and Greek-English Dictionary, New York, 1988, p. 532].  This means wearing iron-made protection (armor) on the body.
In the word TETHWRAKISMENOS, the “TH” stands for the Greek letter “titha”, that is, “TH” which is actually a combination of the letters “T” + “H” and “H” is read as an “I”, [Divry’s English-Greek Dictionary, 1988, p. 10] and the symbol W is a letter of disguise made up UU, VV, YY, U, V, Y or any two-letter combination of U, V and Y.  In this word W takes the form of UU.

With this background information, when the word TETHWRAKISMENOS is deciphered letter-by-letter as “U-OSINE-TEMUR-TAKHS”, we find that it is a restructured, Hellenized and disguised form of the Turkish expression “O-ÖZINE-TEMUR-TAKIŞ” (O-ÖZINE-DEMIR-TAKIŞ) meaning “it is putting on iron on to yourself” or “it is wearing iron on your body”. This is exactly what the terms “ironclad” and “armoured” mean!  Finding this kind of exact correspondence between the Greek word TETHWRAKISMENOS and its deciphered form in Turkish cannot be the result of any coincidence except due to the fact that this “Greek” word was intentionally manufactured from the Turkish source text as I indicated above.

Claiming in any other way would be nothing but deception by way of sophistry!
It is curious that even the English word ARMORED, when rearranged letter-by-letter as “TEMOR-AR” or “TAMUR-ER”, we find that it is also a restructured and disguised form of the Turkish expression “TEMUR ER” (DEMIR ER) meaning “iron man”.

Turkish words O means “it is”, TEMUR (DEMIR) means “iron”, OZINE means “to himself / herself”, that is, “to his/her body” and TAKIŞ means “putting on, wearing”.
So again we find that this very complex looking Greek word TETHWRAKISMENOS and the English word ARMORED have actually been intentionally made up from Turkish language, in other words, they have been stolen from Turkish, contrary to all the linguistic disinformation that has been perpetrated!

The reader should also compare this with the previous “Words Under the Lens Series”-#2 where I discussed the latin term FERRAMENTUM.

Istanbul hosts Rums (Greeks who hold Turkish Citizenship) From Greece and Around the World...