Home General Articles Falcified Genocide 1909 Adana Rebellions and the Massacres of Armenians and Moslems A... 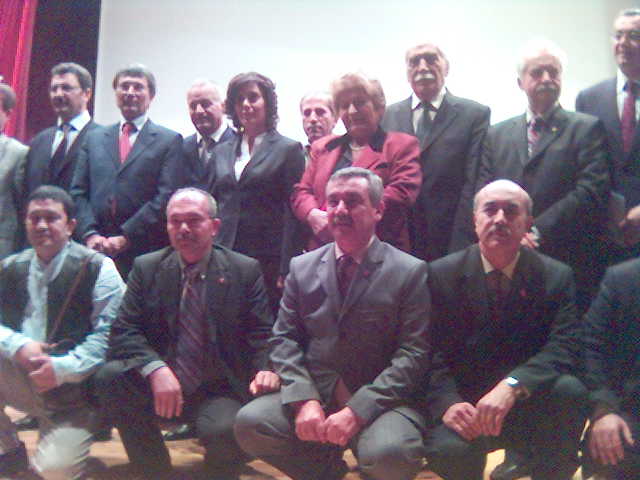 The latest conference on the 1909 Adana Rebellions and Massacres took place in Adana at the Adana Municipality Theatre centre. Many other panels, symposiums, conferences and workshops were held throughout 2009 in different countries from Erivan to Jerusalem, from London to New York and other cities. The Turkish Historical Society held a two-day Symposium in Ankara on June 26/27, 2009 with the participation of speakers with different views. Several Turkish organisations including the Gomidas Institute from London also held a workshop on November 6/7, 2009 at the Sabanci Museum in Istanbul, ” called, “Adana 1909: History, Memory and Identity from a Hundred Year Perspective.” (1) I attended the Ankara and Istanbul conferences partially and the Adana conference on Friday afternoon and Saturday morning, Dec 11/12, 2009. Below is a brief summary of the Adana Symposium.

Symposium in Adana, 1909 – The Armenian Savageness in Adana”

The Symposium, titled “The Armenian Savageness in Adana ”,  was organized by “Adana Kardes Kultur Dernekleri Toplulugu – Adana Friendship Cultural Association Group”, with the participation of its 14 members, including the Federation of Bosnia-Herzegovina Cultural Associations whose President, Fehmi Arazli, delivered the opening speech (2). Following the one minute silence in honour of the fallen martyrs over the years, the National Anthem was recited.

Sevgi Kafali, the chairman of the organizing committee, spoke next and stated that the Armenians were after lands in and around Adana and indicated her concern for lack of attention to this issue. The Governor of Adana, Ilhan Atis, thanked the organizing committee for the Symposium and commented that it might have been better to present this in Istanbul to bring the issues to the attention of a larger audience. The 5th term Mayor of Adana,  Aytac was not present and no university was represented.

Prof. Dr Mustafa Kafali, the moderator of the first-day presentations, outlined a brief summary of the Adana incidents and stated that these events did not start 100 years ago but had a 200-year history, referring to the many uprisings and revolts of Armenians throughout eastern Anatolia going back to 1830s. Then Kafali introduced the speakers, referring to both of them as his students.

Yusuf Hallacoglu, the former President of the Turkish Historical Society, presented information on the involvement of the Russians going back to 1816 and the Russia – Iran war of 1828. and his years of research in the archives of many countries, including Russia and his payments to obtain documents. Halacoglu also made reference to the presence of Missionary school across Anatolia which grew from 17 in 1845 to well over 1,244 with over 73,000 students in 1900, including around 430 by the American Board of Commissioners for Foreign Missions (ABCFM). During this time, the total number of Ottoman schools were around 650 with 35,000 students. Halacoglu stated that almost all of the students at missionary schools were from the minorities and many went to Europe and the United States, and many returning to Turkey with nationalistic ideas.

Prof Cicek, who was in the US recently delivering presentations on the Armenian issue in New York and Washington DC , first commented on the lack of interest in the Symposium and stated that it is difficult to talk to people of Adana about Adana, adding that it is more difficult to explain the events of 1909 to non-Turks.

Cicek first mentioned that the population of Adana in 1909 was around 55,000, including 20,000 Armenians and questioned the number of Armenian deaths given during the Istanbul workshop as 30,000. Cicek also commented on the statements made by Cemal Pasa, who was a colonel at the time and appointed as the Governor of Adana after the incidents and held a court hearing with the members of the French, British and Italians and declared that 20,000 Armenians had been killed, referring to the governor as a traitor. As a result of the hearings, 48 Moslems were hanged, 2 Armenians among them. The leaders of the Armenians ArchiboshMusheg was also condemned to death who had fled Adana after organizing the rebellions and before the incidents began. Cicek gave a figure of around 6,500 killed during the incidents, including 1,500 Armenians.

Referring to the comments made on the low participation in today’s symposium as compared to the Ankara and Istanbul conferences, the writer stated that the numbers at both of these were much lower and commended who were present, perhaps more than 200. A comparison of the findings presented during the Istanbul and today’s conference was also made, asking how these could be made available to the west who believe in the distorted views. Both Mustafa Kafali and Halacoglu provided responses, Halacoglu even stating that he does not care if the US Presidents recognize the Armenian genocide, which was a surprise to this writer. Then why all the efforts to convince the US presidents otherwise?

Following the opening remarks by the moderator Prof. Dr Yusuf Hallacoglu, Dr Necla Gunay spoke first and made a presentation on the Zeytoon rebellions. Making reference to the Halacoglu statement that we first need to look at the causes of the incidents, Gunay presented a history of the Armenian settlements in and around Maras going back to the 8th century AD and many rebellions that took place in the region. She also spoke about the activities of the missionaries in Maras and showed the photographs of American and British schools housed in imposing buildings, stating that with the purpose in a way to remind the Turks that they are there. Gunay stated that there were over 50 uprisings in and around Maras, Armenians demanding autonomy, similar to autonomy given to Lebanon in 1861.

Dr. Kemal Cicek stated that much information had already been presented on the 1909 Adana incidents and that he would speak about several issues that were not mentioned. He spoke about the impact of the 1876 Birinci Mesrutiyet (Constitutional Monarchy) and the 1908 Second Mesrutiyet which gave all the people the right to bear arms which allowed the Armenians to buy rifles and ammunition, mostly from the British and the French. The aim of the Armenians was to resurrect the old Kingdom of Armenia in Cilicia.

The last speaker, Arslan Bulut, spoke mainly on the theme that the West’s ultimate aim for the past 200 years has been to make Turkey a Christian land and Turks Christians which was the goal of the missionaries but was not successful. Bulut made references to the American missionaries who first arrived in Turkey on 15 January 1820 as the representatives of the ABCFM who instructed the missionaries Pliny Fisk and Levi Parsons in 1 December 1833, “This holy and promised land will be taken back through a new Crusades without armed struggle.”

Evaluation of the Presentations and Question and Answer Session

Only one person was allowed to ask a question due to lack of time, according to Halacoglu, although the conference was scheduled until 2:00 PM and it was only 12:00 noon. Dr Necat Yaycioglu stated that he wanted to comment about a book that was related to the Adana incidents written by a missionary, Rose Lambert in 1911. The book, “Hadjin and the Armenian Massacres,” tells the story of a group of people from Hadjin (Saimbeyli) travelling to Adana on the eve of April 13 before the incidents started and the killing of 74 priests. Yayciaoglu does not believe in the story and conducts research, finding out that there were only 3 churches in Hadjin and 3 priests, and only one of them had been killed. Unfortunately, many books have been written with fabricated stories which prove the statement made by Bruce Fein of TCA in his recent article, “Lies, Damn Lies and the Armenian Deaths.”

Commentary on the 1909 Adana Incidents

One hundred years ago, terrible things happened in and around Adana, which is controversial as to the origins and the responsibilities. The year 1909 was a good year across the United States where an International Fair was held in Seattle, promising cooperation among the nations around the world and the people of the Americas. William Howard Taft was the U.S. President. The Ottoman government had participated in the earlier US International fair held in Chicago in 1895 where Turks were introduced for the first time in the international arena. The Empire was tranquil following the declaration of the Second Mesrutiyet in 1908 by Sultan Abdulhamit. The Ottoman government was projecting a good image of a country with new democratic principles and freedom to all of its people with different backgrounds.

As the new year 1909 arrived, there were no real problems in Turkey with the minorities except the Armenians, especially those living in and around Adana, known as Cilicia. They took advantage of the newly acquired freedom and wanted to resurrect the old Armenian Kingdom of Cilicia. Armenians were also being used by some of the Western powers to further their own interests and weaken the Ottoman Empire, and in fact to partition it.

The Armenians first began to purchase huge tracks of land around Adana. With the new right-to-own freedom to bear arms, started buying huge amounts of rifles and ammunition. Their leader, Musheg, told Armenians to get ready for the day that they would revolt against the Ottoman Government and establish a state where they were not in the majority.
As many historians have written and research in available archives have shown, the Armenians were used by western powers to further their own whims, at the expense of both the Turks and the Armenians.

About the name of the Etruscan King LUCIUS TARQUINIUS PRISCUS...

Book Review with Questions: Islam Without Extremes: A Muslim Case for...