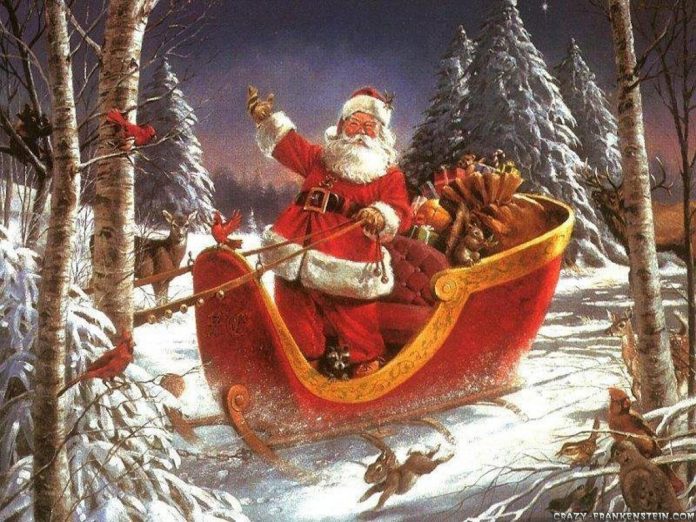 In 1897, 8 years old girl named Virginia O’Hanlon wrote a letter to the Editorial writer Francis P. Church of the New York Sun, asking him if there was really a Santa Claus. Church’s reply, “Yes Virginia, there is a Santa Claus” became a classic. He went on to say that it does not matter whether today Santa Claus exists physically; rather his spiritual existence is more powerful and prevailing. He inspires faith, love, joy, hope and poetry to the whole of humanity which is more enduring.

Not many people are aware that there was really a Santa Claus, his given name was Nicholas, and he did live in the 4th century in Asia Minor what is today modern Turkey. Like many of the landmarks of early Christianity, his tomb, his church and the city of Myra (Demre in Turkish) which was the seat of his Bishopric still stand intact.

In the pre-Christian era, Myra was a pagan city. Hellenic tribes who lived in the surrounding mountains built a temple there where they worshipped and made a sacrifice to Artemis and Apollo. That temple was destroyed in an earthquake in the second century A.D. St. Paul visited Myra during his journey to Rome. According to the legend Nicholas was born in a town called Patara (today Gelemis), which was an important port city in the ancient times. It was not too far from Myra. Patara became completely silted up later. It was visited by St. Paul on his third journey. Both towns are situated where the Aegean Sea meets the Mediterranean on the southern coast of Turkey.

Nicholas was the son of wealthy parents who died young. With the money, he had inherited he made a practice of giving secretly to the poor. He believed that giving joy and hope, not just the material necessities, was equally important.

The second half of the 3rd century and the fourth century were an important time for this region. In 284 A.D. the Roman Emperor Diocletian mounted the throne. He was a devout pagan; he made Nicomedia (today’s Izmit) his capital. He began to regard the Christians with suspicion, and then with dread; they were increasing in numbers and growing in influence. He harassed and persecuted the Christians. The period between 297-311 A.D. is known as ”Great persecution.”   To save their lives the Christians flocked to Cappadocia, (today “Urgup”, a town in central Turkey), to hide from the Romans, they hewed the rocks, and carved abodes for themselves, which is still in existence today.

Nicholas became a Christian and went to Jerusalem on pilgrimage. On his return, he went to Myra. The Christians had built a church on the site of a ruined temple. He walked into this church to pray, but as soon as he opened the door whole congregation stood and started to cheer. It was later explained to him that while deliberating the fate of their church, the priest heard a voice telling him to choose the first man who enters the church the next morning as their bishop, “And you are that man!” Thus Nicholas became the bishop of Myra. His popularity spread beyond the range of his small village, and naturally drew the wrath of the Byzantine emperor Diocletian who put him in jail and had him tortured.

After Nicholas died in 323 he was buried in an elaborate sarcophagus that the priests periodically filled with fragrant oil. The oil dripped through cavities in the sarcophagus, and the priests did a lucrative business selling vials of it to pilgrims.
Maybe for that reason, he has been all along associated with commercialism.

In 1071 the Turks entered Asia Minor, defeating the Byzantine Empire. This alarmed the West which feared that this new well-organized state of an alien faith might one day draw a wedge between the West and the Holy Land. In 1087 some adventurers from Bari in Italy, and some early forerunners of the Crusaders came ashore at Myra, broke into the church of St. Nicholas, opened his tomb and stole part of his remains. They took them to Bari and built a basilica in his memory. His broken tomb and the rest of his remains are still in Myra.

The early Dutch settlers introduced St. Nicholas to the United States, calling him “San Nicholaas”, which later became Santa Claus. In the 19th century Czar Nicholas I of Russia, determined to resurrect the memory of his namesake, he commissioned an expedition that succeeded in locating and excavating what had remained of it, including mosaic floors, several fading frescoes and the holy sarcophagus.

In the 1950s local Turkish businessmen thought that the legend of Santa Claus might be Demre’s ticket to its worldwide recognition. The Turkish government issued a stamp in his honour and sponsored conferences to honour his memory.

In 1981 a statue of him, looking remarkably like the popular image of Santa was erected in front of his church.

When Turkey launched a “Faith Tourism” campaign it included Santa Claus in its itinerary. This irked some Christians, who blame Turkey, a Muslim nation, for trying to capitalize on materialistic rewards by exploiting a Christian saint. The Turks responded to this by saying that Santa Claus is supra religious, a universal phenomenon; to relegate him to the parochial confines of one religion diminishes his status. He is more than a saint, he touches everybody’s heart. He belongs to everyone who can identify with his spirit.