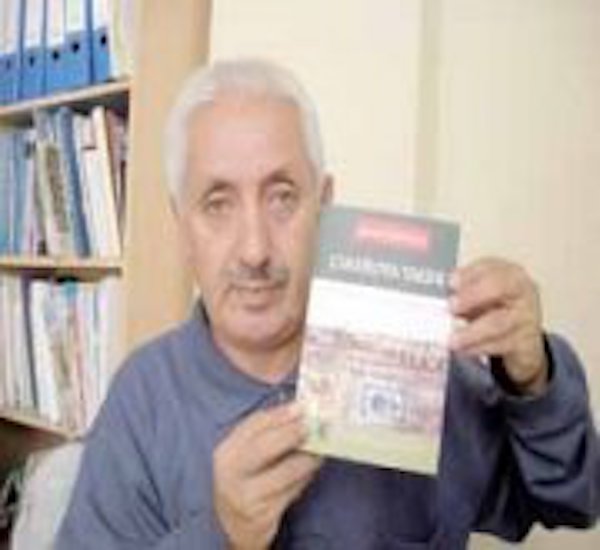 The book, first introduced during the October 2009 Book Fair in Istanbul, is new on the Armenian issue by a Turkish researcher and writer, assisted by his daughter Tomris. I started reading the book during the first leg of a month-long Train tour of Turkey that started on December 17, 2009, in Ankara. It is a very long book, in Turkish, and 584 pages. It covers the Ottoman period from the 1820s to 1923. The author, who also attended the   Adana 1909 Symposium in Adana on December 5, stated that the book was referred to by several organisations as the most comprehensive book on the Armenian issue.

The book opens with a commentary on “Tarih Bilinci – The Conscious of History”, followed by 39 chapters (although not numbered) on subjects related to different subjects and the many aspects of the Armenian issue. The next 4 chapters present some aspects of the Armenian History and the arrival of Turks in Anatolia and the Armenian resistance. Chapter 5 presents a summary of Turkish – Armenian relations and Chapter 6 describes the events in the Middle East to which the author refers to as the Centre of the Issue (Arzin Merkezi), where the pot has been boiling for the past 4,000 years. The author describes the impact of the three major religions that are based on the teachings of  Prophet Abraham (Hz. Ibrahim), the aims of the Christians and Jews in the region and now the presence of United States primarily to control the flow of oil to the world markets.

Chapter 7 covers the accusations against the Turks on genocide issue and describes the 79 Armenian documents that were sent to Vienna in 2005 when a dialogue was to have started. The Armenian issue is discussed in Chapter 8 and Chapters 9 through 19 presents information on the relations between Armenia and various countries, with many repetitions and references to the “ White Man. ” USA-Armenia relations is covered in Chapter 19, which is the most important aspect of the Armenian issue.

The following two statements are in the preface to Chapter 19:

“There are two nations in the world that I would like to see vanish from the face of the earth: The Spanish people and the Turks.” US President Wilson.

“The cultural and ideological foundation for the Armenian issue was established by the USA and the political and military help was provided by Russia, England and France .”

The author refers to the writings of American Sydney Whitman who claims that the prejudice about Turks in the USA was due to the dissemination of one-sided stories about the events that took place in Turkey both before and after the First World War. There are also references to three books by missionaries published in the USA in 1896   one by A Williams, “The Bleeding Armenia”, another by Edwin Bliss “Turkey and the Armenian Savageness”, and by Frederic Greene, “Armenian Massacres and the Mohammedan Sword.”

Chapter 20, “”The German Expansion Bagdat Railroad (7 B Formula))  – Alman Yayilmaciligi Bagdat Demiryolu (7 B Formula)” briefly presents a summary of developments in Germany following the 1915 Vienna Conference when 360 individual states formed 36 separate kingdoms and Bismark becomes the Prime Minister of Prussia. Since I was travelling on a train, I read Chapter 20 next..

The chapter gives interesting information on the development of railroads, stating that the first railroad was built in England in 1825. The Ottomans were introduced to the railroad with the establishment of the Izmir – Aydin – Turgutlu line by the British in 1856 (2). This was followed by the Adana – Mersin line in 1877, also by the British. Then, the story of the famous Berlin – Bagdat railroad is told which was built by the German company and financed by Deutsche Bank (still active today). The book states that the main purpose of the railroad was to establish German Influence in Anatolia and in the long run, take over the country.

One of the most important landmarks on the Bagdat railroad is the Hacikiri Bridge’ also known as “Vardiha Koprusu” which the author refers to as ” The German Railroad Bridge”, something new.  The author further states that the bridge symbolizes Imperialism, German Expansion and the symbol and also the reason for World War I, which actually applies to the entire railroad and not this bridge, which is a work of art and masterful engineering (Butun Dunya 2008)

Chapters 21 through 33 presents information on the many aspects of the Armenian issue and the re-location of Armenians from the eastern Anatolia.

Chapter 34, Books that are source for the so-called Genocide, lists six major works that form the foundation of the Armenian claims. These are:

Comments on the above chapters will be covered in Part II of the review of the book.

This is a useful book but it would be helpful to a number and expand the Table of Contents with sub-headings and the addition of an Index. After going through the book and looking at the 3 photographs, the only ones in the entire book, two from the 1909 Adana incidents which is not covered in detail, and the burning of a black American in the 1920s, I noticed that two books by Sukru Aya, “The Genocide of Truth” in English and the shorter English version of the same book, “Soykirim Tacirleri” are not mentioned. Although the title of the book refers to 2015, there is no reference as what may happen in the 100th anniversary of the alleged Armenian genocide.