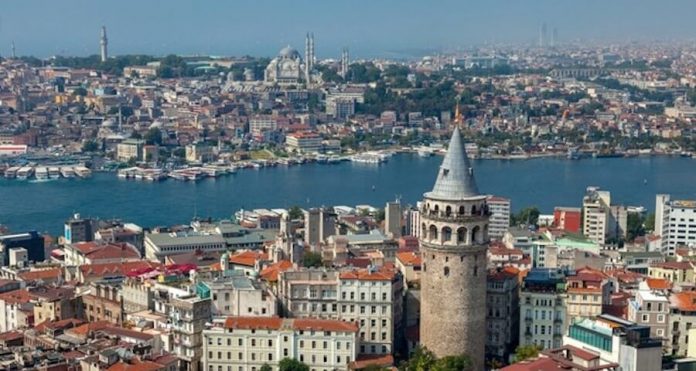 Two large posters above the Hilton Conference Hall in Istanbul simply stated ‘’Meeting Istanbul: Present and Future.’’ Only once inside, one knew that the conference was about the ‘’Rums of Istanbul. (The Redhouse dictionary gives – Greeks who hold Turkish citizenship as the meaning of Rum, which also means Roum, Anatolia, Byzantine).

The various unions and federations from Greece and other countries representing ethnic Greeks of Istanbul were gathering here over the weekend for the first time in their ancestral home. The conference was organized by the ‘’Zografyan High School Graduates Association’’ in Istanbul with the support of Istanbul Mayor Kadir Topbas and Greek Patriarch Bartholomeos. The purpose was declared to be ‘’to help those who were forced to leave Istanbul to consider coming back, either to live here or to baptize their children.’’

The opening speech was delivered by the Undersecretary of Greek Foreign Affairs Teodoros Kassimis, followed by statements by Fener Rum Patriarch Barthelomos, who stated that they are neither visitors nor foreigners, rather actual residents of Istanbul. He also claimed that he was the spiritual leader of all the Orthodox believers around the world (over 300 million) and that his title was Ecumenical. During the two day conference, many representatives spoke, including several Turkish academics and researchers, such as Prof. Halil Berktay, Mete Tuncay and Adnan Eksigil and Greek author Yorgo Istefanopulos. Among many interesting comments that Mete Tuncay made was a quote from the historian Halil Inalcik, ‘’The Ottoman Empire was not Turkish.’’

One of the speakers lamented that there were many Rums of Istanbul living in Athens, but that their children did not know Istanbul. Another speaker recommended that they should all obtain Turkish citizenship and either visit Istanbul regularly or take up residency, with a far fetched proposal to the Greek Government for payment to the newlyweds to make 3 or 4 children so that the Greek population would grow. Maria Bacht, who left Istanbul when she was 14 and now lives in Germany, stated that her ultimate goal was to move to Istanbul and live here the rest of her life.

Organizers estimated that more than 2,500 people attended the conference sessions, with 500 registered, 80% from Greece. However, there were no Turkish or Greek flags in the conference hall (protested by former Turkish residents of northern Greece) although the organizers were from a school in Istanbul and the official representatives of the Greek government were also present.

A concert was held at the end of the conference on Sunday which was attended by Patriarch Vartholomeos, Greek Deputy Foreign Minister Theodoros Kassimis, Greece’s ambassador to Turkey George Gennimates and the consul general in Istanbul, Alexis Alexandris.
There was also a bookstand where many were on sale, including ‘’When Patriarch was a Child’’ by Patriarch Bartholomeos’’, his childhood memoirs in Turkish and the daily publication of the Rums of Istanbul, ‘’Apoyevmatini – The Afternoon ’’, in circulation since 1924, according to Leyla Tavsanoglu of Cumhuriyet who interviewed its publisher Mihail Vasiliadis.

It is interesting that the conference was called ‘‘’Meeting Istanbul: Present and Future’’, there were many references to the past, although they must know very well that it is hard for them to turn the clock back. They should pursue happiness in their adopted countries and be good citizens. Perhaps, some Armenians can learn something from their Rum friends and talk and write about ‘’the present and the future’’ of the Armenian relations, instead of constantly rehashing the ‘’Tall Armenian Tale’’, as Mr Holdwater characterized their futile effort.