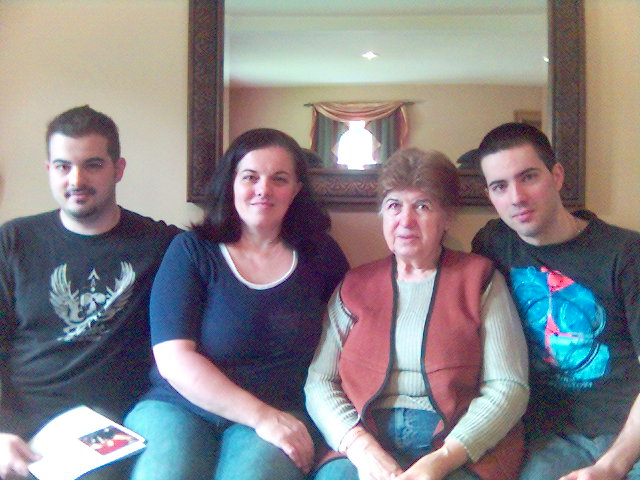 A restaurant with Turkish cuisine has been serving the Port Murray residents and visitors from the surrounding areas in Warren County and far away places since 2010. Called the Cassia Grill, (reminiscence of Akasya in Turkish), the restaurant is run by two brothers, Tinaz and Bora, their mother Goksel Aras, and grandmother(Photograph). Their family owned a restaurant in Turkey for 10 years and decided to bring their skills to the skylands of northern New Jersey, a beautiful place not too far from the Delaware River and Pennsylvania (1).

In front is a modern espresso bar (made famous by the Italian restaurants and Starbucks) serving Turkish Coffee, Macchiato and Cappuccinos, and Salep, warm milk made with dried flowers and cinnamon. The room has seating for around 45 people and allows the patrons to bring their own wine, like many restaurants in the area. The homemade baklava that they served me during my visit there today was excellent.

Warren County is one of 17 counties that make up the Garden State of New Jersey and has 22 Municipalities, including Washington Township, where we live and which surrounds the Washington Borough, one of many towns across America named after the first President of the United States.

The web page of Warren County states that it came into existence in 1825 when an act of the New Jersey Legislature, passed on Nov. 20, 1824, took effect and separated the area from Sussex County. The county was named in honour of Dr. Joseph Warren who, although he had no known association with the area, earned a heroic reputation throughout the original 13 states for his devotion to the revolutionary cause, which led to his death in the battle of Bunker Hill. During the Revolutionary War, a large majority of the 13,000 colonists who lived in Sussex (and what is now Warren) supported the patriotic cause. Sussex was among three New Jersey counties commended by the Provincial Congress in 1775 for “spirited exertions” in raising minutemen for the fight for independence.

The county originally had the townships of Greenwich, Hardwick, Independence, Knowlton, Mansfield, Oxford and Pahaquarry, from which the present 22 municipalities were carved. The Town of Belvidere was chosen as the county seat, a decision that was considerably influenced by the action of General Garrett D. Wall, who donated grounds for a county courthouse and public square in Belvidere.

The Sardinian Capital City NORA and Sardinian Kinship With the Phoenicians (GÜNHANS) (Part-...