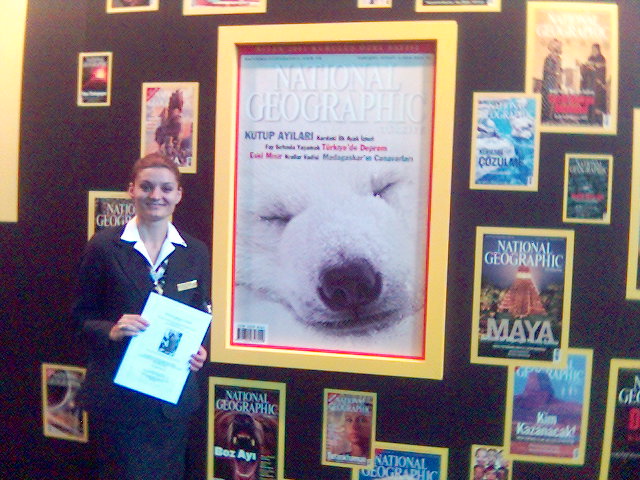 The National Geographic Magazine is published by the National Geographic Society (NGS), headquartered in Washington DC in the United States, which is one of the largest non-profit scientific and educational institutions in the world. Its interests include geography, archaeology and natural sciences, for the promotion of environmental and historical conversation and the study of the world cultural history. There have been many coverages of Turkish lands and history, including an ill-fated issue on the Armenians in Turkey with a one-sided presentation of the conflict.

There are many photographs in the exhibition, many dating back to the early 1920s, including one titled, “Istanbul Cocuklari – Children of Istanbul”, wearing worn-out clothes and hats. Quite by chance, I toured the exhibition with the Customer Relations Manager of the big Costa Ship that had just pulled in for a full day visit to Istanbul (Photograph).

Wikipedia gives detailed information on the history and the present activities of National geographic which includes a channel, also shown in Turkey. The National Geographic Society began as a club for an elite group of academics and wealthy patrons interested in travel.  On January 13, 1888, 33 explorers and scientists gathered at the Cosmos Club, a private club then located in WDC, too organize “a society for the increase and diffusion of geographical knowledge.” After preparing a constitution and a plan of organization, the National Geographic Society was incorporated two weeks later on January 27. Gardiner Greene Hubbard became its first president and his son-in-law, Alexander Graham Bell, eventually succeeded him in 1897 following his death. In 1899 Bell’s son-in-law  Gilbert Hovey Grosvenor was named the first full-time editor of National Geographic Magazine and served the organization for fifty-five years (1954).  Members of the Grosvenor family, including a Robert College teacher Grosvenor, have played important roles in the organization since.

I did not see a single photograph of the magnificent  Anit Kabir – the Mosaleum, or Mustafa Kemal Ataturk, which would have been fitting since Turks everywhere are celebrating Ataturk’s birthday on May 19 as part of the Youth and Sports Day. Is it because none of the photographers had a chance to meet the founder and the first President of the Republic of Turkey or is there some kind of a restriction? The May issue of the National Geographic magazine includes a small book with all the photographs, published by the Dogus Gurubu.