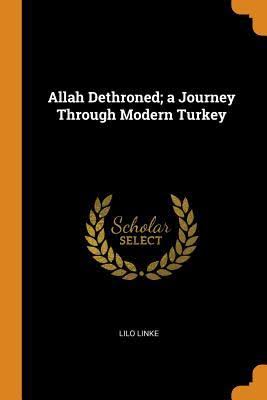 These are two different books, written 66 years apart, one by a German, the other by an American. The first one is all about Turkey, which tells like it is, but evidently read by only 12 people during the 13 years that it was in the Idaho State Library and then discarded. The second book is a reprint of Mark Twain’s classic by the Readers Digest in 1990, probably read by millions during the 140 years since its first publication.

The 9 pages that are devoted to Turkey are not so complimentary to Turks or Turkey which does not tell the real truth about the people of the Turkish Ottoman Empire in the late 19th century which the humorist did not get a chance to meet.

When the book arrived from Amazon.com last week, I was surprised to see that it was a library discard, complete with the Check-out card and dates. The book evidently belonged to the Idaho State Traveling Library in Boise, Idaho, which had Feb 13, 1938, as the first check-out date (A 915.6 Linke.)

In between the first and the last check-out date of Nov 20, 1951, a total of 12 people have read the book in 13 years, the reason why the library probably discarded it. Someone who probably paid a dollar sold it on the Amazon.com for $21.00.

I could have paid a hundred dollars since this is a beautiful book with 81 illustrations of Turkey in the 30s during Ataturk’s time and a large and folded Map of Turkey showing the author’s itinerary.

The frontispiece is a photograph of Ataturk in a formal dress, probably taken in 1935. In fact, there are around 24 copies for sale at Amazon.com, one for $115.59.

The 335-page book is presented in two parts. The first part covers the author’s travels that begins in Istanbul and ends in Hopa on the shores of “The Black Sea” near the Georgian border. In the first chapter, “Black Sea”,  the author writes that it was a mere chance which in March 1935 led her to Turkey, a country which she knew nothing about, except Istanbul, which she admits having more definite ideas about.

She travels from Marseilles to Istanbul in a steamboat following her trip from London, where she was living although she was a German citizen.

The next ten chapters tell the story of her journey to Inebolu by boat, from there by bus (kamion as she refers to) to Sivas and on to Erzurum by train. There are many stories that she tells about people she meets in villages, towns and during her bus rides. The government authorities are aware of her arrivals and make sure she gets protection wherever she goes.

At the end of each chapter, the author gives information about the cities which she visits following long and arduous travels.

Part II begins with a chapter she calls “Forward to Civilization” and tells about her stay in Hopa. Her next stop is Giresun and goes on to Samsun which at the time had a population of around 34,000.

In Samsun the author visits a “Halk Evi – The people’s House”, stating that they are open to everyone all over Turkey and praises their contribution to the development of the new Turkish nation. In the chapter “Appeal  to Youth”, she refers to the 10 Year March as the

“March of the Republic” and provides a translation:

“In ten years, we gained honours in every struggle.
In ten years we gave youth to fifteen million people of all ages.
We have connected the four corners of our country by iron roads.
We are Turks, our breast is the bronze defence line of the Republic…..”

In the next two chapters, the author tells about her travels with train, reaching Malatya which she calls, “the pearl of Euphrates.”  Chapter 7, “Journey Through the Night” begins with the news that a letter has arrived from Ankara with a rail ticket for a month, courtesy of the Turkish State Information Bureau.

Even though the ticket is for first class, she travels in the second and third compartments which takes her to Izmir and on to Ankara. During her stay in Adana, she visits the only electric power plant in the region and Tarsus American High School (p. 274).

This is a rare book that tells the story of Turkey’s development during the 30s, told in beautiful prose, including the shortcomings of a nation on a run for democracy and a better life for all of its citizens.

She forgoes a chance to interview Mustafa Kemal  Ataturk but wrote her admiration towards him. I recommend everyone to read this book and perhaps compare to what is going on all over Turkey now.

The Innocents Abroad (1869)
By Mark Twain

During our high school years at Talas and Tarsus, books by Mark Twain were among the many that we read with great joy, including Huckleberry Finn and Tom Sawyer. To many, Mark Twain was the Lincoln of the American literature, whose real name was Sam Clemens (1835-1910).

Among his wonderful travelogues are “Roughing It’’, “Following the Equator”; “Life on the Mississippi” and “The Innocents Abroad” published in 1869.

Twain was a reporter who joined the six-month expedition to Europe and the Middle East on board the steamer “Quaker City.” The pleasure tour had been organized by the famous pastor Henry Ward Beecher and Civil War General William Tecumseh Sherman (who is famous for burning Atlanta.) Neither of these notable made the trip citing other obligations.

Twain roomed with a young man from Elmira New York and after a visit to Elmira he meets his friend’s sister Olivia. She would become his wife and the mother of the couple’s three daughters.

The Innocents Abroad is a long book of 500 pages. Twain travels through Florence, Rome, London, Paris and meets Czar Alexander II in the Crimea. He tours Syria, Lebanon, Greece and Israel and spends some time in Istanbul, known as Constantinople at the time.

In Chapter 34 (pages 233 -241), Twain tells the story of his visits to a Slave-Girl Market, his confrontations with dogs in the streets, experience with nargile and indulgence in a

Turkish bath. The chapter opens with the following statement:

At the end of the chapter, Twain writes about his dislike of the Turkish coffee, stating that, “of all the unchristian beverages that ever passed my lips, Turkish coffee is the worst.” Now, even Starbucks sells Turkish coffee.

This is an interesting book with a lot of funny episodes but certainly not in praise of a country which he saw only a part of, Turkey.