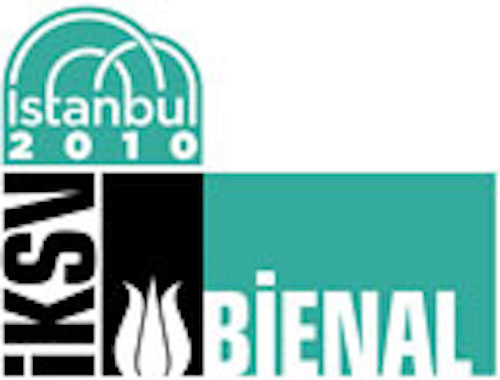 The 11th International Art festival opened its doors on September 12 which will last until November 4, 2009. The exhibitions are presented at the Antrepo 3 in Karakoy, Tobacco Warehouse in Tophane and the old Greek High School in Ferikoy.

There were all kinds of receptions at various places, including the opening ceremony at Antrepo 3, where over 2,500 participants and guests welcomed the event, a prelude to the 2010 Istanbul Culture Capital of Europe activities that will start in January 2010.

The guest curator for the biennial is a group of four young women from Zagreb, Croatia, What, How and for Whom, WHW. The theme of the festival is, “What Keeps Mankind Alive?”, selected from a song in Bertolt Brecht’s “Threepenny Opera”.

Huge advertisement posters can be seen all over Istanbul inviting the locals and visitors to an art fair which includes 70 artists from 40 countries, including 9 from Turkey. The number of events, works and installations are reported to be 141. The youngest of the artists is 27 and the oldest 76, and according to one of the young volunteer guides, 5 are deceased.

The budget is reported to be close to five million TL which has been provided from various organisations, including the European Culture Capital Agency, Ministry of Culture and Tourism and Prime Ministry of Promotion. A 370-page Catalogue with information on all aspects of the Biennial is expected to provide some funds as well. There is an entrance fee including a flat rate for multiple visits during the duration of the Biennial.

The 11th Biennial is somewhat different from the previous ones with its emphasis on issues that everyone has to deal on a daily basis and the participation of many artists from the Middle Eastern and South European countries with a few from the United States.

There are several from Israel as well with works of a controversial nature such as the one by which questions the destruction of Palestinian houses. Anna Boghigian, an artist from Cairo, has created illustrations inspired by poet Kavafis, whose family is from Istanbul. The second floor of Tobacco Warehouse is dedicated to Russian history from the 1980s on and the next floor to the exhibition of Life magazine covers manipulated to convey different messages.

One of the works exhibited is a collection of various items from the Museum of Modern Art in New York, called “Modern Art in the USA”, first shown in Berlin in 2004. Installation by a Serbian artists questions the relationship between peaceful homes and the sites of massacres during the war in Yugoslavia.

Work by the BuenosAires based art group Etcetra questions the role of media in shaping perceptions of reality, such as showing angry Palestinians in the media. The same group is exhibiting photographs and other objects depicting the work of “International Terrorist Movement” established in Buenos Aires following the visit of President Bush to Argentina. There is also an idealistic representation of the Qalandia refugee camp in the yar 2087 by Palestinian artist Wafa Hourani.

An interesting video by Erkan Ozgen called “Origin” features a group of black men without uniforms, walking military-style, chanting, “How happy is who can call himself a Turk – Ne Mutlu Turkum Diyene”, obviously portraying Kurds.

One of the volunteers told me that over 50,000 attended the 2005 Biennial and over 100,000 the 2007 Biennial. This year, they are expecting over 150,000, mostly foreign visitors as locals have not been showing much interest in the exhibitions.

In parallel with the Biennial, many exhibitions are presented at various galleries in Istanbul and in fact one in Diyarbakir, according to a newspaper article. One of these is the “Exhibition of my Exhibitions” by Sarkis, born in Turkey who lives in Paris whose main motto seems to say, “Leave something from you.” Another exhibition is by Aret Gicir called “Yerevan” shown at the Tokatliyan Han. There is also an interesting exhibition at Galeri Apel at the Apelian Han and another one at Galeri Elipsis, 37 photographs taken by Serkan Taycan during his many trips Anatolia.

After a full day of visits to the Biennial sites and various galleries, I stopped at Ara Café near the Galatasaray Lisesi. Ara Guler, the most famous photographer in turkey, was there with a number of visitors. “They are also from the States,” he told me and when I mentioned to him about the Biennial and the photography exhibitions, his only comment was, “Baloney.” Ara Guler is celebrating his 81st birthday this year and is not an easy man to convince.