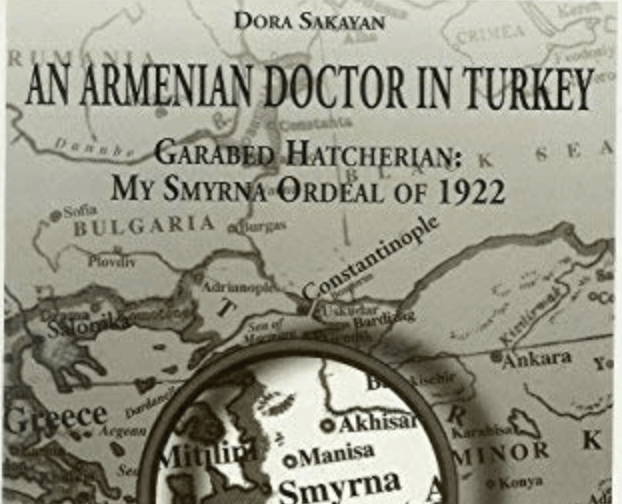 This is yet another book by the grandson of an Ottoman-Armenian, Dora Sakayan, born in Selanik in 1931, who has been living in Montreal since 1975. While going through his granfather Dr. Garabet Haceryan’s belongings in 1992, Sakayan comes accross a diary, kept by his grandfather in 1922 (70 years later). He publishes the diary in Armenian in 1995, than in English in 1997, followed by Spanish, French and Greek editions. The diary supposedly tells the story of his grandfather’s 15 days between Sept 9-24, 1922, when they face hardship following the victorious entry of the Turkish army to Izmir.

The grandfather claims that the great Izmir fire was started by the Turkish soldiers on September 13 in the Armenian quarters following the liberation of Izmir from the Greek occupiers on Sept 9, 1922. This, of course, has been proven to be a lie by many researchers, including Prof. Dr. Turkkaya Ataov, just like many other fabrications by some Armenians, such as the Hitler statement.

The book states that Dr. Garabet Haceryan was born in 1876 in Bardizag, now known as Bahcecik, one of 8 villages of Izmit. The inhabitants of 5 of these villagers were Armenians, 2 were Moslems and 1 Greek. Towards the end of the 19th century, the majority of 10,500 inhabitants of Bardizag were Armenians. Garabet Haceryan goes to local Armenian Elementary school and American High school in Bardizag (The American High School building still stands, being used as a warehouse), followed by university education at Istanbul Medical School, graduating as a doctor in 1901. After working at French and Armenian hospitals in Istanbul, Haceryan is assigned as the Municipality Doctor in Bursa following his residence there for ten years. He returns to Bardizag where he gets married and has three boys and two girls. In 1914, with 1,500 youth from Bardizag , he joins the

Turkish army and serves as a military doctor during the First World War, in Istanbul, Canakkale and Izmir and receives medals for his distinguished services. He  settles in Izmir after his release from the army in 1918 at the end of the war..  Here the author states that all the Armenians of Bardizag were either massacred or relocated without ever mentioning any reason or the uprisings of the Armenians in the east.

After working at several hospitals in Izmir, the author states that Haceryan is dismissed from his position in 1922 and arrested, only because he was Armenian. The same year, Haceryan and his family manage to flee to the island of Midilli and from there, move to Selanik in 1923. Following their move to Paris in 1950 and to Argentina in 1951, he dies in Buenos Aires in 1952, at the age of 76. The author presents him as a devout Christian and a great Armenian, without ever mentioning that hewas an Ottoman citizen where he received a fine education and served as a doctor and led a comfortable life..

The book begins with the diary on 15/28 August 1922 and continues through 24 September 1922, giving details of his daily life, including his prisonment, only because he was an Armenian. In various sections, Haceryan refers to the Tuks as ‘’blood thirsty creatures’’ and to the Turkish army as ‘’Kemal and his bandits’’. He makes fun of Turks who chant for Mustafa Kemal, commenting that Mustafa Kemal was responsible for the death of thousands of Christians, never mentioning the massacres committed by the Greek army while retreating from Afyon.

Haceryan claims that in 1922, Mustafa Kemal issues an order for the arrest of all Armenian and Rum citizens as prisoners of war and that Turkish soldiers mistreat the prisoners and rape women. In referring to Sultan Abdulahamit, Haceryan blames him for the death of 300,000 Armenians, without mentioning the assasination attempts on the Sultan’s life by the Armenians and their rebellions.

The last chapter describes Haceryan’s life on the island of Midilli between 25 September 1922 and 7 April 1923. There is a long list of refernces and 35 pages of photograps.

The book, available in Turkish bookstores, must have been read by thousands in foreign countries, which gives a one sided story of an Armenian’s life in the Ottoman Empire with fabrications and distortions. The author sees no reason to provide any explanation on the events as they took place. No wonder the people in the West believe in the mythical Armenian genocide.