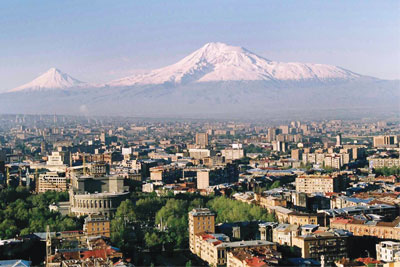 A two-page article, complete with a large photograph of Yerevan (Erivan) with Mount Agri (Ararat) in the background tells the story of a documentary on cities established in Armenia with Turkish names – Arapgir, Maras, Malatya, Van. The article, written by Alpugra Bahadir Gultekin in Radikal newspaper (July 27, 2011), states that GPOT and Can film working with Internews Armenia has produced documentaries to further the dialogue between the Turks and the Armenians.

Burak Pekgezer, an Armenian Turk and 5 other Turkish directors, has toured Armenia and produced 6 documentary films, starting in Yerevan. Burak Pekgezer’s documentary, “Nor Anadolu – New Anadolu” tells the story of three different characters and stories. The documentary opens with a panoramic photograph of Yerevan, one of the oldest cities of the world, a peer of Rome and Carthagenos in Tunisia, believed to be found in 782 BC (1). Names of some of the districts in modern Yerevan include Malatya, Maras, Antep, places where Armenians migrated from during and after the First World War.

The documentary next tells the story of Arapgir, a town of 130,00 on the other side of Yerevan, established by the immigrants from Turkey. The third story is on Musadag,  a town established by the immigrants who left Musadag in Antioch after Hatay became a part of the Republic of Turkey in 1939. Only the people of Vakifli Village at Samandag, Antakya, decided to stay which is a thriving community today, complete with their Church and orchards.

I went to Istanbul Kultur Universitesi near the airport after reading the article in Radikal which stated that the documentary “Nor Istanbul” would be shown at the university during the week. The documentary was not being shown, but I had a chance to speak with Can Yirik from the University who promised to obtain a copy for me from the producers. After discussing my purpose in wanting to see the documentary, Can Yirik gave me two books and a CD.

The first book, Armenian-Turkish Team Reporting Project includes articles produced by Armenian and Turkish Journalists as a Result of Exchange Visits, published in Yerevan in 2009, including Vercihan Ziflioglu of HDN. The second book, MerhaBarev, derived from Turkish Merhaba and Armenian Barev, includes photographs from the Armenian-Turkey joint photo project in 2006. The CD, is called Armenia-Turkey Media Border Documentary, produced by OrdFilm, with the sponsorship of USAID and Eurasia Partnership. Hopefully, these will be a part of many collections at the Turkish Library and Museum in America, scheduled to open in 2015 in New York city, for which the efforts are continuing.

During the Turkish American Leadership Conference held in WDC in April 2011, I had a chance to meet Mr Marthy Callaghan, the producer of the documentary “The Armenian Revolt” and suggest to him and the conference attendees that perhaps another documentary could be made, “The Armenian Friendship” to tell the untold stories of the friendship between the two people all over the world that could foster the dialogue, which looks like is the main purpose of the documentaries such as “New Anatolia.”

THE IMPERIALISM WORKS THROUGH THE MINORITIES – Part 2/2 – Prof....

Power, Faith and Fantasy America in the Middle East, 1776...