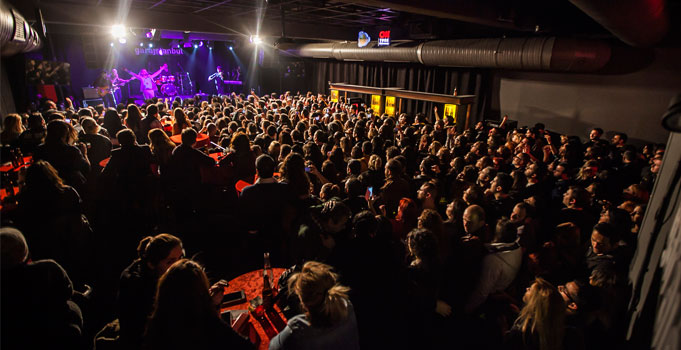 On the first day of the month of Muharrem, the first month of the Moslem Hicri year 1428 (corresponding to 2008), a play opened at GarajIstanbul, a theatre just below the Galatasaray Garaj in Beyoglu, Istanbul. Mustafa and Ovul Avkiran of  Sokak Tiyatrosu, who wrote and directed the play, took part in the play as one of the 10 characters who sang, danced and played instruments in a small dark stage illuminated by a moving lighthouse.

In the front of the stage, with only 149 seats in the theatre, two huge cloth screens presented the main message of the play, with the following, one in Turkish and the other in English:

The play opens with the sound of a drum and the performers come out from behind the curtain with chairs and their instruments in their hands. The stage is covered with big bottles filled with water and each performer finds a place among them. The main character, Mustafa Avkiran, begins to recite while his wife pounds herself, re-creating the Alevi self beating for the death of Huseyin in Kerbala.

Then Mustafa wraps a cloth around his mouth and begins his walk around the stage which continues throughout the play, changing places and at one time, his wife pouring water over his head from three bottles. He never takes off the band around his mouth.

The cast consists of 3 women and 7 men who play clarinet, drum, bass, saz and sing 25 different songs in Turkish, Kurdish, Greek, Arabic, Suryani, Zaza, Pontus, Sefardic, mostly very sad. A lady behind me cried loudly throughout the play and messages appeared on the two screens on the census beginning in 1927, which is also read out loud.

The Suryani folk song reminds the audience that people left Turkey, hoping to come back:

They left, they said they will return, but did not come back
The streets are empty, doors are closed they left
They will see, I tell you, they will come back.

In the end, the musicians lay their instruments down in front of the stage and one by one, cover their mouth with a band, except Ocul Avkiran, who speaks last. .Then the audience is treated to Asure, served by the cast members.

Observations from the Leaders of Change Summit at the Istanbul Convention...

KAZIM KARABEKIR – A Person and a Soldier Exhibition at...