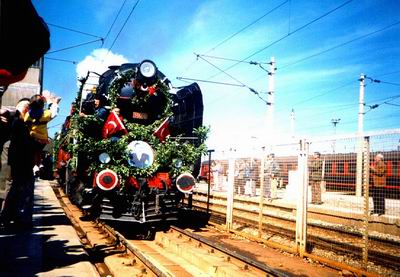 Back in 1999, TRT Children and Youth Organization organized a wonderful event commemorating the 75th Anniversary of the Turkish Republic. The train with several wagons turned into a Museum and dubbed “The Republic Train” began its long Journey on October 29 with the motto, “On Ataturk’s Path” and visited many of the towns along the route of the railway across Turkey. I missed an opportunity to visit the train which made day-long stops in different cities until it arrived in Uzunkopru near Kars on November 5.  I was visiting Kars on that day and drove to Uzunkopru to see the train and take part in the activities, from watching the beautiful folk dances and walking through the wagons and the museum filled with memorabilia of Ataturk. It was a wonderful event that I described in a previous article, “The Republic Train Tours Turkey on Ataturk’s Path”, November  10. 1999.

The grand tour of the “Freedom Train” began in Kars on July 1, 2008, after ceremonies attended by the Minister of Transportation, Director of Turkish Railways, many representatives from Hurriyet newspaper, Governor and the Mayor of Kars and government officials from cities nearby. The train will stop at 43 cities and there will be over 100 performances, concerts, presentations and exhibitions at every stop. A children’s book explaining the “Human Rights” as a story will be distributed. Canon will be publishing a book and preparing a documentary on the “Freedom Train” that will be distributed after the voyage is completed. The photographs will be taken by the students of Mimar Sinan University.

One of the most interesting exhibitions is “Will you listen to my story” prepared by the History Association, shown in one of 10 wagons behind the engine. One of the wagons is dedicated to the history of trains and train travel, presented in “Trains are wonderful” exhibition. At some locations, Hurriyet staff will meet in one of the wagons, preparing the next day’s edition of the newspaper. CNN Turk will have live coverage of events at some of the cities.

This is a wonderful event that everyone interested in trains and train rides should make an effort to be a part of. I plan to be in Karabuk on Thursday, July 24, 2008, if all goes well.