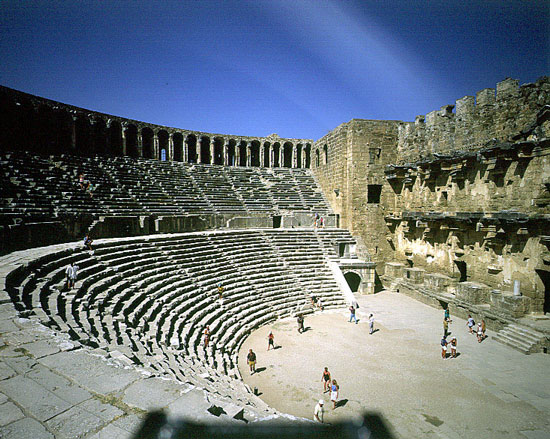 Students aged between 8 and 14 from around the world began arriving in Turkey on April 16 to take part in the greatest show on earth – the 29th International April 23 Children’s Day Festival – in Antalya. The students were greeted at the airport and taken to the homes of host families where they will stay until April 25 and head home. The groups consist of anywhere from 8 to 20 students from each country and come with several adult chaperones from schools or families. This year 1,500 students from 58 countries took part in the celebrations.

On April 17 and 18, students performed in parks in Antalya followed by a procession. On April 20, the students were taken to Ankara by buses where they met with the head of Turkish Radio and Television, the Speaker of the Parliament, the Prime Minister, President of the Republic of Turkey Ahmet Necdet Sezer at the Pink Pavillion and toured the city. Some of the students presented gifts and some spoke about the need of all countries around the world to work on PEACE.

The gala performance at the 2,000-year-old Aspendos Amphitheater began at 14:00 PM on Monday, April 23, broadcasted live from TRT 1. The master of ceremonies was Hakan, the veteran of 20 years, and Meltem, her second year. Every group wore national costumes and performed their unique dances from their countries around the world in five continents. The first group was from Venezuala, followed by Vietnam. The next group from Congo consisted of  5 male and 1 female student, performing African dance. The Bosna-Herzegovina followed and students in Turkish dresses performed a beautiful dance.

Students from India, Azarbeycan, Switzerland, Sudan was followed by a large group from the Check Republic, and Turkmenistan, also a large group that ended their performance with two students waving the Turkish and Turkmenistan flags in their hands. Moldovia also had 20 students and Afganistan group performed a beautiful dance. The Republic of Guinea had 5 students followed by 10 member group from Spain, some wearing Ottoman outfits. Following the performance by the Slovenian students, Meltem told the story of Anatolia, referring to it as the Childhood of Humanity.

It was heartwarming to see 14 students from Iraq who danced with the flag of their country under occupation in their hands and performed beautifully. There were 5 students from Angola followed by the largest group attending, 24 students from Holland, who were sent to Turkey from Holland with a ceremony at the airport that included Dutch Turks among them.

The 16 member group from Palestine danced with flags in both of their hands and was the only group that performed twice, the second dance I suppose for the memory of their Israeli cousins who participated this year also. Crimea, Autonomous Republic of Ukraine was the 28th group with 14 children who performed to the music of davul and zurna played by two young students. Next was the Romanian group of  10 girls and 10 boys who performed a beautiful Romanian folk dance.

After almost 2 hours of performances, the presenters conveyed some statistics about the festival. Countries that participated the most, some 20 times –  Russia, Turkish Republic of North Cyprus, Bulgaria, Hungary and the Check Republic, (the United States of America participated 4 times, has not participated since 1994 and not this year either .) Festival held in Ankara 16 times, Istanbul 8, Izmir 1, Ephesus 1 and Antalya 3. This year over 1,500 students from 58 countries are participating. The largest attendance before was in 2005 – 48 countries and 800 participants.

The all-girl Mexican students in their long and colourful dresses performed a beautiful Mexican dance followed by students from the Republic of Sakha of the Russian Federation.

This was followed by 18 member Serbian students. Seven-member Yemen group was all boys and performed a walking dance. The Albanian group which performed in red and black outfits was followed by Poland,  Then a group from another Russian republic, R.F. Baskurdistan performed a beautiful dance. The next was the Turkish Group from West Thrace in their typical red and white Turkish dresses.

The Serbian students performed a fast dance and 7 all male students from Yemen danced to the music of davul and zurna. The Albanian group performed in their red and black outfit, the national colours. The Polish students performed their famous polka dance followed by another group from the Russian Federation.

The Ukranian group of 12 was followed by students from Thailand who danced to mystic music, performed by 10 girls and boys. To add variety, the presenters sang a song and announced that the performance was being broadcast live in Macedonia. (Perhaps CNN is also broadcasting live some if not all of the beautiful dances.)

The group from Georgia in their all-black outfit and furry hats performed a Caucasian dance, followed by performances by students from Macedonia, Lithuania, Tajikistan, Slovakia, and Kazakistan who played two songs with violins, some as young as 6 years old, in their red and white costumes. The group of 10 male and 10 female Egyptian students in their green and purple dresses performed a lively dance followed by a fast dance by the group from Montenegro. This was followed by a group from the Russian Federation, Hungary, Kyrgyzstan and theRepublic of Tatarstan of the Russian Federation.

All girl 20 students from the People’s Republic of China danced while two male students sang with Turkish flags in their hands. This was followed by the group from Belarus (Beyaz Rustya), Croatia and Israel, all 20 dancers in different colour dresses. The folk dance group of the Turkish Radio and Television was the last to come on stage and performed several beautiful dances.

This was another incredible festival with the participation of 1,500 children from around the world who issued the following Declaration, read in Turkish by Hakan and Meltem in English:

‘’We the 1,500 children from around the world declare that this festival made us to share our culture and dances and form new friendships. Peace has been the language of us. We express our gratitude to Mustafa Kemal Ataturk who established the April 23 Children’s Day as a national holiday. We, the children of the world, will safeguard the saying of Ataturk, ‘’Peace at Home, Peace in the World’’ and will be the guardians and ambassadors of peace around the World. Festival is ending but new friendships are just beginning.’’

Thank you TRT, thank you Koc Holding and everyone who made this celebration possible. Next year Turkey will be celebrating the 30th Children’s Day Festival, hopefully with the participation of more countries, including the United States of America and Armenia.