This Editorial was written for The Turkish Times in November 1989 as a reaction to Senator Biden’s anti-Turkish remarks on the subject of the Armenian Genocide saga. The SJR@ 212 was introduced to the Congress, and it was being debated at the Senate Judiciary Committee. In that session, the then-Senator Biden displayed a crude anti-Turkish posture. Recently, as a V.P. he visited Turkey, and against the backdrop of his past stance, this visit sparked jittery comments on the internet. Although it has been about two weeks from that visit, I thought it may be useful to share this article with the community, so that we will refresh our memory about V.P. Biden’s records.

We read in the Turkish Times November 1989 issue the detail of the deliberations of the “Armenian Genocide Resolution SJR#212” in the Senate Judiciary Committee on October 11, 1989. The news item stated that the Committee Chairman Senator Joe Biden (D-Del) referred to the Turkish Nation using scornful epithets, and also he called “idiots” the 69 prominent History scholars in this country just because they repudiated the Armenian allegations, and made a public declaration in the New York Times and The Washington Post in 1985 to warn the U.S. Congress against the passage of a spurious Resolution manipulated by the Armenians to legislate a faulty history. These eminent historians constitute the main body of academia in this country in their field. Therefore, we leave it to the judgment of our readership as to who really deserves this characterization.

On October 17, 1989, A.T.A.A. protested those rude remarks with a letter and demanded an apology from Joe Biden. In our opinion, a U.S. Senator who occupies the Chair of the Judiciary Committee should be an impartial, courteous and honourable person with highest standards of character, morality and ethics. Senator Biden is arrogant with hectoring manners and shallow; in the area of sophistication, he is behind the curve.

In 1988, he decided to run for the Presidency of the U.S.A. In the primaries, the Nation had a chance for a close look into his personality and character. It did not take too long for the public to see through his opportunism, and lack of substance. He was caught red-handed plagiarizing the speech of Neil Kinnock, the leader of the Labor Party in England. He lifted several portions of a speech of Mr Kinnock without giving proper credit to the “owner”, and he passed it off as his own. In view of this shameful offence, Senator Biden had to withdraw his candidacy in disgrace from the Presidential race. Thank God for the Nation, he was found out early, and we were all spared from having an opportunist with little regard for the principles as our President.

The State of Delaware may be in a bind. Should a person apparently suffer from lack of self-esteem and without any respect for his constituents

represent the people of Delaware? Should a person who debases himself to a level of a literary thief be entrusted an honourable office? It is, therefore, an opportune time for the people of  Delaware to ponder about Senator Biden’s petty political manoeuvres for purely personal ends.

Once, an editorial in a leading paper of the Nation called Senator Biden “Ayatullah!”, because they have the same fanaticism, the same disrespect for the truth, the bigotry and the same bullish posture, which are the hallmarks of their zealotry. 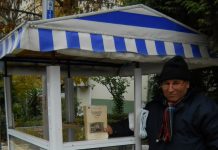 “Words Under the Lens Series”-#2: The latin word “FERRAMENTUM” sourced from Turkish.