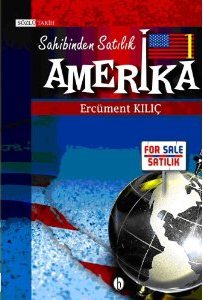 Very few books have been written over the years by the Turkish-Americans or Turks in America as compared to other ethnic groups on the Turkish experience in America. The number of Turkish-Americans is estimated to be around 300,000 although the President of “Turkish Coalition of America” gave a figure of 500,000 during a recent conference at Bahcesehir University in Istanbul on May 26, 2009. Even though Turks started coming to America in late 19th century and early 20th century, they did not establish a large community like the Greeks, Armenians, Arabs and others who also migrated from the Ottoman lands and Anatolia and many Turks returned to Turkey for various reasons, including many prominent members of the Turkish community and wrote books in their homeland (1).

In 1979, another umbrella organization was founded in Washington DC with the support of the Turkish Ambassador to the U.S. and two associations in WDC.  Its members include most of the component associations of the FTAA but also individual members, perhaps around 400, as the exact membership is not usually mentioned publicly. Therefore, this is a hybrid organization which has gone through a difficult period during the past several years but now pursuing its primary goal of promoting U.S. – Turkish relations.

ATAA is not a lobby organization, as stated in an article by President-Elect Gunay Evinch published in the Turkish Daily News last year on November 1, 2008 (2). It holds annual Conference in WDC and lately in different cities and provides support services to its members and sometimes even speaks on behalf of the entire Turkish-American community. During its 30 years of existence, many individuals served as the President of ATAA, including Ercument Kilic, who served from 2006 – 2008 (3). Last year, Ercument Kilic published a book in two volumes which basically the story of his 30 years in America and covers his term in office with very little on the formative years of ATAA and its relation with FTAA. There are hundreds of photographs covering a wide variety of subjects, but mainly those of the author taken with important people from Turkey and the U.S. including President Bush. Volume 1 is 279 pages, and Volume 2 is 312 pages, and each is sold separately (TL 22.00 and TL 26.50) although they are available at a reduced price from Amazon.com.

I read the two volumes during two long flights between New York and Istanbul in February 2009 and took notes. It was advertised on the internet and a brief review was published in Hurriyet newspaper under Oktay Eksi’s column, ‘’ABD’deki Turkiye – Turkey in the USA.’’ Aksam newspaper published a full-page interview with Ercument Kilic, complete with his photograph and Ercument’s suggestions on how to be strong in America.
Evidently, Turkish Gazette, published in America, ran an article stating that  the book would create an  earthquake in Ankara’’, which is yet to happen, as I have not heard of anyone who has even read the book, including former or present presidents of prominent Turkish-American organizations in the U.S. If I have missed anyone, my apologies. I believe the book should be read by everyone who has volunteered or has been hired to work with Turkish-American associations and those how are interested in the improvement of Turkish – American relations.

First, the book has a wealth of information on the history and the practice of lobbying in the United States and how ‘’Turks’’ still lag behind other countries in presenting a true and accurate face of Turkey.

There are 6 main sections with the first one presenting examples of real lobby activities in the U.S. In the second section, the author presents his own lobby activities in Turkey and the U.S. and under sub-section 15 makes reference to late Ahmet Ertegun, claiming that he admitted the Armenian genocide and to Senator Robert Byrd (sub-section 17) and his tireless efforts in defending Turkey in the U.S.

In Section 3, the author explains how Turkey does lobby activities and which paid U.S. Lobby organizations are used. Sub-Section 2 is devoted to the activities of Turks in America and the civil organizations, including ATAA and FTAA, mostly narrating the lack of success in many areas, referring to the annual Turkish March on Madison Avenue as a failure which the author states that it is never attended by Americans (P.148.)

In Section 4, the author explains why Turkey needs lobby activities, especially to fight the anti-Turkish media. In Section 4, dangers that face Turkey, from banking wars to Armenian issue, is described, making a note of the Armenian genocide Museum under construction which will be a tremendous headache for the Turks. Section 6 describes the shares for sale and those responsible for this in Turkey.

There are 15 Annexes, all related to the United States. There is nothing on the work of the Past Presidents of the Assembly or the Federation or individuals who have been fighting the anti-Turkish movement in the U.S. for years. No mention or photographs of the Proclamations that have been issued over the years by various Cities and States on important anniversary dates. Annexe 8 presents a list of all the Armenian organizations in the USA, but no list of the Turkish-American organizations is given.  Annexe 12 gives a list of some of the Armenian monuments around the world but there is no list of Ataturk monuments abroad. As President of ATAA, perhaps one of the things that he could have done was to make sure that at least one city in the USA has a monument dedicated to the greatest leader of the 20th century, Mustafa Kemal Ataturk. The final chapter of Volume one is devoted to Fethullah Gulen movement in the U.S. and around the world.

There is much more that can be written about this two-volume book which has its strong and weak points. Nevertheless, congratulations to Ercument Kilic for taking the time to write the book and I hope he will discuss some of his proposals in person in front of Turkish-American organizations in order to inspire them to work for Turkish causes and defend Turkey in these troubled times and perhaps write a third volume on the impact of President Obama on Turkish-American relations.