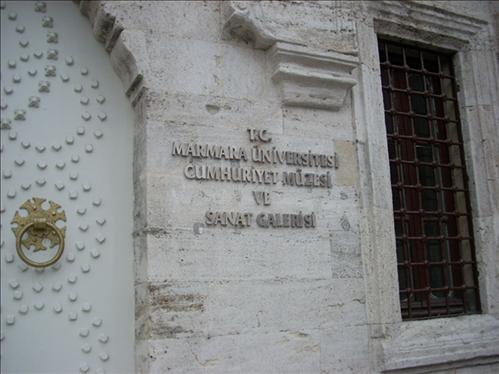 A new museum was opened at the Marmara University in Sultanahmet last month. Taking advantage of the week-long ’’Feast of the Sacrifice’’ holiday, I went to visit the Museum on Sunday, December 7 when the streets and the avenues of Istanbul were almost empty. As I was walking to the main gate of the University, three young students came over and asked me where the Sultan Ahmet Fountain was. I told them that it was just in front of the Topkapı Museum, but suggested that they first visit the Cumhuriyet Muzesi. They said fine and stayed with me as I was looking for the bell. They told me that they were visiting from Artvin, a beautiful town in northeast Turkey. I asked them if the Deriner HES (hydroelectric power plant), under construction for over twelve years, had been completed. They said that the construction was still on with no end in sight for completion.

The Rectorate building was closed but there was a note on the doorbell giving the telephone number of the guard. The three students left and as soon as I called the number,  the guard came running from the store. He first apologized for being away, stating that he had to buy food for the cat that has made the entrance of the building her home and second, for the Museum being closed, to be opened after the holidays. I told the guard, Sukru, that I was in Istanbul for a short period and after watching the inauguration of the Museum exhibition on TV, I really wanted to see the museum. After commenting that there were TV cameras and that he might get into trouble, he opened the door to the Rectorate.

The floors at the entrance level seemed to have been re-tiled with marble and new walls installed where the paintings were on display. There was also a large panel describing the creation of the Museum which has been initiated by Prof. Dr Husamettin Kocan, the former dean of Fine Arts Department of Marmara University, and carried on by the former Rector Omer Faruk Batın and now the new Rector Prof. Nejla Pur. The official name of the museum was started as ‘’Marmara University Cumhuriyet Muzesi ve Sanat Galerisi.’’ Evidently, the initial effort to open a museum at a state university was started back in 1972 by Professor Mustafa Aslıer during the preparations for the 50th Anniversary of the Turkish Republic.

The current exhibition is called ‘’Original Baski Collection’’ with reference to displays at the Baski Museum near Bayburt, created by Prof. Dr. Husamettin Kocan. Works of Mustafa Aslıer, Aliye Berger, Abidin Dino are among the paintings by 85 artists in honour of the 85th anniversary of the Turkish Republic. There is also another exhibition of Husamettin Kocan’s works called ‘’Gone to Eternity.’’

Many new museums are being established in different cities across Turkey which may bring the number of state and private museums to over 300. This, of course, is a very small number when one considers Anatolia is the cradle of civilisations with over 10,000-year history. The United States of America, established in 1776, has over 17,500 Museums. This is followed by 6,500 in Germany, 3,790 in Italy, 2,400 in Austria, 2,000 in Brasil and so on.

Another Museum opened last year is the ‘’Toy Museum’’ in Goztepe, Kadikoy, the first and the only one of its kind. Museums are fun places to see, especially during the holidays.

Open Letter To: President Barack Obama – On the “Armenian Resolutions”, “Discriminations” and the...