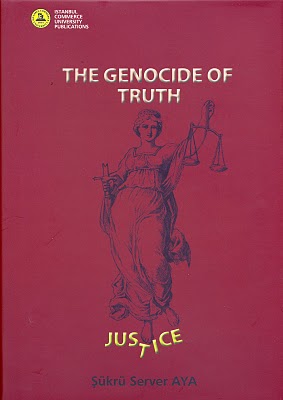 Armenian genocide is a controversial issue and also a fabrication by many Armenians and their supporters who benefit from it according to those who have studied the events of the end of 19th and the beginning of 20th century with an open mind and without prejudice. Through the efforts of selfish Armenians, the issue has been carried to the legislative organs of 19 countries and 41 states in America, passing Resolutions declaring April 24 as the genocide day. Articles, books, commentaries which support the Armenian claims number in the hundreds of thousands, mostly based on a few books written by Ambassadors and Missionaries as war propaganda and the survivors of the relocation and immigrants to foreign countries. Very few books have been written by Turks and their supporters that show the Armenian genocide is a myth, as best described in a book by Austrian historian, Erich Feigel, “A Myth of Terror” and other books listed below (1).

On April 14, a new book was introduced to the media (very few attended) and the public which responds to the allegations of the supporters of the Armenian genocide. The 700-page book, “Genocide of Truth”, is the result of over 4 years of extensive research and study by an ordinary Turkish citizen aged 78, who happens to believe that the allegations are injustice and insult to Turkey and Turks everywhere.

The book is a compilation of information from a multitude of foreign sources, grouped under 30 headings, in order to shed light to certain arguments and thesis. It begins with an Introduction and Chapter 1, “Historical Background”, and ends with Chapter 30, “Status Quo and Conclusive Remarks. There is a long list of Bibliography and a Selected Index and over 400 notes at the end of each chapter which shed further light on the subjects presented. It is a valuable source for anyone interested in solving this number one foreign policy issue of Turkey.

It is not easy to read the massive work in a few days or weeks, which is unique in its presentation with frequent quotations from interesting people that shed light to the subject matter. As the author states in the introduction, the purpose of the book is “neither to acquit the Ottoman Administration from the responsibilities of a generally badly managed deportation or relocation process, nor to degrade the Armenian people as a race or nationality.”

The first four chapters give the background on the Turkish – Armenian relations and the groundwork established by the Armenians to create a state on the eastern part of Turkey where they were never the majority through revolts and uprisings which resulted in the massacre of Muslims and Turks.

The subject covered in Chapter 5, Marvelous Missionaries, is very important, since the American High Schools founded by Protestant missionaries are where I was educated before heading to the United States to attend university. Therefore I would like to present the review of the book in several parts, beginning with this chapter. There has been many commentaries and articles over the years on the role of the missionaries in the creation of the Armenian issue, which is very sensitive and their involvements is not known by the public widely. As a frequent contributor to the study of this issue, I received the following comment from one of my former American teachers:

“We agree that all of us – including Christian missionaries to the Ottoman Empire and Turkey – need to acknowledge that wrongs were done to all sides during the early 20th century. We need to ask forgiveness of each other. Then we need to find ways to be friends. None of these is an easy step; the hurts are real, even if some of the cause may be dubious. For us, the greatest reason for friendship and healing is that the alternative is grossly destructive. “

The chapter begins with information on the founding of Missionary Societies in London with the mission of instructing Christians of the Arab East as to what being Christian meant, evidently prompting Edgar Allan Poe to state, “The pioneers and missionaries of religion have been the real cause of more trouble and war than all other classes of mankind.” (P. 57) The first missionary societies in the USA were founded in 1810 which led to the arrival of missionaries in Izmir in 1819 and the opening of a mission in Bursa in 1834. The book tells the story of their expansion in the Ottoman lands and opening of missionary schools in Harput in 1876 as “Armenian College” , later renamed as “Euphrates College.” The Tarsus American High School was established in 1888 and Talas American High School in 1889.

A book by Dr. Uygur Kocabasoglu, “America in Anatolia – the Missionary Schools in the 19th Century Ottoman Empire, Based on Documents,” is a good source of information on the activities of the missionary schools. Another book by a former teacher at American High School Frank Andrews Stone, “Academies for Anatolia”, presents a study of the Rationale, Program and Impact of the Educational Institutions Sponsored by the American Board in Turkey: 1830 – 2005. However, neither one of these books are referenced or included in the Bibliography.

Chapter 16, “Propaganda Fabrications,” is also very important as it presents information on the role of several early publications which are being used over and over again by authors, academicians and students to deceive the unsuspecting readers around the world.

The chapter begins with an analysis of the book supposedly written by the US  Ambassador to Turkey Henry Morgenthau (1913 – 1915) and based on his diaries, published in the US in 1918. The author tells the story behind this book by referring to a study of Prof. Heath Lowry who has shown that the book did not reflect the true events of the time. Ambassador Morgenthau’s book, also available in Turkish translation, was ghostwritten for him by Burton Hendrick with input from his Armenian secretary and Armenian translator, with the purpose of bringing the US into war against the Ottoman Empire. The sections below are directly from ”The Murder of a Nation”, a chapter from the book ”Ambassador Morgenthau’s Story”, published as a separate book by the Armenian Benevolent Association, full of slanders against the Ottoman Turks and many fabricated and distorted facts:
1. p. 51. ”Perhaps the one event in history that most resembles the Armenian deportations was the expulsion of the Jews from Spain by Ferdinand and Isabella. According to Prescott 160,000 were uprooted from their homes and scattered broadcast over Africa and Europe.
The Ambassador conveniently omits the fact that it was the Ottoman Turks who saved the Spanish Jews and sent ships to bring them to the Ottoman lands and settled them in Istanbul, Selanik, Bursa and other cities.

The Ambassador continues on the same page :

Yet all these previous persecutions seem almost trivial when we compare them with the Armenian sufferings, in which at least 600,000 people were destroyed and perhaps as many as 1,000,000.

As mentioned in many references, the Ambassador Morgenthau never ventured from the environs of Istanbul and did not witness anything, as many others and Samantha Power claim in her book. And yet the HR 106 voted by the US House Foreign Affairs Committee mentions that 2,000,000 Armenians were deported and 1,500,000 Armenian were killed, among many other distorted facts.

2. p. 6. ”They (Turks) were lacking in what we may call the fundamentals of a civilized community. They had no alphabet and no art of writing; no books, no poets, no art, no architecture; they built no cities and established no lasting states.”
3. p. 50. ”The only reason for relating such dreadful things as this is that, without the details, the English-speaking public can not understand precicsly what this nation is which we call Turkey.”

Sukru Aya writes in his book that Morgentau’s claims were refuted by George A. Schreiner, a distinguished foreign correspondent who served in Turkey at the time and who knew the Ambassador and wrote to him about his concerns on how the truth was twisted to favour the Armenians.

A book on the relations between the Netherlands and Turkey published in 2007 makes reference to the Dutch Reporter George Nypels who has stated in 1922 that “Ambassador Morgenthau’s widely read book was now judged to be ill-founded.” The book, the Netherlands and Turkey: Four hundred years of political, economical, social and cultural relations – selected essays” also states that the writings of the former US Ambassador were refuted by Ahmed Rustem Bey, a former Ottoman Ambassador to Washington. These are not mentioned in “Genocide of Truth” which could be issued as an addendum, including the addition of Morhentau’s books “The Murder of a Nation”, “Secrets of the Bosphorus” and “Ambassador Morgenthau’s Story” to the Bibliography.

This is a valuable book that will show the readers the other side of the story and every concerned Turk and Turkish American who would like to see an end to the tall tale of Armenian genocide should read it in order to bring out the truth about the Armenian issue and set the record straight.

End of Part I.

Book Review with Questions: Islam Without Extremes: A Muslim Case for Liberty

On the Roads of Anatolia and Thrace, Turkey Hacikiri (Vardiha) Bridge...