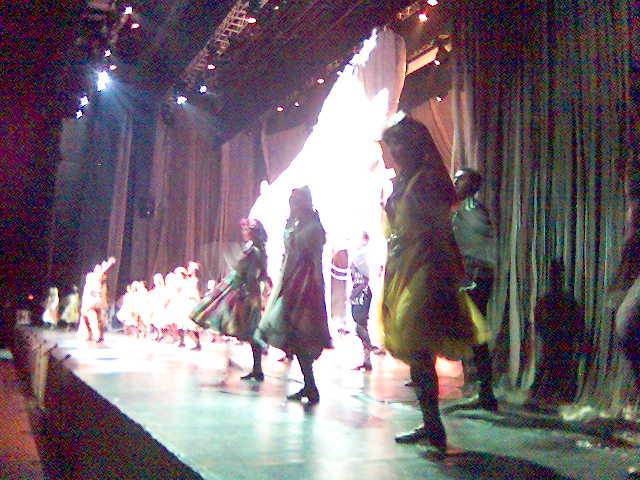 At ten past nine pm on Saturday night, over 4500 spectators were ready for the opening of the curtain for another great show by the producers of “Fires of Anatolia – Anadolu Atesi” at the old Maydonose Showland Tent, now Istanbul Gosteri Merkezi. TROYA, the epic story that has been told in many different ways, firs in Homer’s Iliad, later in a 1956 movie, “The Helen of Troy” and in 2004, “Troy.” The musical show TROYA was first staged on April 8, 2008, by the Turkish dance group consisting of 120 dancers, several choreographers and other technical staff after four years of preparation, according to the creator and the producer of the show, Mustafa Erdogan.

First, a large map of Anatolia with the names of historical towns appeared on the curtain, showing Ephesus, Knidos, Tarsos, Likya, ewtc. and Ilios/Troia. There was a large replica of a high wall in the background and an all women dance group opened the show with a beautiful music in the background.

The show was presented in two parts, the first in five scenes, the second in eight. The first scene was a market, visited by traders from many countries, where the Palace guards perform for the public. This was followed by a scene showing meeting between Paris, who was raised in the forest by shepherds and his brother Hektor who he has not seen for many years, which turns into a lifetime friendship.

The second scene opens with a fight between the soldiers of Troy and Akha, each side supported by different Gods, who start the battles and also want to determine the results. Cassandra, probably the first learned woman of Anatolia, knows what is happening and prophesies that Troy will be burnt to the ground, but no one listens to her.

In the third scene, the most beautiful woman from the other side of the sea comes, Helen, born in Sparta, to the magnificent palace of the east and marries the most handsome man Paris from Troy. Two boats representing hundreds are pulled to the stage, fighting the sea battle that brings many different tribes formed Anatolia together to fight the enemy, just like the Dardanelles sea battle and the Gallipoli operation 3000 years later fought by the Turks against the British Empire.

The first scene of the second part opens with Hektor’s farewell to his wife and child, the youngest member of the cast. This is followed by scenes of battles and a dance of the skeletons, beautifully performed. Achilles manages to enter the city and kills Hector, considered the first hero of Anatolia, even prompting General Mustafa Kemal to state that Hector’s revenge was taken after winning the Battle of Gallipoli in 1915.

Following the death of Hector, his comrades gather under the leadership of King Priamos and defeat Achaeans (Akha), who retreats leaving a wooden horse behind. A huge white replica of the horse is drawn to the centre of the stage and after celebrations, the Trojans go to their homes. Achaean soldiers descend from the horse and open the city gates and Troy once again becomes the scene of another battle, danced with close to a hundred performers around the horse to a piece of beautiful music and the show ends with thundering applause.

The exact date of the Trojan war is not known, but the famous Izmir born Herodotus place it to 1184 BC. In the Iliad, Homer writes that the Achaeans set up their camp near the mouth of the river Scamander near modern Karamenderes, with the city of Troy across high on a hill, where the battles of the Trojan wars took place.

The visitors to Troy can see the wooden horse displayed at the park. The wooden horse of a different design that was used in the movie, Troy, is on display in Canakkale, on loan for a year. Troy and environs were added to the list of Cultural Sites in 1998 (one of 9 sites in Turkey, including Safranbolu.)

The “Fire of Anatolia” group has performed in more than 40 countries, from the USA to China, to Japan, to an audience of over 6 million people since its founding in 2001, and their fame has found its way to the Guinness Book of Records, for the fastest dance and the number of spectators. The first time that I was introduced to the show was in Ephesus – Efes, on August 26, 2001, “dance of the Sultans – Sultanlarin dansi”, driving over 600 km from Istanbul in order to see the “greatest show on earth” according to an American doctor who was among the spectators with other 500 doctors who happened to be in Izmir for a convention.

Spectators from Canakkale and the regions once known as Troi around the town of Truva were among the audience, including Nebil Ozgenturk, the curator of the “Turkiyenin Hatira Defteri – The Memory Book of Turkey” on CNN Turk, Haluk Sahin of Radikal, and Safak Aya, a niece of Sukru Server Aya, the author of a monumental book on another story of Anatolia.

Mustafa Erdogan is a controversial artist, according to some newspapers, but he has done a great service for his country by conveying a true image of Turkey (Anatolia I suppose) abroad. The musical has an international support team, including Christopher Ash and Andrew Wilder of Luxious Lighting from the USA, Jan Holzner of Barrandow Studios and Smecky Soundstage, James Fitzpatrick of Tadlow Music Ltd and many Turkish creators, such as Serdar Basdug, responsible for incredible dresses worn by the dancers. The music is performed by Prague Philharmonic Orchestra and Chorus. It was a beautiful show with incredible dancers performing in beautiful dresses.

Congratulations and thanks to everyone who has made this a reality. A must see for everyone who visits Turkey, and of course all interested Turks of all ages.