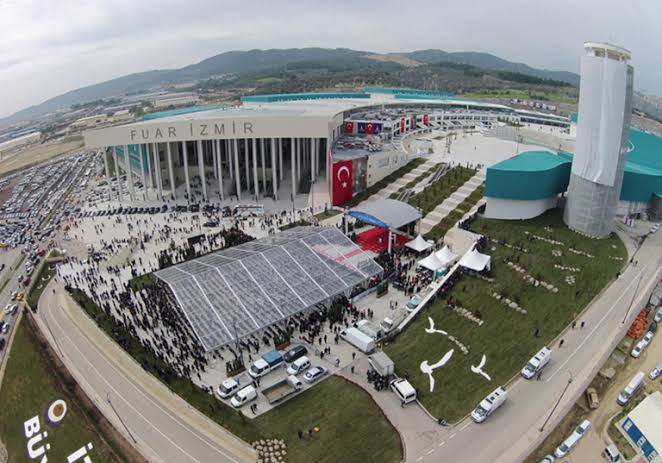 Izmir hosted the 77th International Fair between August 21 and 29, which lasted nine days. The last time I visited the Enternasyonal Izmir Fuari (EIF), as it is advertised in Izmir, was back in 1975 while completing my compulsory four-month military service in the Turkish Jendarme training division in Devrek.

Fairs are events where technological innovations and new products are exhibited. Professionals from different regions of Turkey and many foreign countries come together and establish commercial relations. Fairs also host concerts and many social activities, providing entertainment to the locals and also thousands of visitors that come to the fair.

The establishment of IIF goes back to the times of 1st Izmir Economics Conference held in 1923 at Mustafa Kemal Pasa’s orders, where he stated, “Organize fairs and exhibitions in this city.” (Photograph 1). The first International Fair opened its doors in 1931 and has been held continuously for 77 years, gaining the title as the biggest general trade fair in Turkey and attracting attention from around the world. This year there were over 800 exhibitors and over 60 countries were represented.

When I visited the fair on August 24, 2008, the large fairgrounds were packed with visitors of all ages, most at the food stands near an open-air concert arena where a group was performing. It was interesting that at the Izmir gate, the visitors were greeted by beautiful girls wearing wedding gowns as part of an advertisement of one of the companies. There was a stand where new heaters were being displayed, but it was almost completely deserted.

I walked into the Exhibition hall, looking first for the stand of Karabuk/Safranbolu which was the guest of honour city of this year’s fair. There were huge photographs of various towns of Karabuk, including Eflani, Safranbolu and Yenice, many stands selling the famous Safranbolu Lokumu (Turkish delight) and many handcrafted artworks. But this year, there was also a stand where KEMSAN from Karabuk was exhibiting locally manufactured electric motors. Kaan Kalyoncu, an electronics engineer told me that they have been in business for 15 years and their electric motors were being exported to many countries as well. I was told many years ago that the industrial revolution in Japan was started by building electric motors. Although it was the only industrial company exhibiting at the Karabuk stand, the stand of Kardemir, the privatised Iron and Steel Company which was established back in 1937, also at Mustafa Kemal Ataturk’s orders, as located next door.

In the international exhibition area, Cuba was the guest of honour country, with cigar and rum-filled cabinets, but none was for sale. Bosna-Herzegovina had photographs of many historical places including the famous Mostar bridge in. When I told the exhibitor how beautiful the Ottoman built arch bridge was, he asked me why I had not visited the place yet. I promised that I would.

At the international fairs, I usually look for the stand of Singer, an American idol which has been in Turkey for over 100 years. My father worked for Singer back in the 30s and told me that his salary was paid by Singer while he was serving in the military. The singer had a big stand at the fair, showing off many new products. Next to their stand was the Japanese sawing machine maker Brother, with a bigger stand and more sewing machines, some with computers.

When it is coffee time, I usually look for Starbucks, where my son works. They were not at this fair, neither was IBM, where my older brother worked for close to 40 years, despite the fact that IBM is celebrating its 70 years in Turkey. IBM has an interesting history which goes back to the early 19th century. Their office in Turkey was established in 1935 with one representative. However, its registration in Turkey as “” Watsons Business Machines Turk Ltd. Sti” was published in the Turkish Republic Commercial Gazette in 1938. In 1944, the company changed its name to IBM Turk and provides technical and innovative services in Turkey even today.

IBM’s headquarters is in New York and has over 386,000 staff members in 170 countries. Its gross sales in 2007 were $98.8 billion, according to Milliyet, has seven research centres around the world and has won 5 Nobel prizes.

Fairs are a lot of fun which is like a window to the country and the world. I hope many will be visiting the Izmir International fair before it closes its doors on August 29.