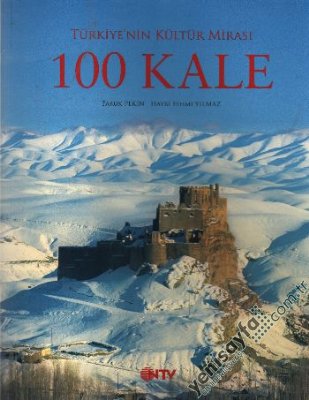 Turkey is home to unmatched geography and historical and cultural heritage. The greater landmass, Anatolia (Anadolu), referred to as ‘’where the sun rises’’, is also known as the ‘’Cradle of Civilisations’’… Many different people, tribes and ethnic groups have come and gone, met and mingled and created a new synthesis across Anatolia. Over the centuries, the most important factor for the groups has been security, which has resulted in building castles or fortresses in many cities and towns. No one has counted the number but is estimated to be well over a thousand, built high on top of mountains, side of hills and along the rivers.

NTV Publishing has picked 100 of the thousands of castles in Turkey and presented them with beautiful photographs in this new book, the first of its series on ‘’Turkey’s Cultural Heritage.’’

HOSAB Fortress photographed with snow across the hills is on the cover of the book. The castle with walls on its three sides is located high on a hill along the Van-Baskale highway and dates back to Urartu period. It became part of the Selchuk Empire in the 11th Century AD.
The castles included in the book begin with the Adanda Fortess near Antalya and ends with Zilkale located in the spectacular Firtina Vadisi near Rize. Afyon Kalesi is believed to be built around 1350 BC during the reign of the Hittites, which makes it 3,358-year-old structure. The Bodrum Kalesi is the work of the builders who came during the reign of the Crusaders and dates back to 1200 AD. The dates of many of the castles are not known since they go back thousands of years in history. Many have been restored and continue to be restored but hundreds of castles lay in ruins due to their ages.

Some of the castles, such as the Ankara fortress has mosques, bathhouses, dwellings and wells inside the walls. Some castles have been built in the sea, such as the famous “Kiz Kalesi” near Mersin which recently went through a restoration. Amasya Fortress, built around 4th century BC high on a hill in Amasya was home to the palaces of the Pontus Kingdom, which later was relocated to Sinop. Most everyone who visits Istanbul is familiar with the Rumelihisar fortress which was built by Sultan Mehmet the Conqueror in 1452 in 4 months before the capture of Constantinople in 1453.

One of the most spectacular castles is the Anavarza Fortress located near Dilekkaya village along the Ceyhan-Kozan highway in Adana. It is believed that the fortress was rebuilt by the Abbasi Khalif Harun El-Rasid in 796 AD and was attacked by the Crusaders in 1097. During the 11th and 12th centuries, AD, the castle was restored by the Klikya Armenians. Among several other fortresses built by the Armenians is the Ani City Walls with churches, buildings and dwellings inside, located near Kars. Ani was captured by the Selcuk Sultan Alp Arslan in 1064 AD who built additional walls and new gates.

The Ankara Fortress has been the symbol of the city which dates back to the times of the Hittites. Some historians believe that the castle was built by King Midas of the Frigya Kingdom. The castle at Antakya was the capital of the Selekuos Kingdom established around 320 BC by one of the generals of Alexander the Great who also built Antakya, known in the west as Antioch. The region became a part of the Ottoman Empire in 1517 during the reign of Yavuz Sultan Selim.

The longest city walls are located in Istanbul which dates back to the early Byzantium times. The city walls are categorized under five sections: The Byzantion walls, Septimius walls, Constantinus walls, Theodosius walls and the walls that surround the Topkapi Palace, Sur-I Sultan. There are also the Galata walls and the Anastasios walls between the Black Sea and the Sea of Marmara. These walls are being restored which are in the UNESCO List of Cultural Sites.

Above are just a few samples of the many castles that are found all over Turkey. Thanks to NTV Publishing and the authors Faruk Pekin and Hayri Fehmi Yilmaz, those interested in the cultural heritage of Turkey can read and see the beautiful photographs of these structures and visit the sites.

An Interview by “Le Monde” with Bernard Lewis By: Ayhan...