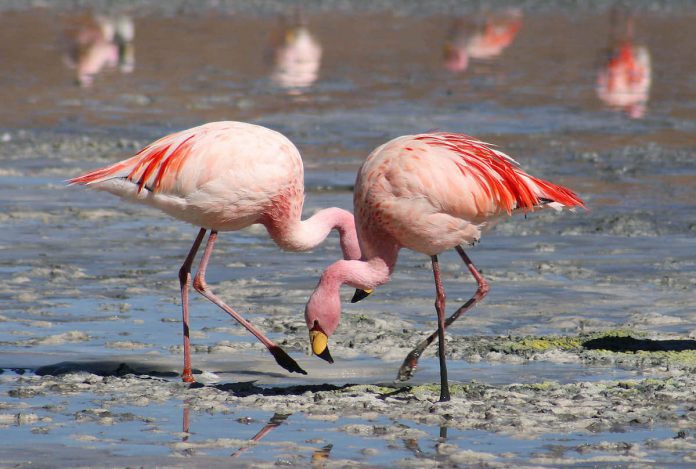 The name PHOINIKOPTEROS is the Greek word for the bird called “flamingo“, [Divry’s Modern English-Greek and Greek-English Desk dictionary, 1988, p. 731].

When the name PHOINIKOPTEROS is rearranged (deciphered) letter-by-letter as “PEN-POIO-KOSHTIR“, we see that it is an anagrammatized, Hellenized and disguised form of the Turkish expression “BEN BOYA KUŞTUR” defining a colored bird.  It literally means “I am paint bird” , that is, “I am colored bird”.  As described in the above reference, Flamingos are “pink” or “red” colored birds”.  Thus, this Turkish phrase, which has been anagrammatized into a so-called “Greek” word, is a correct description of the flamingo bird (see picture above).  Clearly this is another Turkish phrase that has been usurped and used by Greek linguists to make up this artificial “Greek” name.

Evidently, this stolen Turkish phrase did not stay with the Greek language, but it also got promoted to being the so-called “scientific” name Phoenicopteridae defining the family of the flamingo birds.  In other words, one stolen linguistic term has been used to build up another stolen linguistic term.

When this supposedly Latin scientific term PHOENICOPTERIDAE defining the family of these birds is rearranged (deciphered) letter-by-letter as “PEN-POIA-CETH-OIDER” (where the letter “C” is “K”, and now letter “T” is a deceptive replacement for letter “S” in the Turkish text being anagrammatized), we see that the deciphered expression becomes “PEN-POIA-KESH-OIDER“.  But this deciphered phrase is an altered form of the  Turkish expression  “BEN BOYA KUŞ ÖYDER” meaning “I am the house of the paint birds”, that is, “I am the family of paint birds” – which is exactly what this ‘eye-catching’ scientific term PHOENICOPTERIDAE is all about.

Evidently, this Turkish phrase has been restructured, anagrammatized, Romanised and disguised into the form of PHOENICOPTERIDAE.  Yet no one knows that it was made up from a Turkish expression defining the family of these birds. The source text has been so well disguised and the public so well conditioned that everyone “knows” it as coming from “Greek” or “Latin”. This trick of restructuring linguistic material from another language, in order to make up new and artificial languages, is a very sneaky way of stealing somebody elses civilization, culture and glory.

Similarly, there is the English term FLAMINGOS which is also an eye-catching word. When the word FLAMINGOS is rearranged letter-by-letter as “MIN-AL GOS-F“, where letter S is the replacement for Turkish letter “Ş” (sh), we see that it is the anagrammatized, Anglicised and disguised form of the Turkish concept-defining expression  “MEN AL GUŞ” meaning “I am red bird” (I am pink bird) which is exactly what the so-called “FLAMINGOS” are.  The colour “pink” is a mixture of “red” and “white“.  Clearly, this so-called “English, Spanish and/or Portuguese” word has also been artificially made up from a Turkish phrase by way of anagrammatizing – contrary to all bogus explanations by the linguists.

Turkish words MEN means “I, I am”, AL means “red” and GUŞ (KUŞ) means “bird”.
Peculiarly, these differently structured words of different “Indo-European” languages are using similar Turkish expressions indicating that there was very close cooperation between linguists in formulating these so-called Greek, English and Latin words defining a pink and/or red plumaged bird and its family.  How clever, efficient – and sneaky!  Evidently, a linguistic and scientific fraud has been perpetrated intentionally where the Turkish language is endless motherlode, yet the Tur/Turk/Oguz people have been the victims since very ancient times.  Of course, those who knew about this deception were probably lulled permanently by time and by the secretive authorities.

I have been saying in my hundreds of writings, and each time proving, that the so-called “Indo-European” and “Semitic” languages, and possibly others too, have been artificially made up from the words and phrases of the mono-syllabic language of Turkish.  Those who read and understand what I am saying seem to be playing the game of, “ignore it long enough and it will go away”. But they are only conning themselves.  This will never go away.  Truth-seeking linguists will one day wake up and face the facts.

Allianoi, The Last Trip to the Ancient Spa in Turkey : Picture(240), Allianoi