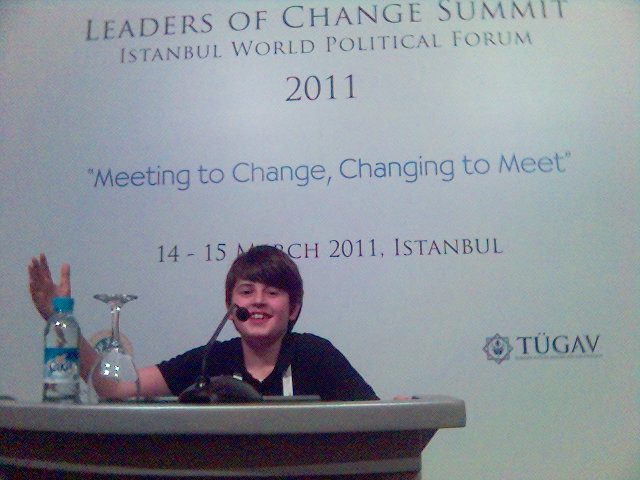 Observations from the Leaders of Change Summit at the Istanbul Convention Centre as Kofi Annan gets ready to deliver the final speech.

The youngest participant at the Leaders of Change Forum in Istanbul was an 11-year-old boy, wearing a protocol tag with a name Konur Alp Ozguc, K was handwritten in front of Onur which was his father’s name on the tag (Attached photograph).

I asked him how he liked the Forum. He said he was very excited because he shook hands with both Al Gore and Kofi Annan. As he was playing around the speakers’ platform, I asked him to recite ”Ataturk’un Genclige Hitabı.” Is it ”Turkum Dogruyum Calıskanım” he asked. I said no, which is the final declaration in Ataturk’s Speech which is posted at every classroom of every school in Turkey, probably at Turkish schools abroad as well. Then he remembered but admitted that he did not know the words to it since they never read the stuff posted on the walls. Such is the situation with the new generation of young students in Turkey.

I told him that one of my grandsons was also 11 and in the 5th grade. I asked him what course he was taking at school. He said, Mathematics, Literature, basic courses. When I asked him what language he was learning, he said Russian and English but could not say anything in any language.

I also had a chance to shake hands with Kofı Annan and ask him who was the greatest leader of change in the 20th century. Holding my hand, he said, ”Ataturk of course.” Then I commented that yes he was the greatest leader but his name did not come up during the summit, not even once I said, adding that the new Convention Centre does not have a picture of Ataturk.

As Kofi Annan went to the huge Audatorıim enough to hold 2,000 people to delıver his speech, I came to the Press Room to write this. I am sure the number of listeners was no more than 100, not including Steven Kişnzer who left the soft during cocktail hour early. I learned quite by chance that President Gul was not coming to the Summit to deliver the closing speech.

Yuksel Oktay
At the Press Center of Istanbul Convention Center

An Open Letter to the people of the United States of...