Home General Articles Books & Reviews A Year in the World – Journeys of a passionate Traveler By... 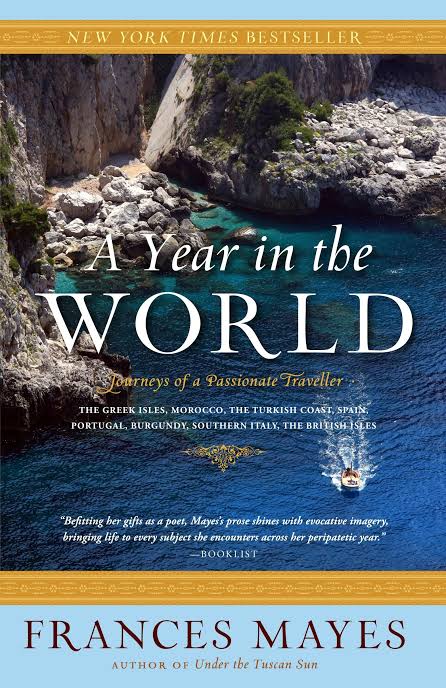 The author of the famous book, ‘’Under the Tuscon Sun,’’ has written about her travels in several countries around the Mediterranean Sea, including a cruise in a traditional wooden gulet along Turkey’s Lycian coast. The voyage begins in Andalucia in Spain, goes through Portugal, Italy, Fez, Burgundy, The British Isles, Islands of Greece and tells about a different experience spent aboard the Cevri Hasan gulet from Antalya to Kusadasi in southern Turkey for ten days.

The chapter on ‘’Turkey’s Lycian Coast’’ begins with two quotations:
‘’I’m inside the advancing light, my hands are hungry, the world beautiful’’ by Nazim Hikmet.

‘’Is the one I love everywhere.’’ by Rumi (Mevlana Celalettin-i Rumi)
The voyage begins in Rome with a flight to Istanbul (reading Mehmet, My Hawk by Yasar Kemal on the way) where Frances Mayes and her husband meet three of their friends who will go on the gulet with them.

They visit historical places in Istanbul and have dinner at a restaurant where whirling dervishes perform and shop at the Grand Bazaar. As they drive towards the Dolmabahce palace, Frances Mayes glimpses along with wall photographs of Ataturk.

The taxi driver reminds them that they are passing the palace where he died. Remembering the reforms of the first President of Turkey, Frances Mayes wishes that ‘’they had an Ataturk in America today.’’ (p. 343)

Their highlight in Istanbul is the Suleymaniye Mosque and its cemetery. Following an early wake up with the call to prayer from a mosque across from their hotel, the group takes a plane to Antalya, Frances Mayes devouring Philip Mansel’s ‘’Constantinople: City of the World’s Desire, 1453 – 1924.’’ At the airport, the group is met by their guide, Enver Lucas, a Turkish-American. Ian, one of the members of the group, has taken the same trip with Enver years ago and brings his granddaughter on this voyage to experience his memories.

In Antalya, they visit Perge and drive to Aspendos (where the 29th International Children’s day festival will take place this year April 16-23) and stop at a local market to pick up groceries and wine.

They board the boat, Cevri Hasan, their home for eleven days where they are greeted by the captain and his two crew. Frances Mayes promises to start her ship’s log, knowing that this is a bit minor to Columbus’s account of his voyages and believing that ‘’all trips are voyages within as well as without.’’

They sail out of the harbour in the late afternoon, drop anchor in a small cove for a swim in the dark while the dinner is prepared on the boat. As they watch the full moon, they see fireworks celebrating the anniversary of Ataturk’s defeat of someone, telling her friends: ‘’I hope it was not the Armenians.’’ The next chapter continues: ‘’Ah, Ataturk, I have a longing for you.’’ Then she imagines her mother of eighteen, invited to the embassy in Istanbul, meeting Ataturk at a dance.

The gulet travels along the shore makes frequent stops so the voyagers can visit interesting places, swim and stop at Cirali, where Enver’s in-laws have a house.  In the town of Myra, they visit the Church of St. Nicholas. They moor late in Kekova, an island of submerged harbours, tombs, and buildings and climb the hill above the village to look at the ruins of a Crusader castle.

After stopovers at Kalkan, Cemile Adasi, Fethiye, Dalyan, Koycegiz, the group disembarks at Marmaris and take a bus to Aphrodisias. The gulet finally arrives in Kusadasi on day 10 and the group visit Ephesus. And the end of the trip, the famous Blue Voyage.

The group goes to Izmir and fly back to Istanbul to spend another day at their little hotel. They visit the Blue Mosque, the Byzantine Cistern, and Hagia Sophia. Towards the end of the chapter, Frances Mayes again makes references to Ataturk, imagining that Mustafa Kemal whispers to her, ‘’America, America.’’