Home General Articles Culture On the Roads of Anatolia and Thrace, Turkey Hacikiri (Vardiha) Bridge on... 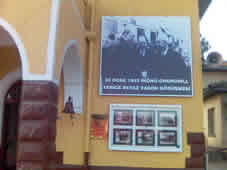 While attending the Talas and Tarsus American Highschools in the fifties, we used to travel from Safranbolu to Karabuk by car and then on to Kayseri and Tarsus by train, which was the main means of transportation across Turkey during those years.

We would change trains in Irmak and continue to Kayseri and take a bus to Talas nearby or wait for one of the teachers to come and pick us up.

Travelling to Tarsus, we would change trains in Yenice, a small town made famous by the meeting of Ismet Inonu with Roseweltt and Churchill at the train station in 1943, during the heydays of the second World War. A large photograph of this famous meeting hangs on the outside wall of the train station in Yenice(Photo 1.)

The Istanbul – Adana and Konya – Adana – Mardin railways are part of the Baghdad railway, built between the 1890s and early 1900s by German Philip Holsman Company.

These are also a continuation of the Baghdad – Hedjaz railway. The most important crossing points of the railway are the Taurus tunnels (over 12) and the Hacikiri bridge, built over a deep valley, between Pozanti and Yenice.

After the stop at Pozanti, we would gather in front of the train windows to get a glimpse of the Hacikiri bridge, which is on the Belemedik – Duran section which was opened on October 9, 1918. After close to a hundred years, the 100 meters high and 200-meter long bridge, built with masonry,  and an engineering masterpiece, is in excellent condition, making it one of the most valuable and historical structures in Turkey and the world (Photo 2.)

Early in September this year, after visiting Tarsus, we decided to drive up from Yenice and visit the Hacikiri bridge.

The narrow road that goes through several villages and follows the railway on the side has recently been enlarged after Bucak, connecting to a narrow passageway cut through the sharp rocky slopes of the mountain near the gorge where the bridge is. Right next to the railway, there is a small cafe and a pathway that allows the visitors to view the spectacular bridge, which is still in use today.

The Hacikiri bridge is also known as the Vardiha Bridge by the locals, which has a story behind it. Sitting at a coffeehouse in  Bucak on the way to the bridge, the villagers told us that many Germans lost their lives during the construction of the railway.

One day, a German engineer slips and falls from the top of the bridge, hitting the valley below after close to a minute, prompting one of the helpless Turkish workers to comment ‘’var diha – he arrived’’. Since then, the locals have been calling the bridge ‘’Vardiha.’’
Kanal B TV station ( by Baskent University in Ankara) has been advertising a documentary, called ‘’Gecmisden Gunumuze Demiryollari – Railroads from the Past to the Present’’, which is to be shown soon which most certainly will include the Hacikiri bridge.  Earlier, a documentary on the Baghdad railway and the Hacikiri Bridge had been made by a German TV station.

The first railway in Turkey was built by the British between Izmir and Aydin in 1856, more than 151 years ago.

This modest line was followed by several short runs built by other foreign companies, except the Istanbul-Tuzla portion was built by the Ottomans. After this line was completed in 1872, it was transferred to the British company to complete the remaining portion towards Ankara.

The famous Baghdad railway was initiated in 1888 by the German company Philip Holtsman and completed in 1918. Certain sections of this historical railway are still in use and efforts are underway to re-build the sections that were destroyed during the war.

The major portion of the railway system in Turkey was completed during the early years of The Republic and Ataturk, who used to travel by train across Turkey, was the force behind it. The building of railways, neglected for many years, is again picking up momentum, with sections between Istanbul and Ankara being upgraded for fast trains (during a test run last month, trains ran at over 270 km per hour).

We pray that the train accident that shocked Turkey on Jul 22, 2004, with 39  passengers killed will never happen again.

Train travel is fascinating, especially for the graduates of Talas and Tarsus American high school students who travelled to Talas and Tarsus from many towns and cities across Turkey, including Yerkoy and Konya.

Every night during the school year and exactly at 7:00 PM, it was customary for the student near the door of the study room to open the door so the students could hear the train whistle, long and sharp, as the train would leave the Tarsus station.

The night train would begin its run to Ankara at exactly the same time every night, giving a chance to the students to listen to the train whistle before beginning their studies.

Anyone interested in railroads and the history of Turkey should visit the Hacikiri Bridge, which is an hour by car from Yenice, and not too far from Tarsus, especially next year when in 2008, Tarsus will be celebrating St Paul days. Pope Benedict XVI proclaimed in January 2008 as the Pauline Year and announced a series of ecumenical, cultural and linguistic events, as well as other social activities for St Paul, who was born in Tarsus almost 2,000 years ago, and according to many, the real founder of Christianity.

St. Paul travelled extensively in the Middle East, Anatolia and Greece. The foundations of St. Paul’s house is now part of a museum. Next year will also mark the 120th anniversary of the founding of Tarsus American High School in 1888 as St. Paul’s College.

A Shameful Act, The Armenian Genocide and the Question of Turkish Responsibility By Taner...

An Alternate way to solve the Armenian Issue Through the...