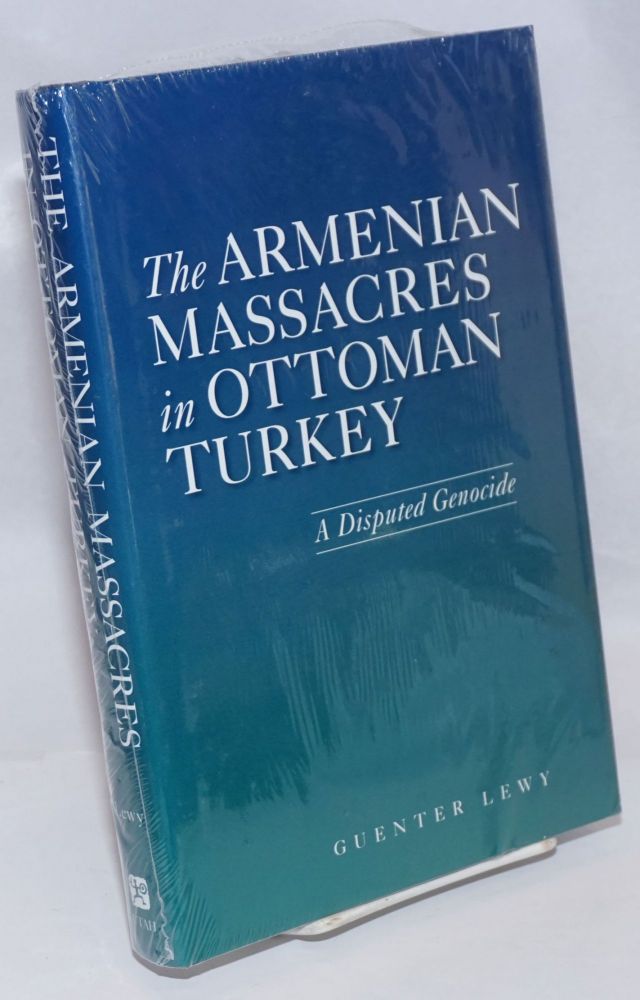 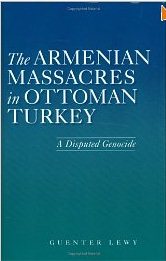 I re-read Dr Guenter Lewy’s book after learning that the 85-year-old Professor (born in 1923) would be making a presentation at the Springfield Public Library in NJ following the showing of Marty Callagan’s documentary “Armenian Revolt” on April 20, Sunday.

This time, I also read the footnotes, over 1240, and went over the references as well and decided to write a review for the benefit of those who have not read this important book which can be found in most libraries in the US.

The book was published in 2005 by the University of Utah Press and Dr Guenter Lewy had first spoken about the book and the Armenian issue at the Gazi University Conference in Ankara in 2006. In fact, I had met the author during the conference and had a chance to convey to him some of my concerns on the book, especially its title, suggesting that the “Armenian Revolts” should also be made part of it..

The 272-page book consists of four parts and 13 chapters, beginning with the historical setting, the Armenians in the Ottoman Empire during the nineteenth century and the Armenian revolutionary movement, with footnotes presented in almost 60 pages at the end of the book.  The 25-page list of references is presented under “Works Cited” since it would probably take another 350 pages if all the books and articles written on the subject would be covered, which leads to my first criticism.

The author states that many more books have been written by the Armenians and their supporters than the Turks and their supporters but does not mention the fact that “there are hundreds and perhaps thousands of organizations around the world which are funded and supported by the Armenians and many universities and so-called genocide scholars work almost exclusively to prove that the massacres were a genocide since it fits their agenda.”

Very few books by Turkish authors are referenced in the list of works cited and Prof. Dr. Turkkay Ataov, who has published close to hundred books on the subject, is mentioned only once and that in a critical way.

Bilal Simsir, Esat Uras, Kamuran Gumrun, Sonyel, Ahmet Emin Yalman, Justin McCarty  are mentioned a few times but the works of Dadrian (close to 20 of his works alone in the references), Hovanassian (close to 15 of his works), Pastermadjian, Sarafian, Kaiser (6 of his works) and yes, Taner Akcam, are used throughout the book who state that genocide was committed by the Ottoman Turks. Of course, at every chance, reference is made to Amb.

Henry Morgenthau and his memoirs “Ambassador Morgenthau’s Story” but no mention of “The murder of a Nation”, which is the chapter on Armenians published as a book by the Armenian benevolent Association.

Anyone who is not familiar with the real contents of these books and their main goal and the Armenian issue may easily conclude that “there is no disputed genocide, it was the 20th century’s first holocaust as Prof. Bernard Lewis wrote in his 1961 book, “The Emergence of Modern Turkey” but changed his mind later, and Robert D. Kaplan in his book “Balkan Ghosts – A Journey Through History (p.63), who masquerades around as a friend of the Turks.

The Armenian revolts are mentioned in the book but without going into the details of those uprisings which was the cause of the massacres and the relocation. Therefore, a better title for the book would have been, “The Armenian Revolts and the resulting Armenian Massacres in Ottoman Turkey.”

The majority of references cited on the relocations are by the Western diplomats and Chrisitan missionaries from several countries who were at war with the Ottomans, and being Christians, were biased against the Muslims.

There was already a planned partitioning of the Ottoman Empire by the Russia and England and the diplomats and missionaries were reporting only what the Muslims did, ignoring the massacre of Turks. It is a historical fact that Armenians sided with the Russians and massacred Muslims in the villages and towns across eastern Anatolia, but the author refers to these as if they are “charged” and not real.

There is a passing remark about the Van rebellions but no mention of the massacres that the Armenians committed, killing over 30,000 Muslims and setting the city of Van to fire, just as they did in Izmir.

Almost all those who do not accept genocide believe that the Armenian revolts were a Civil war within a Global war”, which is rejected by the author. If it was not a civil war and the Armenians were, in fact, the fifth column fighting on the side of the enemy, what was it? Armenians were killing Muslims in order to create a state of their own on lands where they were never the majority, but this fact is not mentioned forcibly.

Throughout the book, 1915 relocations are referred to as deportations, as if the Armenians were sent outside the national boundaries, something a casual reader would miss.
The author mentions Musa Dagh on the Mediterranean coast where they are supposedly fought off Turkish troops for fifty-three days and refers to Franz Werfel’ fictional novel “Forty Days of Musa Dagh” as “the story of the heroic resistance of a small Armenian village (p.106 and 262) when in fact they were responsible for the uprisings across the eastern and southern Anatolia.

When referring to the Turkish gendarmes, the author states that they were known to be ignorant, corrupt, and poorly trained. The whole country was a war zone, Turks were fighting on four fronts for their very survival, including at Dardanelles and Gallipoli in the same year 1915, which to some had a great influence on the relocation decision, but covered very lightly by the author.

In “Epilogue”, the author makes the following statement: “The Treaty of Lausanne, signed on July 24, 1923, ended the dream of an Armenian state that would include the eastern provinces of Anatolia, the heartland of historic Armenia, and Cilicia.” The background of this Armenian dream is, of course, the Serv Treaty imposed on the Ottoman Government by the Allies at the end of the First World War and based on plans invented by President Woodrow Wilson, which of course was totally unjustified.

The author does not mention the Serv Treaty which was never ratified and the Lausanne Treaty was a victory for Mustafa Kemal who established the Republic of Turkey on October 29, 1923. It would probably take another book to explain what has been omitted and not presented truthfully in this book. For example, there is only a passing reference to Mustafa Kemal Ataturk but no mention of his famous remarks on the Armenian issue:

“Civilization and humanity should once more be enlightened regarding the alleged Armenian massacres and the purpose of the propaganda created to mislead the world. These are the results of resentment and anger from detestable vicious accusations.”

A Shameful Act, The Armenian Genocide and the Question of Turkish Responsibility By Taner...

An Interview by “Le Monde” with Bernard Lewis By: Ayhan...